With general election looming, finality for Deschene’s chance to remain a presidential candidate may come today 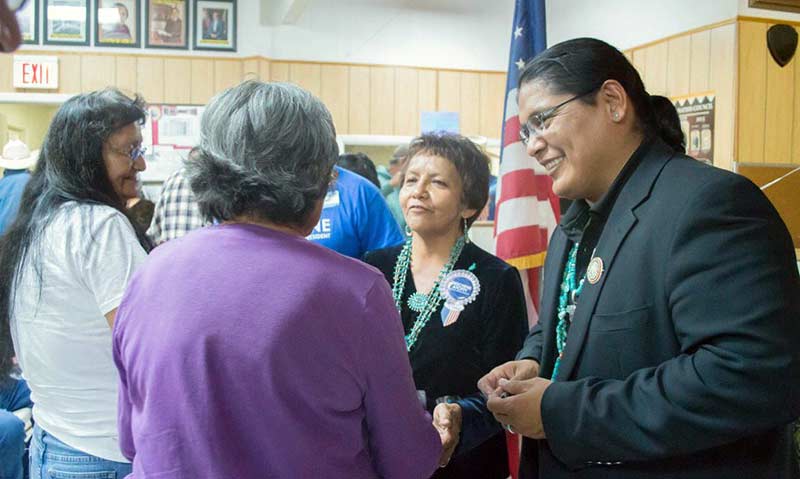 Embattled Navajo presidential candidate Chris Deschene’s hopes rest on Monday. He will find out, once and for all, if his name will stay on the ballot.

His hopes of staying alive rest is in the hands of his attorney, Brian Lewis, the Navajo Supreme Court, the Navajo Nation Council and, possibly, the Office of Hearings and Appeals.

However, the Supreme Court could make a decision before then.

Since his Oct. 9 hearing at OHA, two new players have entered the game on whether or not he is fluent in the Navajo language.

At that time, Deschene went head to head with his opponent’s attorneys on three questions, two of which were asked in Navajo.

OHA’s chief hearing officer Richie Nez made his ruling and disqualified Deschene because ” by clear and convincing evidence that by refusing to answer questions which will lead me to pass on whether or not Mr. Deschene is fluent.”

Nez, in his written ruling, disqualified Deschene and added that OHA “expects the Navajo Elections Administration to (replace him) with the candidate who received the next highest votes” during the primaries.

On Monday, the Navajo Board of Elections held a special meeting and voted to not replace Deschene.

“The people have a right to choose the leader of their choice,” NBOE supervisor Jonathan Tso said.

Sometime soon after, Navajo Nation Council Delegates Leonard Tsosie, Danny Simpson and Lorenzo Curley began working on their own bills to address the how Titles 2 and 11 worded fluency and the rights of Navajo voters.

While Tsosie’s and Simpson’s bills focus on the rights of voters, Curley says his will focus on the deleting the word fluency all together.

“Mine is basically a straight forward “ok let’s do away with language requirement” for the president, council delegate, chapter president, and school board members,” Curley said, Thursday night in Klagetoh. “Title 2 speaks to precedence. It says in Title 2 that all you need to be is Navajo, you need to live on the Navajo nation, and be 35 years old. Doesn’t say anything about language. Whereas Title 11, that’s where you find the requirement. Title 2 is the big law. We call it the big law because Supreme Court has said it’s organic law. It trumps everything else. It’s almost like an unwritten constitution. All legislation, regulations or laws our there has to conform with Title 2. So does Title 11 consistent or conforming to Title 2?”

Curley went onto explain that council wants to help and to get it resolved. “We talked about how we can help. Best way to do that is, perhaps, do a legislative fix. Take away the fluency. It’s not to help Chris (Deschene) or to help Joe (Shirley Jr) in some ways. It’s to address the potential conflict that can happen. The ruling by the Supreme Court concerns me because it opened the door to allow somebody – after the election (after all is said and done) – can nullify the whole process. We can’t have that.”

Navajo Nation Council Delegate Leonard Tsosie also stated that there needed to be a finality in the deciding process.

“There’s gotta be finality in these decisions. And these decisions cannot be delayed. This is where the courts were at fault,” Tsosie said. “My legislation will say that if you do not make timely decisions, whether you’re OHA, or the Navajo Supreme Court, you lose jurisdiction. Then you leave it to the Navajo people to decide. Also what bother me is the disenfranchisement of Navajo voters. You cannot just have 9,800 votes and throw it away. If you really believe in democracy you have to also respect that. In this case the Navajo people said we want former president Joe Shirley Jr and Chris Deschene to run against each other.”

Tsosie also said that the issue on fluency has divided the generation between young and old. “It bothers me when you have the world honoring a 17-year-old Pakistani girl, appreciating the work of the youth. And then you have the Navajo Nation pushing away the youth. That’s very troubling. We shouldn’t be doing that. We should be compromising with the younger generation. There’s a place for both youth and elders at leadership table.”

Tsosie’s emergency bill is expected to be introduced on Tuesday during fall session while Curley’s bill, which is not an emergency bill, will go through the normal steps of process.

While all parties quietly worked through the technicalities of Navajo law, the Annapolis Naval graduate spent his Thursday evening speaking and listening to his supporters cheer him and encouraging to stay in the fight at the Klagetoh Chapter in Klagetoh, Ariz.

“Council is moving something. We hope they will. NBOE supervisors did the right thing. Fundamental law says the people have the right to pick their leader. Diyin bibeehaz’áanii k’ehgo ádáyiilaa. So it’s already done. So now we have to protect it. And that’s what the NBOE supervisors did. I’m very grateful because it’s protecting your vote.”

“We got one more move and that is an appeal to the Supreme Court probably on Monday. But we’ll see what happens. We’re gonna keep going. We are not gonna stop.”

The Navajo Nation Supreme Court, made an announcement today, that it would hold a hearing on Monday at 1 p.m. for a writ of mandamus filed by Dale E. Tsosie and Hank Whitethorne, against the Navajo Board of Election supervisors. The hearing will be held at the Navajo Department of Transportation building in Tse Bonito, N.M.

General election is two-and-a-half weeks away.