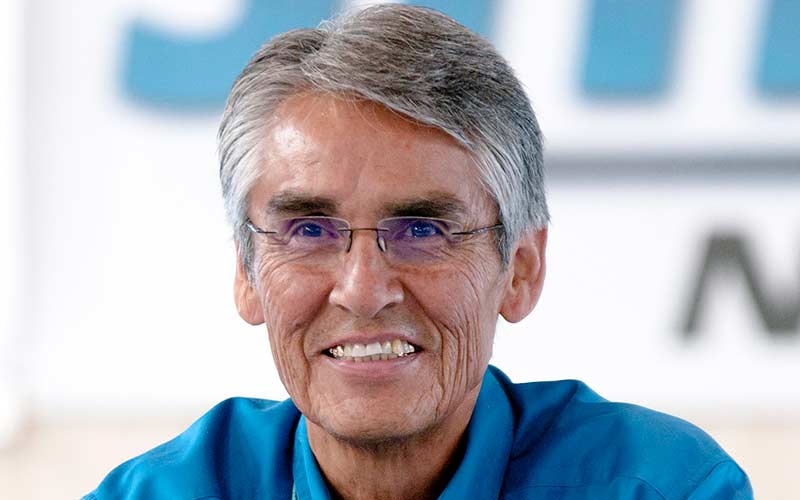 Navajo presidential candidate Joe Shirley Jr smiles as his supporters cheer him on during a campaign rally on Sunday in Sanostee, N.M. (Times photo - Donovan Quintero)

ABOVE: Navajo presidential candidate Joe Shirley Jr smiles as his supporters cheer him on during a campaign rally on Sunday in Sanostee, N.M. (Times photo – Donovan Quintero)

As the Navajo Supreme Court and the Navajo Board of Election Supervisors continued with plans to address the situation with Chris Deschene, his opponent, Navajo Nation presidential candidate Joe Shirley Jr., continued to campaign.

On Sunday he was in Sanostee at a rally, talking about issues from economic development to dealing with the reservation’s chronic unemployment problem. But he spent a few minutes after his speech addressing Deschene and the chaos that surrounds this year’s general election.

He said the whole dispute over Deschene and his lack of ability to speak Navajo hasn’t affected his concentration and he has stuck to his plans to just address the issues.

As for the recent Navajo Supreme Court decision saying that it was important for the tribe’s top leader be fluent in Navajo in order to preserve the language, Shirley said he “agreed with that wholeheartedly. We need that law to safeguard our culture and our way of life.”

There has been a lot of talk on Facebook and other social media in recent days by young Navajos supporting Deschene and saying that the ability of the tribe’s president to speak fluent Navajo wasn’t an issue with them, leading some to believe that throwing Deschene off the ballot will lead to a two tier system on the reservation, one of Navajos able to speak and their language and the other of Navajos who can’t.

Shirley, however, doesn’t believe that this will divide the tribe over the long run since “there are many young Navajos “who agree with me” on this issue.

Also at the Sanostee rally, Shirley received the endorsement of Samuel Sandoval, from Shiprock, a 90-year-old Navajo Code Talker who said he was supporting Shirley because he is assured that under Shirley, the tribe will step up and provide assistance to veterans and Code Talkers if they need it.

For a more in-depth story on Shirley, grab your copy of the Navajo Times newspaper this Thursday at your nearest newsstand.

A supporter of Navajo presidential candidate Joe Shirley Jr holds her signs up on Sunday during a campaign rally in Sanostee, N.M. (Times photo – Donovan Quintero)