Council votes to recess all items for fall session until Thursday 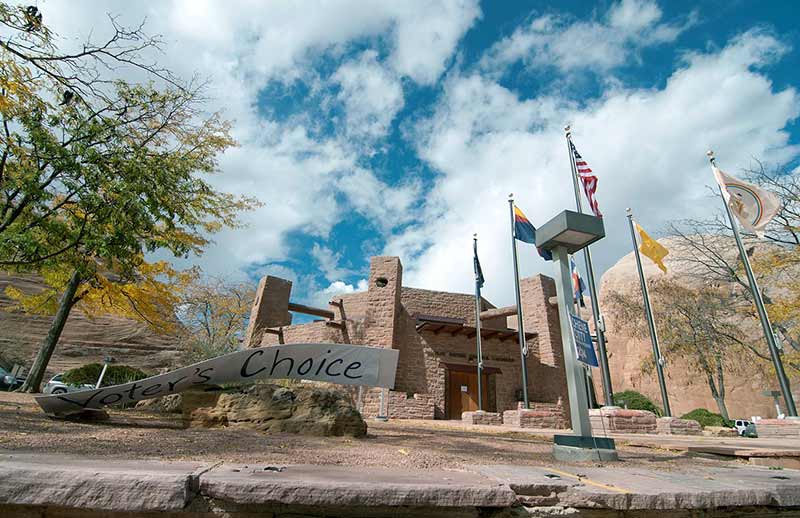 A "Voter’s Choice” sign is posted outside the Navajo Nation Council Chamber on Tuesday, Oct. 21, 2014, in Window Rock. Council recessed until Thursday so that the recently vacated seats of former Speaker of the Council Johnny Naize and former delegate David L. Tom, could be filled. (Times photo - Donovan Quintero)

Because there isn’t any representation from 12 Navajo Chapters to begin acting on the slew of bills listed on its fall session agenda, the Navajo Nation Council voted Tuesday to recess until Thursday morning.

By a close vote of 9 in favor and 8 against, the Council recessed until two seats – held by former Speaker Johnny Naize and Council delegate David Tom, who both resigned last month after pleading guilty to misusing thousands in discretionary funds – are filled.

Speaker Pro Tem Lorenzo Bates said that the Council voted in favor of the recess because the chapters that Naize and Tom represented as lawmakers are no longer being voiced on the Council floor.

“We’re going to try to get both seats filled and the question is does the Speaker Pro Tem have authority to appoint outside the chapter without any chapter resolutions,” Bates said.

To date, four of the five chapters Naize represented passed resolutions recommending Roland Tso for appointment to finish the former speaker’s term. Besides Tso, who is a grazing official for Many Farms Chapter, one of the chapters in Naize’s district also recommended another individual, which Bates didn’t know off hand.

“I’ll have it figured out by this afternoon,” Bates said Tuesday.

Asked if the Council decided to recess because they needed all 24 seats filled to begin addressing the bills that require two-third votes, the speaker pro tem said they could have begun legislative action Tuesday.

But, as the motioning parties suggested and subsequent 9-8 vote, it was better for the two vacant seats be filled until the Council proceeds with the rest of their fall session.

“The two-thirds would have been 15, but the argument is a number of chapters are not being represented,” Bates said.

Edison Wauneka, executive director for the Navajo Election Administration, told the Navajo Times that tribal law requires an appointment during the last 24 months of a term. The number of potential appointees, which is based off the recommendations from the respective chapters, is then selected by the Speaker, or in this case the Speaker Pro Tem.

Regarding the chapters Tom formerly represented that are in Northern Navajo Agency, Wauneka said that he hasn’t heard of the chapters organizing to recommend their appointments.

Council delegate Joshua Lavar Butler, who voted against the recess, said that the decision by the Council is in part pressuring the Navajo public to vote, essentially disenfranchising them into making a “hasty decision.”

In spite of the Council’s decision to recess, Butler added that the Council still has until Friday at midnight to address the number of bills listed on their agenda.

“We’re still in session until we reconvene,” Butler added.

For the nine legislators that voted for the recess, one of them was Council delegate Lorenzo Curley. He is the sponsor of a controversial bill that would eliminate the fluency of the Navajo language for elected positions, including the presidency and vice presidency posts.

“I felt that we need to fill those positions in a timely manner,” Curley said. “We only have 22 Council Delegates. We should have 24.”

Curley added that once the Council reconvenes Thursday they would address the old business items and the fluency bill he’s sponsoring, which is listed as the first item under new business.

“I’m sure there are people who have been selected,” Curley said the appointments for the two vacant seats. “Chapters can call a special meeting. It can be done in one day.”