A ‘motor’ that never stops: Diné resilience pays off for Florida athlete

David Descheene is a high school senior who loves playing various sports at Hollywood Hills High School in Florida. The recent setbacks due to COVID-19 haven’t dampened his enthusiasm for playing the sports he loves or any other outdoor activities he enjoys. 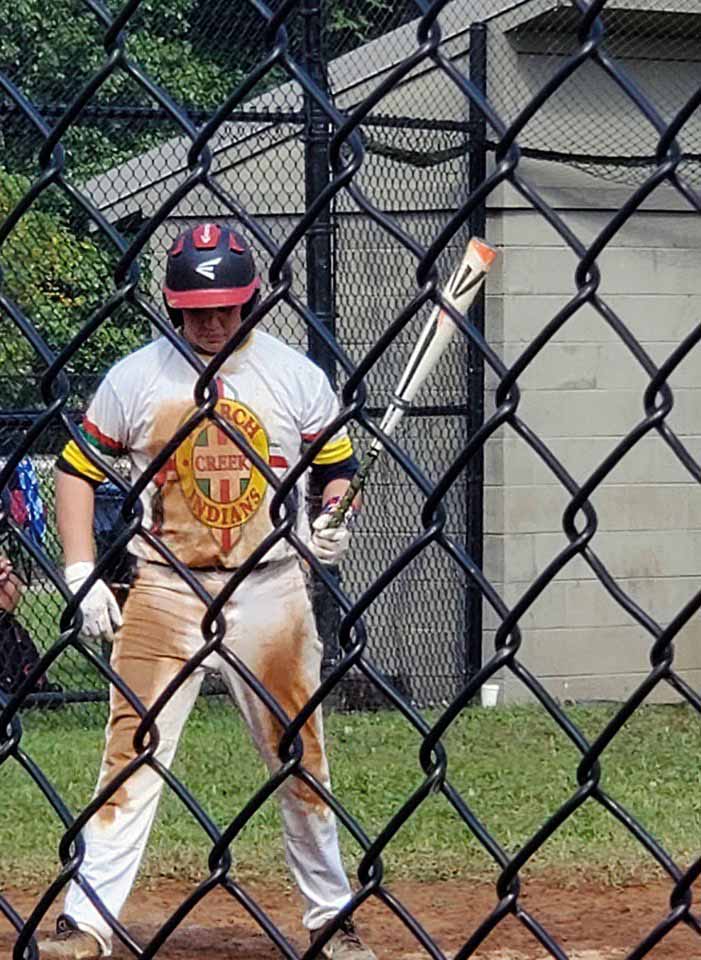 Submitted
David Descheene, a Diné with Shiprock roots, is a three-sport athlete at Hollywood Hills High School in Florida, competing in football, wrestling and baseball.

Kenneth Descheene, David’s father, originally from Shiprock, had traveled to Florida while working for a company in atomic energy. While in Florida, he started a family, having a daughter, Daisy Descheene, whom he coached in basketball. Ever since then Kenneth settled down near the Seminole reservation and worked there as part of their recreations department.

During that time, he also helped coach various sports including baseball, basketball, and football. During his 40-plus years in Florida, he would have three more kids, with David, now 18, being his youngest.

David had earned a lot of recognition as a smart student and a very athletic individual, but according to Hollywood’s head football coach, Brandon Graham, David stood out to him.

“The ones you remember as a coach usually have some undeniable trait that you can’t forget, and for David, it’s his passion,” Graham said. “Those who play the game call it a motor, and in his case, it never stops.

“The first real exposure I had to that was a spring game in which the other team decided on the first play that they needed to double-team him for the next four quarters or else they wouldn’t have a chance to move the ball. Despite the double team, he never stopped coming and made life a lot easier for the rest of our defense. We still won that game, and I started calling him ‘Double Team Dave’ after that game.

The reason a quality like that is important, the coach said, is that a season becomes a long marathon, and players start to get tired of the grind.

“You need a player who always comes to practice with excitement and a passion for the game to keep everyone mentally and emotionally focused on a goal,” Graham said. “I can’t recall a practice in which David didn’t bring emotion, and players and coaches can feed off that and use it to play better and enjoy practices and games.”

That same passion drives him, even when he is at home with his family.

“Right now, it’s raining, and we just want to get out and do something,” Kenneth said. “That’s how I always been when I was young myself. Always herding sheep, riding horses, riding my bike, fishing. Always out there along the river by Shiprock, at the San Juan River.”

Kenneth said that he always tries to keep his kids active, keep them together, and teach them good values. All the while, they did activities like play sports, go into the woods or go to rodeos.

“We always try to go fishing or hunting, always trying to get outside,” David said. “To be honest, it’s just being able to go out there and having fun. I just grew up doing it, just something I picked up. I just love it.”

Another sport that David is very passionate about is wrestling.

“I love wrestling. Wrestling is my favorite sport,” David said. “I’m a better athlete in football; football is where it’ll take me somewhere like college, but wrestling is my favorite, it’s fun … Usually because the guys, my teammates, we always practice with each other, because we are all trying to get better with each other, always working and we go through a lot, the workouts are really tough.”

“His dad used to say that all the time about him, that he was very unique,” Guridi said. “I didn’t realize that until he got on the mat. I wrestled with him and teaching him, just to see how quickly he caught the moves. And before you know it, I teach him a move one day, and the next he’s using that move.”

Besides his skills, what the coaches also noticed was his excellent attitude.

“He’s a great kid, funny, very respectful, a go-getter, always on the grind, always up to something, always keeping himself busy,” Guridi said. “If he’s not busy playing sports, then he’s fishing. If not fishing, then he’s hunting. He’s always preoccupied with something, a smart kid.”

David’s brother, Kenneth “Kenny” Descheene, and his sister, Sarah Descheene, are both students at St. Thomas University, and David hopes to join them there next year. Kenny, a graduate student, is a football player for the university, while Sarah, a sophomore, plays for the softball team. This year, Sarah was voted homecoming queen and, according to her mother, blew all the other girls away.

The three siblings have done everything together, from hunting in the woods to cowboying in the Everglades. Kenneth still remembers the days he would take his kids to a rodeo and how Kenny would sit with him in the front of the truck while David and Sarah wrestled in the back. They would always tire each other out, and Kenneth would have to carry all his kids to bed.

In Hollywood Hills, the three siblings play in a diverse community filled with different people from different cultures. Although there are other tribes in Florida, they are the only Navajos in the area.

“Our dad tells us where we come from, who we are and who our people are,” David said. “I’m all the way down here in Florida, and my tribe, my people, are far away from me, so I’ve always been a black sheep in crowds.”

David has visited New Mexico a few times, but that was when he was really young. He plans to definitely visit again in the future.

David’s accomplishments have come as no surprise to either his football or wrestling/baseball coach, but the current COVID-19 pandemic has caused everyone trouble.

David’s first football game was delayed until the day before Halloween. However, not long after that game, one of the opponents on the other team tested positive and forced both teams to shut down. Last week was the first time David practiced with the team, but not everyone showed up, and they don’t know when or if they will have any games for the 2020 season.

“I’m not too happy,” David admitted. “It’s my last year, and I wish we had a few more games to play, but we just got to do our best with what we got, and it’s really about safety more than anything,”

David is hopeful that the wrestling team will have a season, but both coaches and school officials are still trying to organize the students to provide a safe way to practice and compete.

Regardless, David is still hopeful of playing at the next level, regardless of the sport. He has already received invites from colleges and hopes to study biology since he loves being outside and wants to learn about the environment more. His coaches know that he can go far.

“David can play anywhere and choose any sport he would like with the mindset he brings to competition,” Graham said. “As the old saying goes, ‘The greatest ability is coachability,’ and David has that times 100.

“You can’t force a player to love practice. You can’t make someone love the 4th quarter of a game in which they know they’re already tired and will have to take on 2 people bigger than they are. You also can’t force someone to step outside their comfort zone and sacrifice personal achievements for team success, but David does all those things on an everyday basis.”

Coach Guridi has trained David for three years and always saw potential in him.

“I was really happy that he was a part of my program,” Guridi said. “Great wrestler, great football player, he was also a part of my baseball team too, he was a good baseball player too. I really wish that I would have been there for his senior year.”

“I know I can play football at the next level; I feel like I can. I just need to get stronger and the same for wrestling,” David said. “I’m not the most athletic guy, but I always try to be the smartest guy on the field or the mat.”