LisaMarie Begay’s performance this softball season earned her much more than playing time.

The freshman out of Shiprock High School began the fall as a walk-on for Lamar Community College (Colorado), but her strong play during the spring resulted in a scholarship offer.

“She actually did amazing for us,” Lamar head softball coach Kristen Silva said. “She came in clutch a lot more than we ever thought she would. I was surprised.

“She was a leader by example for us,” the coach said. “She’s very quiet, never said too much. She did everything correctly.”

Begay received the walk-on opportunity after emailing Silva about the Lamar program. She won the starting spot at second base, though she also played first base. “I just started practicing harder,” she said about the earned playing time.

Batting in the middle third of the order, she finished the season hitting .300 in playing 33 of the 46 games. She missed eight games during March because of an ankle sprain suffered from an awkward step on home plate, according to the coach. 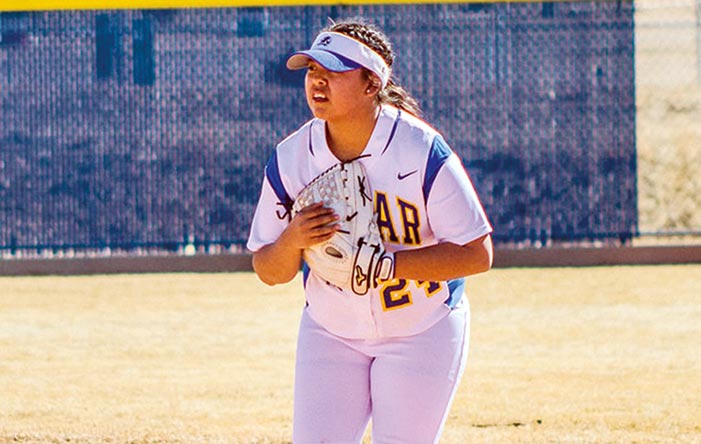 Submitted
LisaMarie Begay, a former Shiprock High graduate, earned a scholarship on the Lamar Community College softball team after starting the fall as a walk-on.

Among the freshmen, her 90 at-bats ranked second, yet she was first with 29 runs batted in and shared the lead with two home runs.

Her approach at the plate was simple. By not trying to do too much, she remained disciplined and made contact. She struck out only four times.

“I just had to be confident in myself, go up to get a hit and get on base,” said Begay, who walked 11 times and stole four bases without being thrown out. “Hit a pitch I like and stay in my strike zone.”

She had seven multi-hit efforts, including a season-best three hits in four at-bats during a win over Trinidad State. She hit a grand slam —her first ever, she said — to center field.

“I was seeing the ball,” she said. “I didn’t think I would hit a home run that day. It was the pitch I was looking for. It was in the perfect location, right down the middle.”

In addition, she doubled and singled to drive in her season high of seven runs, which led Lamar in that game.

The higher level of pitching didn’t discourage her, either. “I told myself to keep cool and not think about it,” she said.

Defensively, Begay’s 86 chances led the freshmen, with her .942 fielding percentage the best among the freshmen with nearly that many chances. In two games she had a season-high seven chances and handled all of them. Her five errors were in three wins, for twice she committed two.

“She stepped up for us. She made a lot of good plays,” Silva said. “She’s really solid there.”