St. Michael gives much larger Page a home run for its money

Considering they’re from different divisions (St. Michael 1A and Page from 3A), the teams played a good softball game last Thursday in the match’s first round, with Page besting much smaller St. Michael by just one point, 5-4. 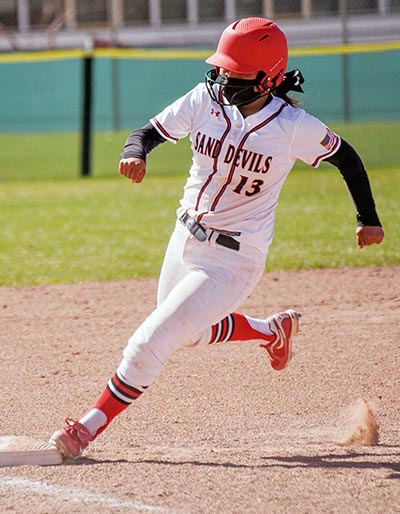 Special to the Times | Krista Allen
Page sophomore catcher Calena Miller (13) rounds third base in the second of two games against the St. Michael Cardinals on Apr. 1. The Sand Devils won Thursday’s games by a score of 5-4 in the first and 13-3 in the second.

The second game of the doubleheader wasn’t as close, with Page winning 13-3.

In the first inning of the first game, sophomore Grace Jump pitched for Page while Autumn Shirley batted first for St. Michael. Shirley was able to walk to first but then began to show great speed as, during the following two bats, she stole second and third base before finally making it home and scoring the first point for the Cardinals.

No runs were made during the second inning, leaving the score 1-0 in favor of St. Michael.

In the third, Shirley hit a single then stole second before the next pitch. Shirley made a dash for third when Maya Ross hit a high fly ball into centerfield. The ball was caught and thrown to third base forcing Shirley to slide safe into third. Santana Dalgai hit a single. She was on first base when Gabriella Simpson batted and hit a home run for the Cardinals. All three girls ran home, bringing St. Michael’s score to 4-0.

Feeling the pressure, the Sand Devils became more daring. Freshman Kylee Sam hit a single, but when the ball was fumbled by the defense, she sprinted to second. She then stole third base. At the next at-bat, Sam made it back to home plate and was the first to score for Page, trimming the lead to 4-1.

The Sand Devils brought in a new pitcher, Victoria Clark, whose fastballs struck out the first three Cardinals. St. Michael worked on its defense at the bottom of the fourth, tagging out the first two of Page’s lineup, but sophomore Tessa Cummings broke through. She made it to first, stole second before making a run for home after sophomore Calena Miller hit deep into left field, allowing her to make it to second. At the bottom of the fourth, St. Michael was ahead 4-2.

No runs were made in the fifth and sixth inning thanks to solid defense on both sides.

In the last inning of the game, Page made one last effort to pull out a win. Miller hit deep left and ran for first. The following two batters were tagged out, but they allowed Miller to make it to third. Then Sam hit the ball deep into left field, allowing her to run all the way to third. She hesitated but stopped there rather than risk getting tagged out. Miller, meanwhile, made it home and scored as Page pulled within 4-3.

Next bat, the pitcher overthrew the catcher, the ball hit the fence, and rolled away from home plate. While the catcher was turned, Sam made a mad dash for home. The catcher quickly recovered, but it was too late as Sam made it home, tying the game at 4-4.

St. Michael drove to get home in an extra inning, but Page put all their energy into defense. St. Michael hit the speedballs, but the coordinated Sand Devils caught three of the batted balls when the game moved to the bottom of the eighth.

The first Page batter was tagged out at first, but then the Sand Devils made steady progress and got the bases loaded. It wasn’t until the ball was overthrown at home that Victoria Clark on third made the decision and ran for home. She slid and stole home plate, breaking the tie and effectively ending the game, 5-4.

It was a close game, but St. Michael coach Karen Tom felt like it displayed her team’s skillset.

“(Our season ) is going very well,” Tom said. ‘We had some very good games. We were in a tied situation against Joseph City as well, and we lost the tie with them. We’re definitely playing some really good teams and putting up some good competition.

“I think that we are still on the road to state, and we are still working out the kinks, so we’re going to get better and come out on top.”

Sophomore Gabriella Simpson said she was proud of her team and what they came close to accomplishing.

“I think the first game we were very strong and then as a team we were very hyped to play, but later in the day we just got tired and made a lot of errors,” Simpson said. “Santana Delgai made the home run and just hyped the whole game, that was very cool, and Smith in the second game did a double, hit the ball, and put on two runs for us on the run. But we all did good today.”

Page, in turn, acknowledged it was a challenging game, but they persevered and were able to get a victory, said Page coach Sunni Crank.

“I would say we started off slow and a little timid, but once we got into our groove, I think we opened it up, and we’ve kind of started playing to our potential,” Crank said. “We definitely played until the last out or the last hit, we didn’t give up, and we came together as a team.”

Calena Miller, a sophomore for Page High School, thought it was a good game.

“The first game, we did pretty good. We battled through it …,” Miller said. “All of us did our job for the team, we did pretty good, and we battled, then won by one. We had a lot of energy, we were excited but nervous for the game, but we were prepared.”