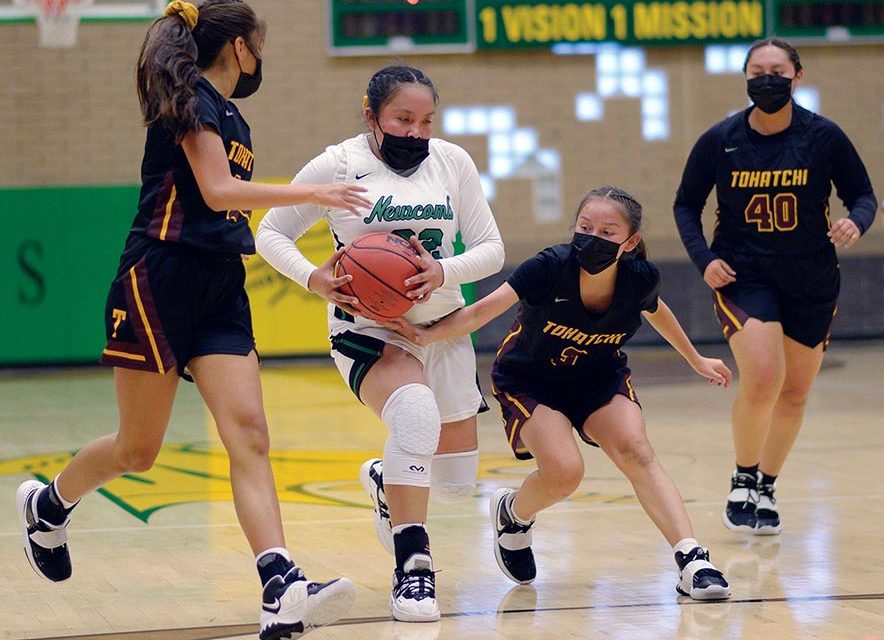 It took nearly three quarters for the Tohatchi girls’ basketball team to finally shake off the Newcomb Lady Skyhawks.

“Obviously, we didn’t play as well as I would have liked,” Tohatchi coach Tanisha Bitsoi said of their latest district win. “I felt like we weren’t as focused because we performed much better the other night with Thoreau.”

Bitsoi said there are a few things they need to fix as they prepare for Friday night’s showdown with Navajo Prep in a rematch of last year’s New Mexico Class 3A championship game.

“We need to polish some things up mentally and, of course, we’re still working on the conditioning part,” she said.

With Navajo Prep winning state last year, Bitsoi said the Lady Eagles are the team to beat in District 1-3A, which also consists of Crownpoint, Newcomb, Thoreau and Zuni.

“They return some core players back,” she said of the Eagles.

Nonetheless, she feels that her team can still compete at the highest level.

“We were the runner-ups last year and I believe in our group,” she said. “I believe in these young ladies and we’ll see how things go on Friday night.”

Against Newcomb, the Cougars got 19 points from freshman Brooke Badonie and 14 markers from senior post Montana Soto.

Soto made her presence known in the second and third quarters as she converted six baskets from close range while Badonie scorched Newcomb with nine points during their pivotal run.

“She had a rough start,” Bitsoi said of her shooting guard. “She got charley-horsed, but I felt like we just struggled tonight. It’s going to happen throughout this shortened season and we’ll just have to correct those things.”

Of the two squads, Newcomb coach Bill McLaughlin said the Cougars were the more seasoned team.

“We’re playing with some young players,” he said. “I played an eighth-grader an awful lot, I played a couple freshmen an awful lot and not being able to play this summer and get these kids experience playing against the likes of Tohatchi is really hurting us mentally right now.”

The Newcomb coach said they’re not in the greatest shape and that showed late in the game as Newcomb went 1-for-12 from the field while committing four turnovers in those final seven minutes.

“When you’re not in shape you make mistakes,” he said. “I think towards the end of the game we made some mistakes that if we were in better shape we may not have made.

“But hats off to Tohatchi,” he added. “They stepped up at crucial times and they got some takeaways and they got some really easy breaks. Their kids got out on the floor really well and I was really impressed with their two big girls; they gave us some fits.”

And when Tohatchi went inside, McLaughlin said they had to be mindful of the Cougars’ outside shooters.

“They can shoot the ball so you always have to respect that,” he said. “You know they’re a veteran team. We just have to get better but I was very pleased with where we started and where we’re at right now.”

The Skyhawks were paced by seniors Hannah Begay and Zoey Natonabah as they combined for 30 points with Begay scoring 16.

In addition to those two players, the Skyhawks returned two other lettermen in Ryeshiandall Jim and Deyovionanna Johnhat

“The rest of them are fairly new to varsity,” McLaughlin said. “We graduated three seniors that really scored a lot for us so we’re having to find people to step in and fill those roles.”

Both teams were in action last night with Tohatchi hosting Gallup while Newcomb traveled to Crownpoint. Results for both contests were not available at press time.