Lady Cougars get going in 2nd half 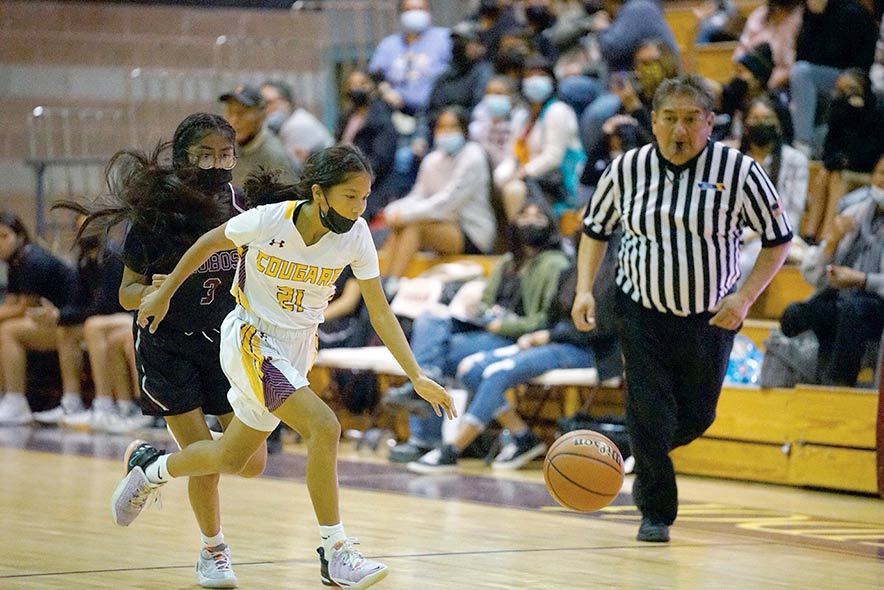 Navajo Times | Quentin Jodie
Rock Point’s Tayleen Woody (21) dribbles the ball down court against the Many Farms Lady Lobos on Monday. Rock Point improved its record to 3-0 with a 70-32 win.

Rock Point girls basketball coach Andrew Reed wasn’t too keen on having his girls being pushed around, especially in their home gym.

After leading 28-24 at the half, the Lady Cougars played with more aggression and that led to a 70-32 win over Many Farms on Monday night.

“They played us physical, so I told my girls, ‘Let’s play physical too,’” Reed said. “Once we did that it opened things up for us.”

In addition to playing with more passion, Reed wanted his team to slow things down as they had a few opportunities go awry in the opening half.

“We had to calm down a little bit and be patient,” he said.

The Lady Lobos went toe-to-toe with Rock Point as the game was knotted at 12 apiece after one quarter of play.

In the second, Many Farms stayed within striking distance trailing by four at the half with Zoey Juan putting in five of her team-best seven points.

The defending 1A state champs, however, exploded 44 points in the second half while holding Many Farms to eight points.

The Cougars were led by senior Arianna Begay as the 6-foot-1 guard/wing finished with a game-high 25 points, which included 16 points in the second half.

“We’re going to take it one game at a time,” Reed said. “I have eight girls that came back, so they know what it take to play tough teams.”

The top returners for the Rock Point team are all seniors and they included Rainee Bahe, Sasha Chee, Tiffany Tallboy and June Yazzie and Arianna Begay.

“I’m very fortunate to have a team like this,” Reed said. “I picked up these girls when they were freshmen and I felt like they could carry this team when they got to their junior and senior year.”

With a seasoned team, Begay said they’re looking to win another state title.

“We have a lot of expectations,” she said. “We just got to keep improving. Hopefully, I can end my season with another ring.”

The Cougars (3-0) played its fourth game last night against Seligman. Results for that contest were not available at press time.

Rock Point will host Grand Canyon on Tuesday before they’ll play in the Round Valley basketball tournament Dec. 10-12.

“We’re excited,” Reed said. “We’ve never been there before and I was really surprised when the AD told us we’re going down to the Round Valley tournament.

“There is going to be bigger schools there,” he added. “That will let us know where we’re at and what we need to improve on.”

Reed said his club is not close to where they need to be.

“We still need work with our skills and conditioning,” he said. “Our season got started early with some of my girls coming off the volleyball team.

“I’ve had a week with them, and then we had the flu going around so I have some kids out,” he added. “I was out for 10 day too, so we haven’t had a real solid practice yet.”