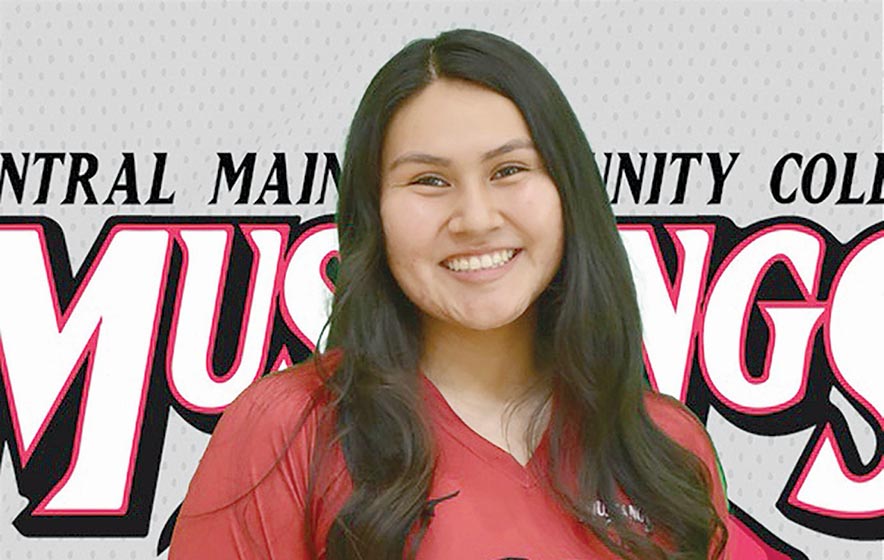 She received plaques for the conference awards and a certificate for the All-America honor. “It was so much fun,” she said about the season.

Smith added that the Player of the Year award was most special. “It was kind of like a surprise, right before our conference championship,” she said.

The 5-foot-10 left-hander said she performed better than she expected, though she certainly was prepared for the season. During the summer she competed in coed and women’s adult tournaments and in nightly open gyms, the latter of which meant two and one-half to three hours of play.

The tournaments were in the day or at night. “I played with adults who were a lot smarter and with a higher net,” she said. “It helped my vertical.”

She said she opened the season as a setter and a captain, then halfway through was a co-captain with Tiara Begishe, a Monument Valley product and All-America honorable mention choice.

She said Begishe’s presence helped her performance. “We had a really good connection,” she said.

Smith moved to playing all rotations when the team adopted a 6-2 formation, “something she had never done and did really well,” Central Maine head coach Kyle Chapman said.

Among three to lead the team by playing in 64 of the 65 sets, she ranked fourth in the conference with 156 kills, fourth with 0.94 service aces per set and fifth with 3.42 assists per set.

“She played very, very well,” the coach said. “She is a very good all-around player. She has a really high level of volleyball IQ.”

His instruction about proper technique made a difference.

Smith adjusted her footwork for setting by getting her feet squared. For hitting, she moved from a three-step approach to four steps, which “gave more momentum,” she said. “I was getting there faster. It helped with my arm swing so that I can get up higher.”

She had six double-doubles, including for kills and digs in three of the final five matches. She had 12 assists and a season-high 12 aces in a September win.

Her lone triple-double — 22 assists, 17 digs and 13 kills — came during a 3-2 loss to Paul Smith’s College, when she led the team in assists and kills.

“It was a strong, smart game,” she said. “I feel like we really communicated well.”

Smith contributed at least 11 kills in six of the final nine matches, when her role was more hitter than setter. Her season highs of 23 kills and 23 digs came in the finale, when the team lost in the U.S. Collegiate Athletic Association Division II National Championship.