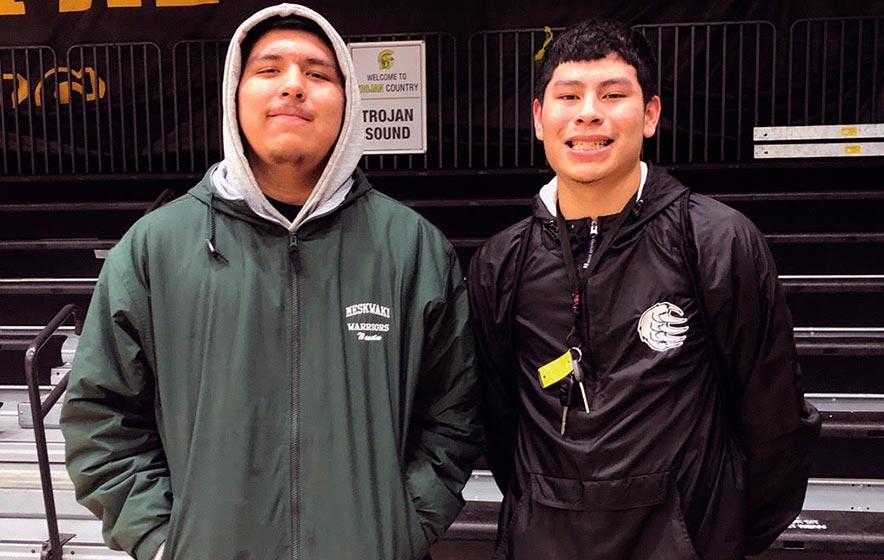 Submitted
Tierran Wanatee (left) and Evan Nelson play for the Meskwaki Warrior boys’ basketball team. On Tuesday, the Warriors won a playoff game and will play for the Sub-State Finals, one step away from the state tournament.

The Meskwaki Settlement School is a high school in the Meskwaki Nation, the only federal recognized tribe in Iowa. Last night, the Meskwaki Warrior boys’ basketball team won at the playoff games for the first time in years and now they’re preparing for the Sub-State Finals, one step away from State.

On the team are two seniors who are part Meskwaki and part Navajo: Tiernan Wanatee and Evan Nelson. Last night Wanatee made his relatives in Ganado proud while Nelson did likewise for his family in Window Rock.

“Just bonding with my teammates, creating that brotherhood, meeting new people, playing together and having different opportunities,” Wanatee said.
“Basketball is like an art, you got to work on it every day, you just got to perfect the craft,” Nelson said. “I like the high-paced action and the team effort; it takes all five people to win the game.”

This past year the Meskwaki Warriors were made Iowa Star South Conference Champions; now they’re aiming higher as they make a bid for state champions, their first obstacle being the playoffs.

The playoff game was Tuesday evening between the Warriors and the Grundy Center Spartans. The Spartans were bigger and taller than the nimbler Warriors, something that Coach Garrett Bear said they had planned on.

“It was their size: They were a big team, there were some big kids. We tried to crash them, speed it up, get them tired and we accomplished it,” Bear said. “They looked pretty tired, but we were too. It really worked in keeping up the pressure and then after that falling back and switching out the players so they can rest.”

From the start, the Meskwaki Warriors put on a strong offense, making rapid scores in the opening match. By the end of the first quarter, it was 15 to 7.

The Warriors had a collective mind that night, easily passing the ball from player to player, outmaneuvering the Spartans and making a variety of 2-point and 3-point shots. The Spartans never found their rhythm as they struggled to keep up.

Warriors’ Bishop Chavez led the score while his teammates switched to defense, blocking the Spartans and causing many turnovers. By the end of the first half, it was 29 to 19 Warriors. Only two last-minute three-pointers saved the Spartans from being overwhelmed.

When the third quarter began however, the Spartans found some footing. Using their strength and size, they forced their way through the Warriors’ defense, taking half-court shots though only succeeding in passing the ball to their teammates.

Wanatee was the only Warrior who could take the Spartans’ shoves and remain standing. He would also score the Warriors’ first points at the start of the second half.

“My greatest asset is being strong and physical,” Wanatee said. “Knowing how to handle guys bigger than me, taking on that responsibility of guarding them and trying to lock them down.”

The Warriors kept a steady lead through the rest of the game, making it their goal to match the Spartans for every shot they took. At the beginning the Warriors had a 15-point lead, by the fourth quarter that lead shrunk to 9-points.

“Just coming right back,” Wanatee said. “If they hit a three then we would hit a three back; when they score, we would score. I feel it was that back-and-forth play that really made the difference.”

In the final seconds of the game, the Spartans’ ball was switched to the Warriors and passed to Nelson who ran up the court, swerving to miss the defenders and make the final 2-pointer score of the game.

“I make it my goal to bring the energy to the team,” Nelson said. “And my strengths are shooting from the outside and driving the ball into the basket.”

The final count was 64 to 54. It was a long time coming for the Warriors. They always made it to the playoffs, but this is the first time in almost five years they get to advance forward.

“Tonight, I like our intensity, our enthusiasm I like how we fought for all four quarters and if we take that and clean up our mistakes then I have all the confidence in the world that we should win the next game,” Bear said.

The Meskwaki Warriors are now the District 10 Champions, the best in their region. Their next opponent is North Linn this Saturday. The winner will get the honor of going on to state.

“It was a pretty tight game. They really put the pressure on us, them bringing the ball up, making the shots the way they did, but we persevered through it,” Wanatee said. “It feels great, we’re one of the best teams in our school’s history and being a part of that is what makes it special for me.”

Nelson felt likewise as the team traveled back home after the game, the bus still filled with excitement from the game.

“The thing that stood out is that we showed that we’re one of the best teams, and we deserved to be there, and we just proved that we can do this,” he said.