Returning talent may give Ganado an edge

With four key players returning, Ganado girls’ basketball coach Mike Bitsuie could have a special group on his hands.

Those returnees are veterans in Bitsuie’s system with seniors Jayla McIntosh and Michelene Coleman having played for their coach the past three seasons while senior Deana Curley and junior Abigail Benally have played for the last two. 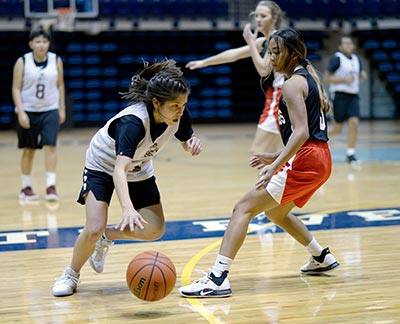 Ganado Lady Hornet Abigail Benally, left, drives the ball against a Mogollon Lady Mustang on Thursday in Fort Defiance during a scrimmage.

“I have a very experienced lineup,” Bitsuie said, while adding that juniors Jaedin James and Kelly Smith came off the bench and logged in key minutes. “This team is very tight and I like our chemistry.

“Our first six players have been through the battles so they know what to expect,” he said. “They are coming off a good summer. They worked really hard in the weight room so I’m excited about the upcoming season.”

With what he has Bitsuie said they have the capabilities of making a really good showing this year.

“I hope to make a long state tournament run,” he said. “We just need to continue working with one another. We need to support and encourage each other and work as a unit and not as individuals.”

With their vast experience, Bitsuie said he doesn’t have to reteach his concepts.

“They already know what to do on offense and defense,” he said. “And they know how to use each other. We just need to translate that to our second group that is moving up from the JV and freshmen teams last year.”

Even with some high expectations, Bitsuie said they’ll have their work cut out for them in the 3A North Region, which starts on Jan. 7 when they host Monument Valley.

“The girls already know what to expect,” he said of the conference race. “None of them are going to be surprised about the competition. They went through it last year. They know that on any given night any team can be beat.”

Bitsuie said it’s hard to predict how the final standings would wrap up since most of the 3A North teams also return some key players.

“Every team in our conference has different aspects you like about them,” he said. “Page was obviously a little bit better than everybody else last year and they played some really good defense. I expect them to be just as tough.”

Bitsuie said Window Rock, Chinle, Tuba City have some experienced players coming back so should be really good.

“Window Rock has one of the best players in the state,” Bitsuie said of senior post Jana Solee.

As for Chinle, the Lady Wildcats are looking to use a pair of post players to their advantage in senior Tea Murray and sophomore Aisha Ashley.

“They are going to be trees down there,” he said of Chinle.

Of all the teams in the conference, Bitsuie said the Tuba City Lady Warriors return all but two seniors that graduated off last year’s team.

“Tuba is going to be quick and they can shoot,” he said. “They have Jayda (Chee) in the middle so they’re going to be tough to beat.”

As for the final team in the conference, Bitsuie said there is no one that stands out on the Monument Valley team but collectively they are going to be hard to beat.

“MV has some good coaching so they’ll just reload,” he said.

Bitsuie said it’s going to be interesting how the conference plays out but if they take care of business on their end they should contend for the regular season title.

“I feel like it’s going to be a wide open race,” he said. “But if we can play our game, play our defensive schemes and play tough we should be right there.”