An appearance in the finals of the six-man state bracket seemed to be out of reach for the Ramah football team. 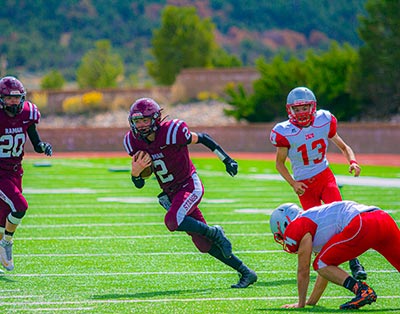 “This was very stressful for the coaches,” said Ramah coach Shane Evans, whose team improved to 8-1 overall. “It was great because it was the No. 2 and No. 3 teams playing. It was a tough game, and for a state semifinal it should be like that.”

“It’s great to have this opportunity to go play for it,” he said. “I don’t know if people understand how special it is and how hard it is to even get to this point. The best teams always don’t get here and you see that year in and year out.

“You can lose in a quarterfinal or a semifinal game, and you may not get the opportunity to play for it,” he added. “For us to get there is huge and the boys are just excited.”

In last Friday’s semis, Evans said both clubs made some mistakes and both clubs had a lot of positives.

“The best positive was that we came away with the win,” he said.

Despite trailing by three points late in the contest, Evans never doubted his kids. In the teams’ huddle, the Ramah coaching staff reminded them about all the work and sacrifices they put into this season.

“We talked to the boys and we basically told them that we have a lot of confidence in them,” he said. “They made some big plays and everybody just did their jobs.”

The first big play, Evans said, came when Ramah ran a running back screen for senior running back Whelan Clawson for a 30-yard gain to set them up at the Panther’s 1-yard line.

On the next play though, the Mustangs were assessed a 15-yard penalty. Nonetheless, they were able to punch in a score with Clawson getting into the end zone.

On the Panther’s ensuing series, Ramah started them out on the 5-yard line and they sacked the quarterback at the 1-yard line.

“We just had a solid four-and-out,” he said. “We got the back and we scored again.”

On that final TD, Mustang quarterback McKay Evans made a last-minute change to take Animas middle linebacker Chilly Hernandez out of the equation for Clawson to score.

“He’s a tough kid,” the Ramah coach said of Hernandez. “He shifted over into that 2-hole and McKay swiped our plays and it worked out and we got Chilly out of the play, and Whelan was able to score.

“That was huge from McKay,” Evans added. “He calmed down in that moment, he made an audible change for the offensive line and then we executed.”

In the last two minutes, the Panthers went on one last scoring drive and with three seconds they punched in a TD to make the final score 35-30.

“I’m just proud of the boys, and I’m proud that they stepped up,” Evans said. “I was happy that it was a tough game because, you know, how are you going to react when you’re in that type of situation and these boys in my opinion they stepped up to the plate and that’s what it’s all about.”

The pairing for Saturday’s state title game will feature a second meeting between the two schools. Earlier this year, Gateway Christian beat the Mustangs by a 49-34 count.

In its last meeting, the Mustangs had a slow start. The Ramah coach is hoping they can build some momentum early.

“That’s the game plan and I am hoping that we can do that,” he said. “The last time we played them McKay was coming off an injury and he didn’t play any defense.

“He’s one our leading tacklers and he didn’t play defense in that game,” the Ramah coach said. “Now, we’ll have him both ways and that will be a big help.”

Evans said his team just need to play with confidence to avenged its only lost of the season.

“We have to go down there with confidence,” he said. “That’s going to be the difference but having played them early the boys feel like they can beat them.

“They can win and it’s a matter off them calming down, being confident and just go at them from the get-go and get a good start,” he said.