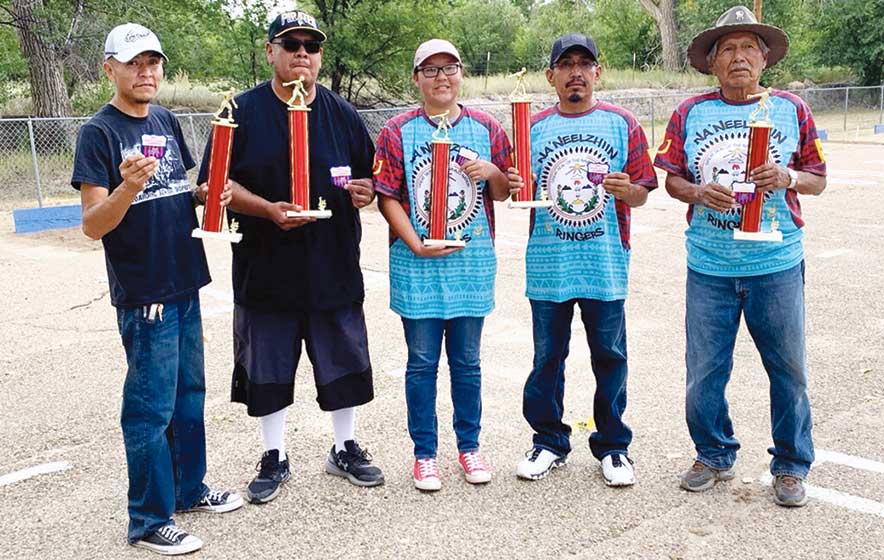 On Saturday, 10 members of the Na’Neelzhiin Ringers, a New Mexico based horseshoe pitching club, qualified for the 2021 New Mexico State Horseshoe Pitching Tournament.

Seven of the 10 won awards with some becoming state champions.

Tommy Antone, a longtime horseshoe pitcher and one of the founding members of the group, won the elders’ state championship.

And Bryon Rico is state champion for the E class, Seymour Nez is state camp for C class and Enos Woody won the B class.

The state competition was held in Springer, New Mexico, on Saturday. It was a nice cool day as the competitors played next to a flowing creek, giving them a peaceful and beautiful environment.

Stacey Trujillo, Kalie’s father, was 2020 champion for the B class division. This year he improved his accuracy and moved on to the A class.

He competed against more experienced pitchers and was amazed that he placed third.

One of the competitors he faced won the Class A championship 17 times. But he lost the match against Stacey Trujillo.

“That was the highlight of the tournament for me,” Trujillo said. “I was able to beat a then 17-time state champ.”

He said it was an enjoyable experience overall, meeting people from across the state and competing against one another in the outdoors.

Tommy Antone was happy with the team’s performance. His own competition in the elder’s division was challenging, but he was able to come out on top and win gold.

“It feels great,” he said. “It was a good competition. I feel good about it and it just came out good overall.

“I really appreciate these guys that came with us,” he said. “Some people couldn’t make it, but these 10 did really good. I’m really proud of them, especially when they got their trophies.”

The Na’Neelzhiin Ringers encourage people to come out and play by joining the National Horseshoe Pitching Association so that they can compete in tournaments and championships as well.

Trujillo said that it’s always fun to have new people come out and compete against them.