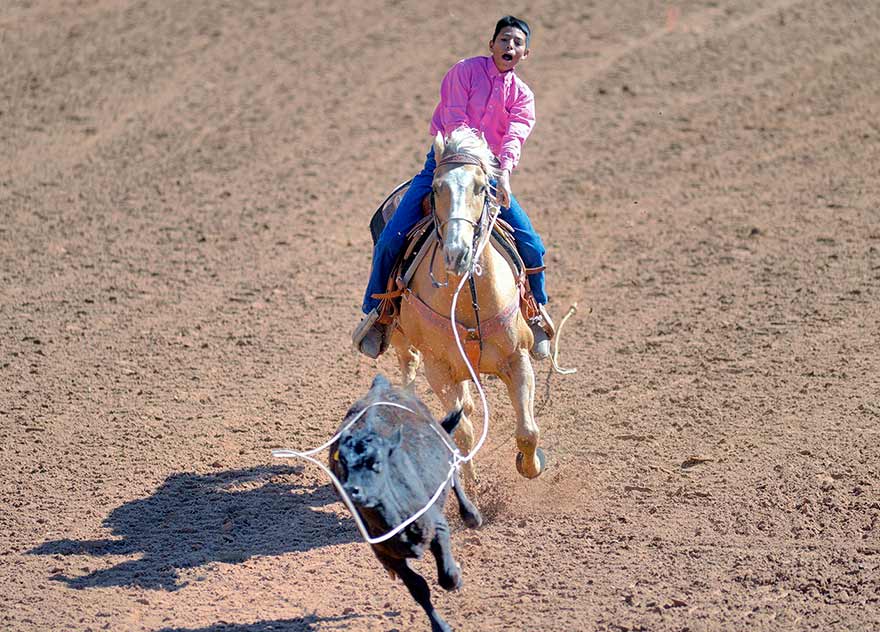 He missed on his first loop during the short round of the New Mexico Junior High Rodeo Association state finals on Sunday. But with a second loop, Tsosie made sure he caught his calf to stay in the running for a state title.

Learning that he shared the state title with Cooper Wood as both cowboys finished with 63 points, Tsosie said, “I have a lot of butterflies right now but I’m happy that I won.”

With his first-place finish in the year-end standings, Tsosie will be making his first trip to nationals, which is scheduled June 23-29 in Heron, South Dakota.

The recent Crownpoint eighth-grader said he was pleased with how things turned out after missing nationals last year as he finished fifth in the year-end standings.

His dad, Tyrone Tsosie, was happy that his son had a strong finish at the state finals.

“I’m happy that he did this,” the older Tsosie said. “With what he did it makes me think about his grandpa on his mom side. He really helped us out by letting us use his cattle to start him on breakaway roping.”

Going into the state finals, Tylon was tied for third place in the year-end standings but with two solid runs he moved up one spot with 54 points and trailed event leader Sterlin Mitchell by two points.

Tylon roped his opening round draw in 3.83 seconds and in the second round he recorded a 3.53 run, placing third in each go round.

“I had two great calves that broke nice,” he said.

With one more round to go, Tylon admitted that the pressure got to him and as a result he missed on his first loop.

“I think I just rushed it too much,” the 14-year old cowboy said.

Nonetheless, his second loop saved him as he roped his draws in 19.20 seconds, which included a 10-second penalty for breaking the barrier. Looking back, Tylon said carrying a second loop is something he’s not accustomed to but he’s glad that he did.

“That is something we always argue about,” his dad said. “He doesn’t like to carry a second loop but I told him that he needed to.”