The fall season of the New Mexico High School Rodeo Association is shaping up to be great one for team ropers Calvin Taylor Jr. and Faron Candelaria Jr.

Through six rodeos, the two high school juniors have won half of those rodeos including a pair of first-place finishes over the weekend in Fort Sumner, New Mexico. 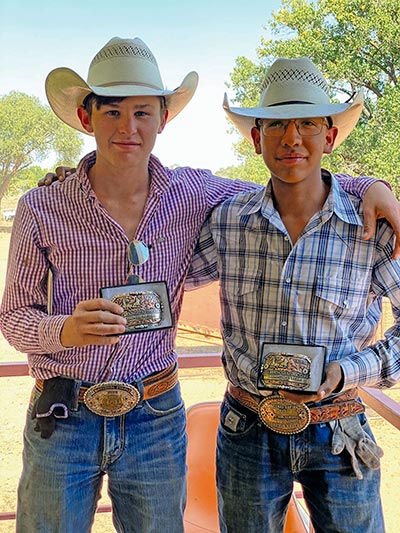 “We’ve been clean on every steer we’ve roped,” said Taylor, who hails from Canutillo, Texas. “We’re 6-for-6, which is almost unheard of in the high school rodeo.”

“We’re doing great,” Candelaria said, who is Diné, Isleta, San Felipe and Hispanic. “I’m excited to see how far we can go with this.”

Reaching the National High School Finals Rodeo is one of the undertakings they hope to attain – but there’s more.

“I would love to win state with Faron,” said Taylor, the team’s header. “It would mean the world to me because we’re such close friends. We both work hard at what we do and winning state would be a huge accomplishment for the both of us.

“We’re hoping to win state and go onto nationals and carry out a national title,” he added. “We’re set up for it because we have the horses and we have the abilities. All we have to do is use our heads.”

Admittedly, Taylor said he made the choice to head for Candelaria this season even though he’s rated higher on the heeling side.

That decision to switch sides has paid off handsomely for the Texas cowboy. Nevertheless, he credits Candelaria for the blissful season they’re having.

“There is a lot of opportunities when you rope with Faron, because he’s so talented,” he said. “We’re just a great team together because we’ve competed so much that we know the game. Roping comes pretty easy and natural for us.”

Candelaria agreed, while noting that they have found the right chemistry with each other.

“We’re just so good together,” he said. “We’re just staying on top of things and we’re basically in sync with one another.”

“The last few rodeos have been great,” Taylor added. “The first couple of rodeos we drew the strong end of the cattle and at this last rodeo we really drew some really good ones.”

On the next day the two teams challenged one another for the top spot with the Taylor/Candelaria team winning the round with a 5.8 run while the Hernandez/Montoya duo recorded a 6.2 effort.

“We had to be a 5.9 or better to win the average,” Candelaria said, while adding that the Hernandez/Montoya team pressed them to do better.

“They put some pressure on us but we knew that we could be just as fast,” Candelaria said.

“When our steer came I just did my job and when I turned it Faron crushed it,” Taylor said. “He was incredible and he did as good of a job as possible on that set up. We turned in the fastest time for the weekend and it was a pretty cool deal.”

With the win, the pair was awarded trophy buckles. More importantly, they picked up 20 points in the standings as they are unofficially tied with the Hernandez/Montoya duo for the top spot with 44 points each.

“I think it’s pretty cool that we get to compete with them,” Taylor said of the Hernandez/Montoya pair. “We’re all such close buddies and having them makes us better. We know that we have to rope to the best of our abilities because they’re great ropers too.”