Diverse Broncos off to rousing start 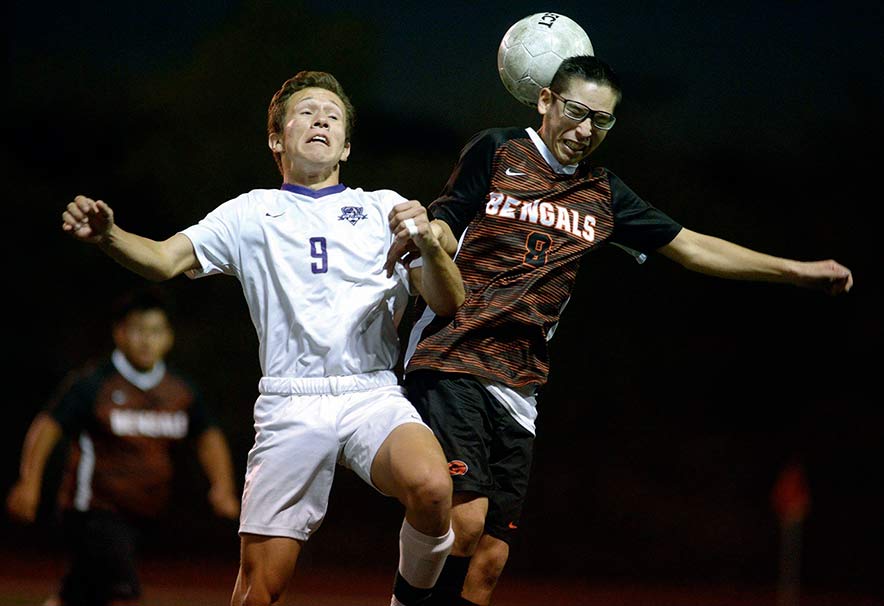 Navajo Times | Donovan Quintero
Gallup Bengal Luis Alvarez (8) and Kirtland Central Tristen Dobbs (9) leap into the air as they go after the ball on Thursday night in Gallup. KC improved to 12-2 overall and 2-0 in District 1-4A play with a 10-0 shutout win.

“I have a good mix of boys,” Kirtland Central coach Leonel Camacho said. “I have some Native American boys, I’ve got some Hispanic boys and I’ve got some Anglo boys. It’s great to see them all coming together and playing well.”

Camacho said his entire squad loves the game but there is a different element that makes it more special to coach this year’s team.

“This group right here embraces each other. They embrace each other first and then they embrace the game,” he said. “I want them to realize how valuable each single player is, even the ones that are our reserve players.

“They’re all so valuable,” he added. “I love the fact that we have this opportunity to model this diversity and unity at the same time. That is what I love about this team.”

With athleticism, speed and skills the Broncos are off to a rousing start to the 2019 season. Last week KC mercy-ruled Miyamura, Gallup and Bayfield (Colorado) to improve its record to 12-2 overall and 2-0 in District 1-4A play.

Camacho said most of his kids are multi-sport athletes and despite having other interests they invested a lot of time and effort during the offseason to better their soccer skills.

“They played offseason ball as much as they could knowing that there are a lot of good teams at state,” he said. “The kids have been working really hard. They realized that in order to compete at state they have to work hard and put in the extra time, and they have.”

With all the work and effort they put in, Villegas is hoping it’s going to pay dividends at the end of the season.

“We want to get to the (state) championship game,” the KC junior forward said. “That is what we want.”

Last year, KC missed the state playoffs with a 12-8 record but at the midway part of this season the Broncos are holding down the No. 9 spot in the latest playoff prediction algorithm according to MaxPreps.com.

The Class 4A state playoffs are set to have 12 teams with the top four seeds earning first-round byes.

“We were pretty good last year but we’ve improved a lot,” Villegas said.
With that said, he said they are looking to have great season.

Stemming on the number of goals scored, KC is doing just that. In 14 games, the Broncos have scored 82 goals with 62 of those scores being assisted.

Camacho said a lot of unselfish play is being displayed out on the field by his soccer team. He cited their recent Grants game on Sept. 12 when nine different players recorded a goal in their 10-0 shutout.

“These boys have learned that it’s better to have your teammates score and win the game rather than for you to score and lose,” he said.

In the 14 games played so far, Villegas leads the team with 25 goals scored while Joe and Manning follow closely with 19 and 14, respectively.

Of the 62 assists, Warner has a team-best 18, which is six more than Manning.
“Our teamwork has been real good this year,” Villegas said. “Coach wants us to play as a team and it’s really helped our game. We’re playing at our best right now.”

Camacho concurred and he credited the team’s balance for the numbers they have posted thus far this season.

“We’re playing well but as a team we want to be peaking when we get to state,” he said.

KC will close out the first half of district play at Bloomfield (7-4) today before hosting Aztec (2-10) on Tuesday. Camacho is expecting both clubs to be competitive.

“I don’t think Bloomfield was expecting that because they had a real good record at 6-3 going in,” Camacho said. “I’ve told them that it doesn’t matter who we play.  We have responsibilities for every single match and we have to do our jobs.”