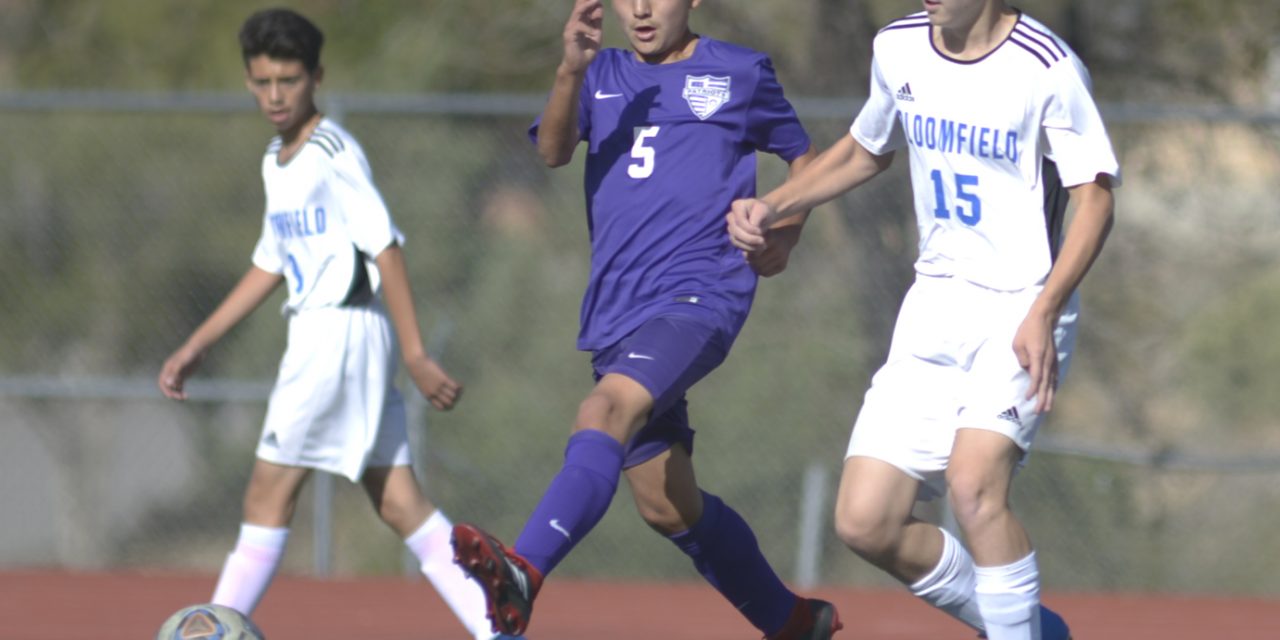 Navajo Times | Donovan Quintero Miyamura Patriot Mateo Juarez (5) and a Bloomfield Bobcat chase after the ball on Friday in Gallup.

The goal by Juarez was the only score made between the two district rivals as the Patriots won 1-0 in double overtime.

Miyamura improved its record to 4-9 overall and 1-0 in league play.

Freshman midfielder Ilias Gomez-Yantsiso assisted that game-winning shot as he crossed the ball near the 20-yard line and passed it to Juarez, who went one-on-one with Bloomfield goalkeeper John Michael Horton.

“When I got the ball I felt like my whole body was asleep but I was really scared,” Juarez said. “I saw that the keeper was out and I chipped it in over him. I didn’t think it was going in but then it went in.”

Thursday’s game-winning shot was Juarez’s fourth goal this season and he deduced that this goal was his biggest one yet.

“That kid is phenomenal,” Miyamura coach Russell Jamison said of his pupil. “That kid is somebody to watch and I’m real impressed with him.”

Going into Thursday’s contest, Jamison said he knew it was going to be a tight one but he didn’t expect it to go into double overtime.

“You can’t always look at stats but you can look at head-to-head against who they played and who we played so I knew it was going to be close,” he said.

Earlier this week the Patriots dropped a 10-0 decision to district leader Kirtland Central with Jamison citing mental lapses as the root of their downfall.

“That first half was abysmal but we turned it around in the second half,” he said. “As a result of what we learned in that second half we put it to use here today against Bloomfield.”

The Bobcats, who came into this game scoring four goals a game, had plenty of opportunities to score. In fact, they had an 18 to 5 advantage in shots on goal but they could not find the net.

“It’s tough and that’s soccer,” said Bloomfield coach Scott Reid of their missed opportunities. “If you don’t finish and you let the other team finish then sometimes you’re on the losing side. We had tons of chances but we just didn’t finish today.”

Reid, whose team dropped to 6-4 overall and a 0-1 mark in district play, said this loss was hard to swallow.

“This is one that we have to overcome down the line,” he said. “Kirtland beat Miyamura the other night and with the way the season started it’s going to be a battle with us, Kirtland and Aztec.

“We kind of dug a little bit of a hole but there is a lot of games left,” he added.

In other prep boys soccer action, Kirtland Central defeated Gallup by a 10-0 count to remain undefeated in District 1-4A play with a 2-0 record.

“The kids have been working really hard,” said KC coach Leonel Camacho, whose team improved to 11-2 overall. “They realized that in order to compete at state they have to work and put in the extra time and they have.

“In the offseason they worked in the summer by playing offseason ball as much as they can,” he added. “Hopefully it’ll be enough for us to perform at state.”