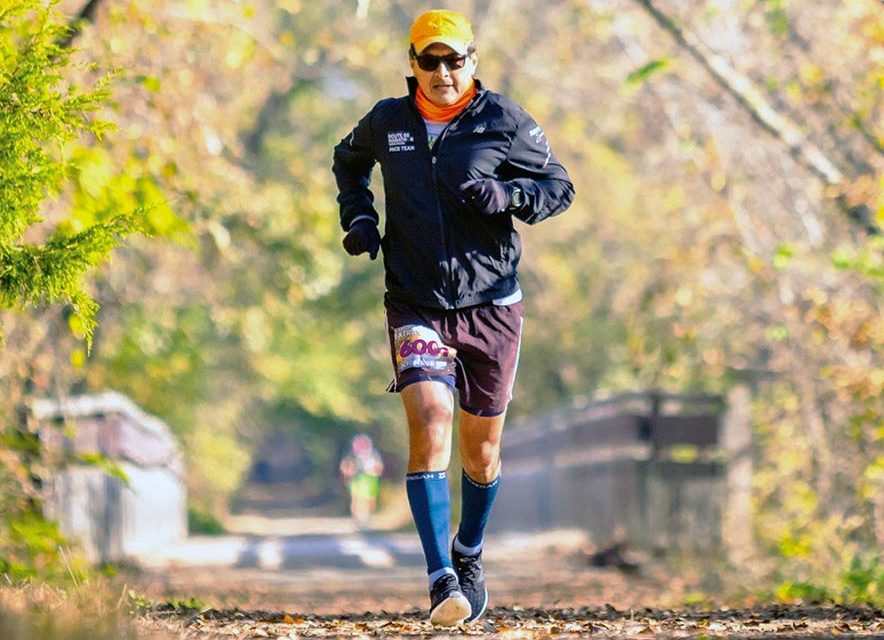 Submitted
Diné ultra runner Arnold Begay ran his first ultra-marathon in 2006. Since then he’s ran in multiple races from California to Alberta Canada. He recently represented the Navajo Nation during the 2021 Badwater 135 race in California.

Arnold Begay is an ultramarathoner who’s been running for as long as he could remember.

After a year in lockdown, he returns to running and representing the Navajo Nation in different races, his most recent being the 2021 Badwater 135 race.

Originally from Lukachukai, the 58-year-old grew up in the Nation living a traditional lifestyle. He herded sheep and played with other kids outside, running most of the time. He finished sixth grade at Lukachukai Boarding School when he moved to Oklahoma.

“That’s really the root of my ultra-running right now,” Begay said. “Anytime I’m out there I always think back to my younger days when I was outside and was told to go herd sheep and things like that.

“I always think back on it and that was really the root of my long distance running and I didn’t even know I could run this far, run a hundred miles, but I think it’s because of my roots back in my younger days”

He finished his education at Cleveland High where he played basketball for a bit before moving on to Oklahoma State University. He would later graduate with a degree in mechanical engineering.

He focused solely on getting his college degree, giving up sports so that he can focus on schoolwork.

Not long after leaving he started running in races – first taking part in 5K races, then 10K, and then half marathons before taking on full marathons. He still remembers the day when he did his first ultramarathon.

“I was really scared the first time in my first 100-mile run was in 2006,” he said. “On the internet there wasn’t a lot of info about running a 100-mile and I didn’t know anyone who ran that distance, so I had to rely on my instincts from my childhood.

“I just ran and did the Forrest Gump thing and just kept on running,”
he said. “But the feeling is just unreal to finish that distance the first time, it’s a memorable moment.”

Ever since then Begay has been running and it’s something that enjoyed. He said running took him to beautiful places in nature and allowed him to meet new friends along the way.

He can’t say for sure, but he is certain that he runs at least 2,000 to 3,000 miles a year. He has run in races from California all the way up to Alberta, Canada. Even when he isn’t taking part in a race, he would go for daily 3- to 4-mile runs.

He says his Navajo culture inspires and strengthens him to run, especially much of the cultural value that is tied to running.

“My dad was a medicine man and I’m set in those traditions and those songs they stick to me and when I’m running,” he said. “Especially when I hit a low spot, those songs, they help (and) give me strength to move on.

“That’s what I really depend on — those night songs and things like that. Because running ultra is a all-day and all-night thing.”

In his spare time when he isn’t working or running, he’s helping local athletes get recognize through social media.

He photographs athletes of different sports and then gives it to them for free, saying he hopes it will get the athlete more attention and a chance to continue playing.

Recently Begay stopped participating in marathons, saying there are way too many people participating, like the Boston Marathon where over 30,000 runners participate on average.

Begay would rather run in ultras where there are fewer people and where runners have more time to greet and befriend one another.

Another aspect he loves about ultramarathons it connects people. Sometimes, he says, he helps runners who are struggling to finish the race with encouragement or by sharing food and water with them. In turn, other runners would help Begay if he is having trouble as well. Now he has friends from across the country.

He said he hasn’t met another Navajo in the ultra runs, but he has met a few other natives, especially from around Oklahoma.

Begay doesn’t worry too much about eating right. He usually eats what he likes before a race and just runs.

However, he does take careful note of where he would be running, the weather, the terrain and the elevation. To him, the most important thing to remember is to stay hydrated, whether it’s hot or cold weather.

Begay’s running schedule over the year was interrupted by the coronavirus pandemic.

He isolated himself and ran on his own. The pandemic didn’t affect him too badly but he did miss the races. There were some virtual races available but it wasn’t the same.

This past year he took part in two races: a 100-mile run in Oklahoma and then the 2021 Badwater 135 race in Death Valley.

This was Begay’s third time at Badwater and it was tough with record high heat, strong 30-40 mph winds and rough terrain. He was one of a hundred participants who had experience ultrarunning and put his name down six months in advance.

Begay made it rough the first segment, but missed a cutoff time at mile 50.5 during the second segment, dropping him from the race.

Despite this though, it doesn’t matter to Begay as there are other races, he is planning to take part of in the fall. To him, winning isn’t everything.

One of Begay’s hopes is return home to the Navajo Nation and run across the reservation to promote a healthy lifestyle, especially for youngsters, many of who may not be active.

He ultimately wishes to start a running community in the Navajo Nation, a community where people can run together and encourage one another as through traditional values.

It isn’t just young people he is reaching out to; he also encourages older adults to get up and move as well, stating that you’re never too old to stop running. He is already planning for another ultra-race in the next few months.