In opening round of playoffs, Patriots deliver upset

For the most part, the top-seeded playoff teams in Class 4A baseball followed the script accordingly.

The home teams were the favorites to win the opening round series but there was one exception as the Miyamura Patriots upset No. 6 Santa Teresa.

The 11th seeded Patriots were beaten 13-2 in the first game, but they bounced back with 21-15 and 20-7 wins to topple the Desert Warriors. 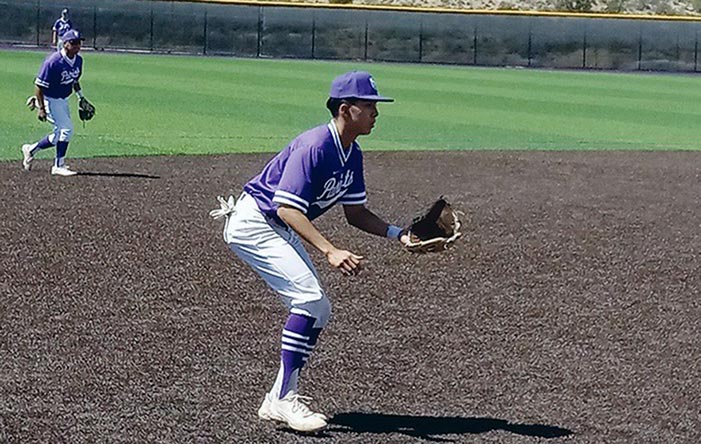 File photo
Miyamura third baseman Mathias Rodriguez readies his glove in an earlier game with Kirtland Central. The Patriots advanced into the second round after upsetting No. 6 seed Santa Teresa in the best of three game series.

“It comes down to depth,” Miyamura coach Emilio Griego said. “Everybody has a No. 1 pitcher and everybody has their favorite four players, but we have a whole team.”

The first-year Miyamura coach said the series benefitted his team as the Patriots utilized eight pitchers during the three-game series.

By his estimation, Griego said Santa Teresa used only four.

“They had to live and die with those four pitchers,” he said. “And our benefit was that if somebody struggled, we can go to somebody else. And they were kind of just stuck with what they had.”

Griego said everybody played a role in the come-from-behind series win.

In the third game, junior Jaimeer Beyale came up with two homers in the deciding game.

“He put that game out of reach for us because we were only up two, three runs when he hit his first one,” Griego said.

“We wanted to go down there and take care of business and give the fans another chance to see another baseball game,” he said.

The win over Santa Teresa, Beyale said, was a huge statement for the program, considering what they had lost to last year’s senior-heavy team.

“People counted us out,” he said. “The start of the season didn’t go too well but we got to state. This was a new team and we had something to prove.”

Catcher Jeremiah Paredes, who also earned First-Team, All-District, echoed Beyale’s sentiment by saying that the Patriots didn’t get any respect early in the season as they started off with a 2-10 record.

“I feel like we’re the underdogs,” Paredes said. “Nobody expects us to perform like the way we did. There are a few coaches going around wondering how we scored that many runs. I just think they underestimated us.”

In the series, Paredes finished with seven RBIs. Most of those runs batted in came in the last two games.

“The first game we kind of came out flat and lost by 11 runs,” he said. “The next day we jumped on them. We wanted to send a message that we’re better than what everyone thinks of us.”

“After we lost the first game it kind of hit us,” the First Team, All District player said. “It was a realization that if we lose, we’re going home. None of us wanted to go home, especially the seniors, so it was a whole different mindset the second day.

“The energy was always up in the dugout,” he added. “It was never quiet. Even when we were up 15 runs it was always energy, energy and energy the whole time. That really carried us through the second day and that’s what changed the course of the game.”

Centerfielder Isaiah Martinez said everyone did their part, especially on Saturday as the Patriots plated 41 runs after scoring only two the day before.

“All of us did good,” said Martinez, who was also recognized as a First-Team, All-District player. “We all hit the ball. The first game we were kind of slow and the next day we put up a lot of runs.”

In the third game, the Miyamura junior was a single away from completing a cycle. He finished with a double, triple and a home run.

The tournament will now shift into a single elimination bracket as the Patriots will take on No. 3 Los Alamos at 10 a.m. today at Rio Rancho High.

“We have a pretty big idea of what they’re bringing,” Griego said. “They have two really good pitchers and some hot sticks; they have a lot of power with these wood bats.”