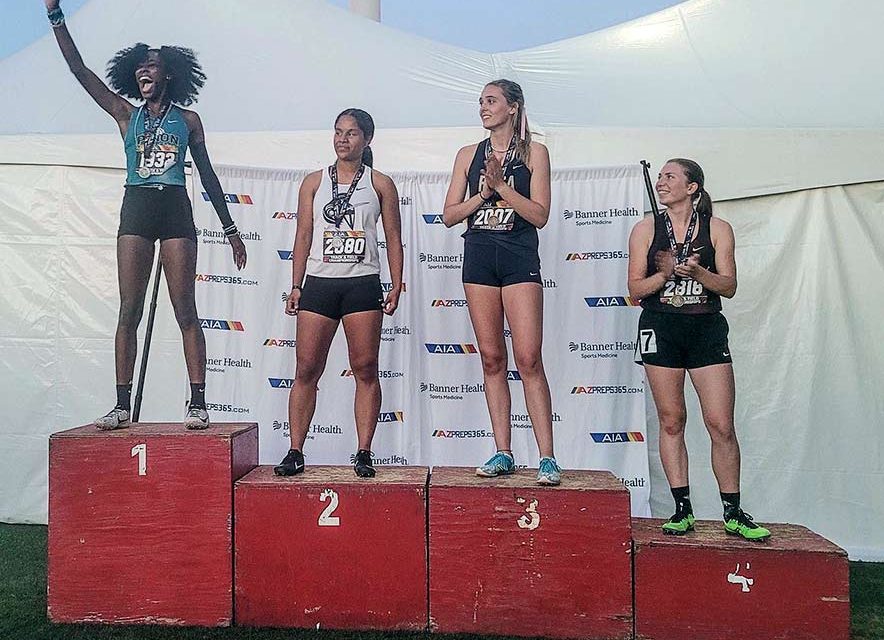 Navajo Times | David Smith
Piñon’s Trinity Bethea celebrates accomplishing her goal of winning state in the 200- and 400-meter dash. She’s the only Piñon athlete to qualify for state this season and the first in years to bring back two gold medals.

Trinity Bethea of Piñon High was the only one from her school to qualify for state.

Despite the pressure, she placed in all three of her events and became state champion for the 200-meter dash and the 400-meter run.

“It feels so amazing, knowing that I’m doing it coming from the rez, being half black and half Native American, from Piñon, such a small community, I just feel so honored,” Bethea said.

She participated in the 100, 200 and 400 races. This is her senior year and she was determined to win the gold, especially after missing so much due to the COVID-19 pandemic.

Bethea credits much of her success to her family and coaches as well as her own self-dedication.

She said she was always training hard during practice, even on off days she would push herself at home, saying she had to work ten times harder than ever before.

She was excited to make it to state, but wished the rest of her team made it, including her friends Delyla Denny and Kabibe Yellowhair, her teammates who were with her through the track, volleyball and basketball seasons.

But before she and her two coaches left, Piñon held a small party in her honor. She’d also be missing graduation.

Piñon’s sprint coach, John Hubbell, said he wasn’t surprised by Bethea’s performance, saying she was always been coming in first or close to first during the season.

Some of her friends followed her to state as well as her family, including relatives who traveled from North Carolina to watch her in her first state competition.

Her first event was the 100-meter dash where she placed second.

Hubbell can’t be certain when the last time a Piñon athlete brought home two gold medals, but it has been years since the last time the school went to state.

Hubbell said he is proud of what Bethea achieved. Although he only had the chance to coach her once due to the pandemic, he knows she is a stellar athlete, person and will do well after school.

“I talked to her about hard work pays off, if you really want it, you got to work for it because other athletes out there are doing the exact same thing,” Hubbell said.

Bethea plans to go to college though is not certain which one yet, but she knows she will be brining what sports taught her – dedication, hard work and communication.

Overall, she said, she had a amazing season, made even more special by her team, coaches and family.

“I really want to thank my coaches Aerosol and John Hubbell so much, my dad, my uncle and my family for coming out,” she said.

“And my teammates, especially Kayla and Delilah, even though they couldn’t be here,” she said. “I just know they were cheering for me from school, and I really appreciate everything they have done.”