Ramah looks for boatload of hardware at state 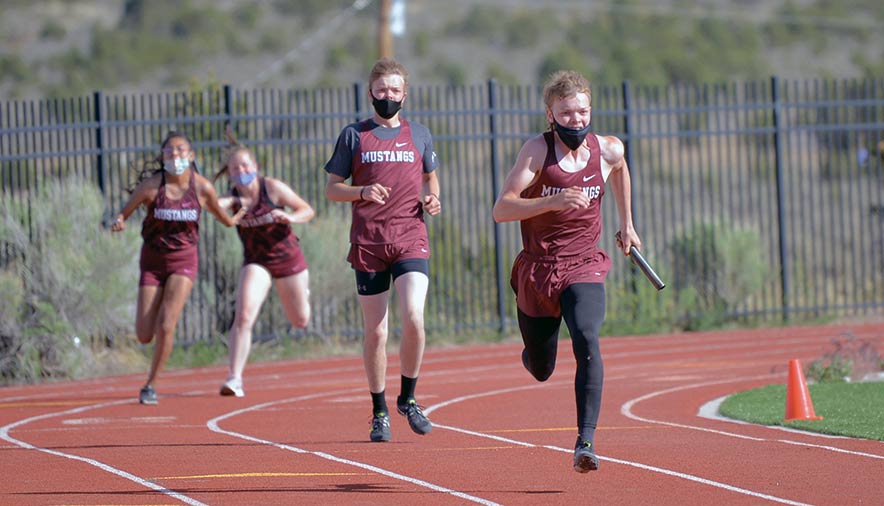 Navajo Times | Donovan Quintero
Ramah Mustang Waylon Clawson races down the track with the baton on Thursday in Ramah, N.M. The Mustangs qualified in four relay events, including a pair of top seeds in the sprint medley and 4x100.

With their tickets punched, the Ramah track team has an opportunity to bring home a boatload of hardware at today’s Class 1A state track meet.

The one-day meet will be held at the University of New Mexico’s Track-Soccer Complex in Albuquerque.

“Our boys’ relay teams are really strong,” Ramah coach Miles Killian said. “We’re expecting all of our relays on the boys’ side to be on the podium. On the girls’ side, we really have some good jumpers and middle-distance runners.”

“We know what we have but my expectation is to go out there and have them do the best they can,” the Ramah coach said. “I understand that the state meet is going to be hard this year with it being a one-day event. I just want them to have fun and we’ll see what happens.”

Nonetheless, Killian feels that his squad is right where they need to be at to challenge for a state medal.

“We’ve progressed the way we should have at the moment,” he said.

Killian said the relay teams are within reach of setting new school records.

“If we set those records, those records are going to be set at state,” he said. “They’ll have more competition to push them.”

Individually, Ramah has a few athletes that are seeded high including Burson, who has the fourth fastest time at 12:14. He shares that mark with three other athletes registered for today’s race.

Burson also has the second-best throw of 133-04 feet in the javelin event.

In the girls’ team, Ramah has qualified the 4×200 and 4×400 relay team with the latter seeded fifth.

Clawson, who is a multiple state qualifier, will take part in the long jump and triple jump as well. She is seeded third in the triple jump with a 31-05.50 effort.

In the field events, senior Janessa Jim is seeded seventh in the javelin throw with an 86-07 effort, a mark she hit during the June 10 district meet.

Prior to that her personal best was set on June 4 at the Grants meet when she threw the spear 82-feet.

“He really helped me out a lot,” she said, while adding that she was feeling pretty confident heading into the district meet late last week.

In the high jump, junior Wyatt Clawson has recorded the sixth best jump of 5-08. He cleared that at the beginning of the season and since then he’s been trying to top that.

Clawson said he was slowed by a knee injury his freshman season and COVID last year. Nonetheless, he’s looking to find his form.