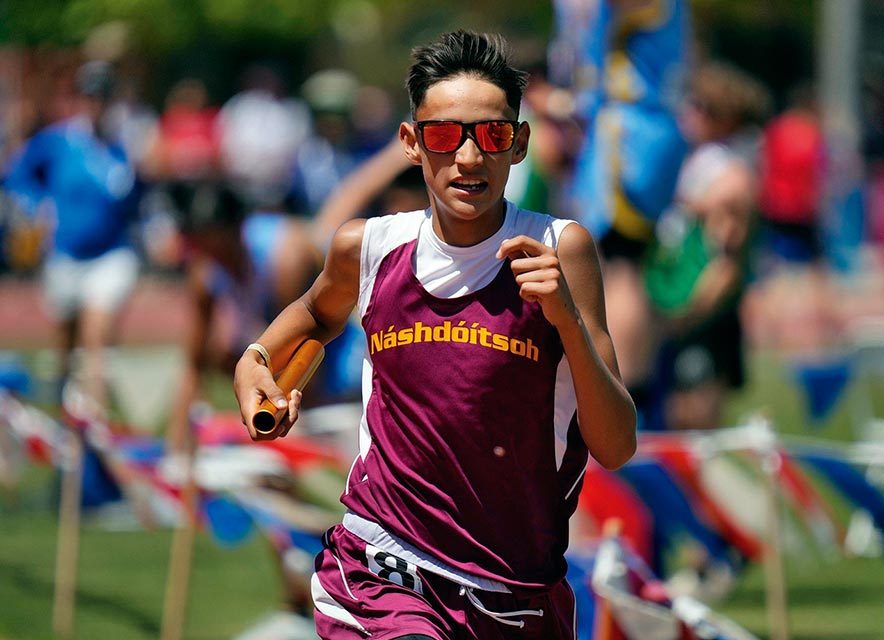 In its inaugural year, the Santa Fe Prep Blue Griffins ran an 8:45.11, setting the Class 3A boys state record.

On Saturday morning, three teams surpassed that benchmark in a competitive field, with the Tohatchi Cougars setting a new standard.

“Man, this means everything to us,” said senior Nicholas Yazzie, who ran the first leg of the race.

“We were hungry, and we worked very hard to get to where we’re at right now, so this took a lot of sacrifices,” he said. “What we did to prepare for this really paid off today.”

Despite the other teams having faster starts, Tohatchi stayed within striking distance. And in the final baton exchange, Peterson had to make up some ground as he trailed Zuni’s Kyle Awelagte by 50-plus yards.

“In my first lap, I kind of got a feeling that I could catch him,” Peterson said. “In the second lap, I picked it up more, and I got closer and closer until I got to 150, and that is when I caught him, so I had to push myself even more.”

On the final turn, Peterson said he got a boost from the cheering crowd. But admittedly, he was afraid that the Zuni runner would overtake him.

“I thought he would come back on me,” the Tohatchi middle-distance specialist said. “I didn’t want to slow down, so I just kept going.

Entering the state meet, Zuni and Tohatchi were seeded 1-2, with 1.1 seconds separating the two squads.

Zuni ran an 8:48.04 during the Harry Hayes Invitational at Bloomfield High on April 9.

The Cougars, meanwhile, ran an 8:49.14 at the Winslow Invitational on April 12. That was the last time Tohatchi ran that race before the state meet.

The Tohatchi sophomore said they’ve been running gap times of 2:10 in practice, so it seemed plausible that they could set a new state record.

Dauphinais was sitting third behind frontrunner Cottonwood Classical and Zuni in his leg.

“Once they got the baton, they took off running,” he said of the two teams ahead of him. “We were pretty far behind, and I tried my best to catch them. I kind of waited until the second lap to chase them.”

In the third leg, the Tohatchi squad made some strides in closing that gap, with Scott turning it up a notch.

“In my last lap, I was able to kick it in and get pass the Cottonwood kid,” Scott said.

Still, the Cougars had to overcome the 50-plus yard gap when Peterson took over.

“A big thanks to this guy,” Scott said of his teammate. “With Jared, we knew he could do it.

“I’m just so proud of my team,” he added. “It means everything to win this. We worked for it, and I’m glad we got it.”

The Cougars also took home some hardware in the open events, with Scott setting new personal best in the 1600 and 3200.

“I’m glad I got to do this because running has been a big part of my life,” he said. “I’ve met a lot of people through running, and it’s opened a lot of doors for me. I’m looking to grow more when I get to college (at Western New Mexico University).”

Peterson added one more state medal to his haul as he finished fifth in the 400 meters at 52.81 seconds.