The aftermath of COVID-19 has obliterated the volleyball field in District 1-2A. 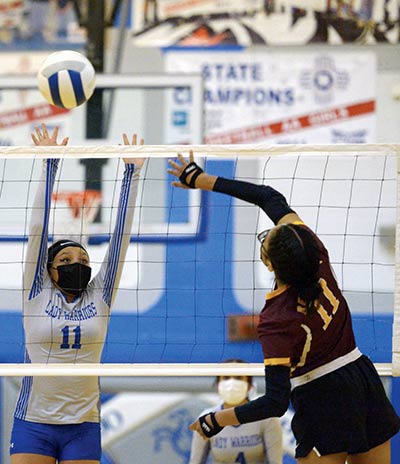 With Dulce and Laguna-Acoma opting out this year due to the pandemic, the district was whittled down to Rehoboth and Navajo Pine.

The two teams will play on Friday and if the Lynx complete the sweep they’ll punch their ticket for state.

But if Navajo Pine wins, the number of sets played will decide the district champion, and if a tie still exists the set scores will determine the winner.

“We can’t take for granted that we’re going to win district because Navajo Pine is a really good team,” Rehoboth coach Char Chapman said. “They can still win it.”

In last week’s meeting, the Lynx used a couple of late rallies to score wins over Navajo Pine in the first two sets.

Rehoboth battled back from a 22-20 deficit in the opening set and scored the final five points of the set.

Senior outside hitter RayNique Francisco got the rally going with a kill and on the next point sophomore middle blocker Eden Sun punched in a winner.

The Lynx closed out the set with defensive specialist Kari Kallestewa serving in three consecutive aces for a 25-22 win.

In the next set, the Lynx trailed 24-22 after an untimely hitting error. But the visiting team staved off a couple of set-points and after exchanging side-outs they won 29-27 with Ashley Skeets and Tambrey Tso delivering the final two points.

In a must-win set, the Warriors used a 9-0 run to erase a three-point deficit as they gained the momentum at 21-16 behind four kills from senior outside hitter Jordan Louis.

After a serving error, the Warriors went back to work as they finished out the set with three more winners including a nicely placed dink from eighth-grader Hailey Tomasiyo.

“It just comes down to who wants it more,” Chapman said. “We were fortunate to pull those two (sets) out but in the third Navajo Pine wanted that game and they showed it. They played well and they did what they needed to. They touched every single ball that came over no matter what we did.”

In the fourth set, Navajo Pine opened up a 6-1 cushion but Rehoboth battled back and tied it at 7-7. The set was tied five more times with the last one at 16-all before the Lynx gained the separation they needed to end the match in four sets.

“It came down to getting our serves over,” Chapman said. “The first serve needs to go over and you can’t give (the Warriors) anything because they’ll take advantage of it.”

Navajo Pine coach Lindsey Brown said her team can compete despite its 1-9 record. Of those losses, they have been swept only one time.

“They’re clicking but it’s the simple mistakes that gets to them,” she said. “And when they start to put themselves down it’s hard to pick them up.”

Brown said her young team has lost five games in four-set matches, and three have gone the full distance.

“The game we played is like all the games we played this year,” she said. “We’re right up there with those teams but we start to lose it at the end.”

Despite what their record shows, Brown said her team is progressing.

“The girls are improving,” she said. “The set that we won is the best they’ve played all year.”