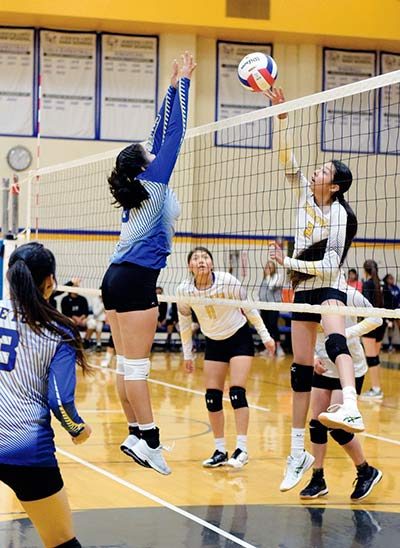 Rock Point middle hitter Tamira John (2) goes up for an attack against a Fort Thomas player during the Joseph City Invitational. On Tuesday, Rock Point defeated St. Michael in a doubleheader and captured the 1A North title.

After playing the bridesmaid the past two years, the Rock Point Lady Cougars have secured the 1A North volleyball title after Tuesday’s doubleheader win over St. Michael.

Going into Saturday’s league game with Ash Fork/Seligman, the Cougars sport a 10-0 record.

“This was the year for these girls,” Rock Point coach Melvin Arthur said. “They’ve been playing together for the last couple years and this year I thought they could win our conference.”

With St. Michael losing eight core seniors last season, Arthur said he knew the Lady Cardinals would be rebuilding. With that he prepped his girls for this season by entering them in a couple of competitive tournaments.

The Cougars finished third at the Rehoboth Invitational last month and two weeks ago they had a good showing with a 3-2 record at the Chandler Prep tournament. In that tournament, Rock Point played a few 4A and 3A schools in the Valley.

With their success, Arthur was hoping his girls would win the crown at the Joseph City Invitational this past weekend. The Cougars came close as they finished third overall behind Williams and Fort Thomas in the 11-team bracket.

“I really thought we could win this tournament but unfortunately it didn’t happen,” Arthur said. “When we played at the Rehoboth tournament we played against some tough New Mexico teams. (Two weeks ago) we went to the Chandler Prep tournament and the girls played really well.

“I was really proud of them and I thought we could carry that momentum over to this tournament,” he said. “I was hoping that we could play at that level, unfortunately that didn’t happen.”

Rock Point lost its first game in bracket play to Williams on Saturday morning as they were sent to the loser’s bracket. The Cougars won four straight games before being eliminated in the tournament with Fort Thomas winning in straight sets in the best of three match.

“I think my girls got tired toward the end,” Arthur said. “They played four straight games and that took a toll on them. I was hoping that we could have done better but I think this is a good tune up for the postseason. It was good for our girls and our program.”