A ‘we,’ not ‘me’ mentality: Miyamura girls win third state wrestling championship 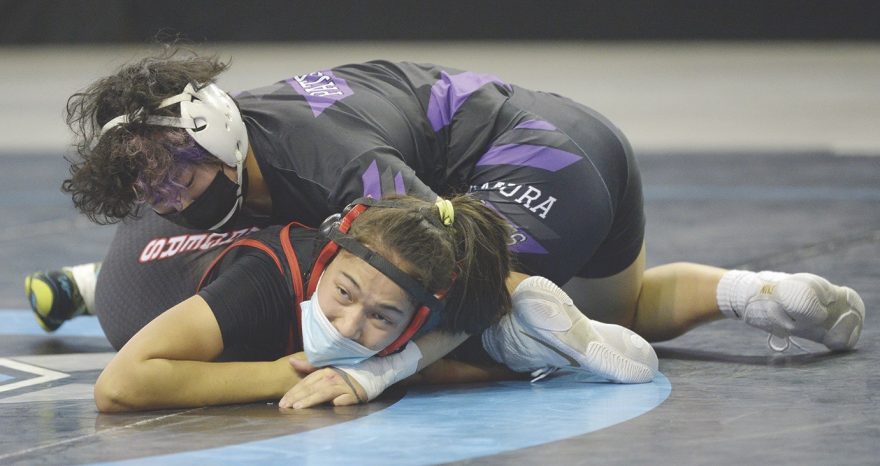 Just as it had done in three of the previous four years, the Miyamura girls wrestling team hoisted its third championship at the New Mexico state wrestling tournament.

The first title, of course, happened during the inaugural season the New Mexico Activities Association offered an all-girls state wrestling tournament as an exhibition tournament in 2018.

It was still an exhibition tournament the following year until the NMAA sanctioned the event as a state tournament in 2020.

In the year that it got sanctioned the Patriots won the state title and on Saturday night they defended it in dramatic fashion before a large crowd at the Rio Rancho Events Center.

“This is our third state title in four years,” Miyamura coach Nate Sellers said. “I know the first two weren’t recognized but all in all we recognize each girl the past few seasons for their grit and determination. And if the (NMAA) didn’t recognized it – we did.”

The fourth state title didn’t come easily. In fact, the Patriots faced their most difficult test of the season as they eked this one out by a mere half-a-point. 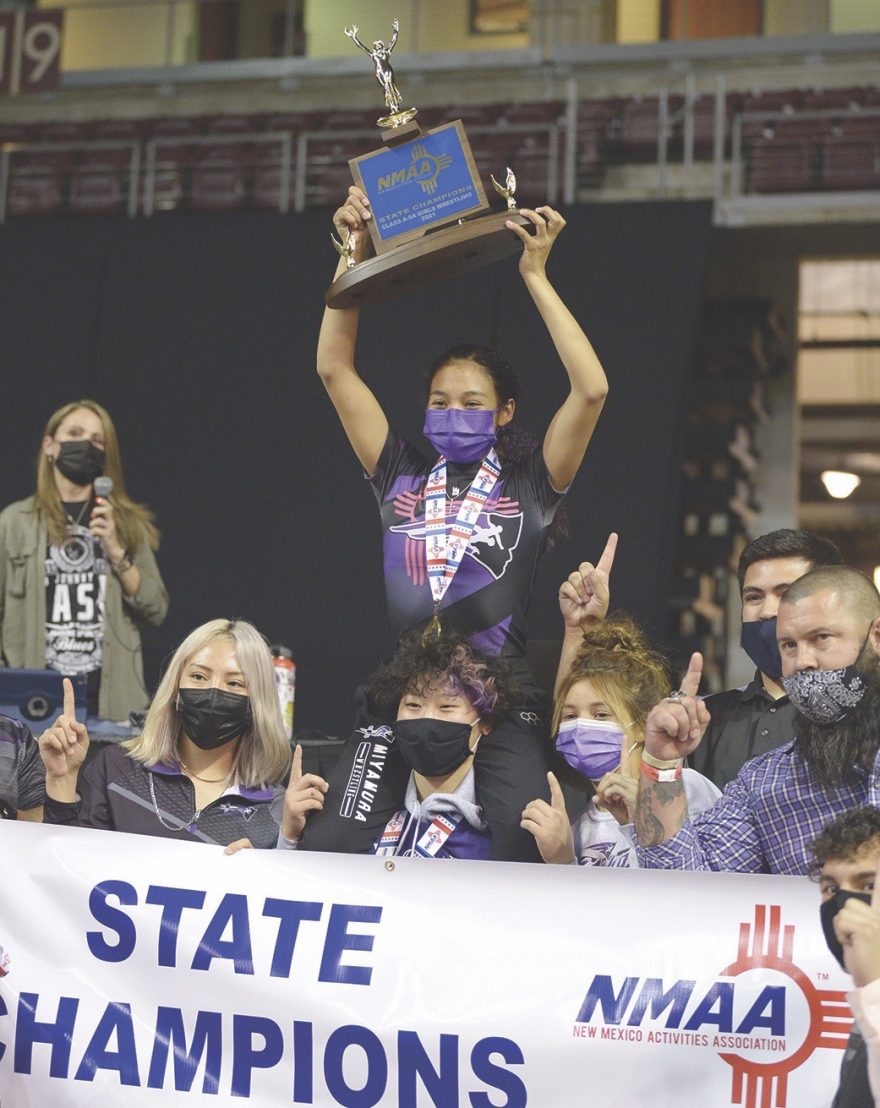 Buoyed by a pair of first-place finishes from freshman Lorianna Piestewa and senior Yele Aycock, the Patriots finished with a team score of 50 points while Albuquerque Atrisco Heritage tallied 49.5 points.

“Every match that was wrestled out there determined this championship,” Sellers said. “It’s something that we preach in the room – it’s a ‘we’ mentality and not a ‘me’ mentality – and it showed today.”

All told, the Miyamura girls qualified three girls to state with Piestewa winning gold at 100 pounds and Aycock claiming the 132 title.

At 120 pounds, sophomore Taniel Espinosa was one match away from earning a medal.

Aycock, who capped a stellar career, won her fourth state title – two as an exhibition and two as a state-sanctioned event.

“This is truly exciting for me,” Aycock said when asked about the standard she set as a four-time girls’ wrestling champion.

“That’s all great, but this year I was more focused on trying to win a team title for my team,” she said. “That’s not something that’s common but I’m just real grateful to have won four state titles with Coach Sellers. He’s been there since the start of it so it’s all good.”

In the eight-man bracket, Aycock scored a pair of pins, including her finals against Albuquerque Academy wrestler Melinda Modisette.

“It was kind of an emotional ride because I wasn’t sure if I was going to get that last match or not,” the Miyamura wrestler said. “I was told that she was going to leave for her high school graduation but I’m glad she stayed.”

In her final match, Aycock said she gave all she had, as her pin didn’t come until the last 14 seconds of the match.

“I tried to keep my feet moving and I tried to do my moves,” she said. “I tried to stay calm under pressure.”

And with the team title at stake, Aycock said she tried to get as many bonus points as she could.

In her first match, the Miyamura wrestler advanced without breaking a sweat as she moved into the second round with a forfeit.

“I’m not sure what happened to the (Moriarty) girl, which is really disappointing because I wanted to wrestle as much as I could with it being my last tournament,” Aycock said.

That forfeit pitted her against Aspen Deherrera of Los Alamos, a wrestler she faced multiple times during the regular season.

“That was kind of fun, it helped get all the nerves out,” she said.

For the season, Aycock finished the year at 13-0. And with four state titles, Sellers said his pupil has raised the bar for future state wrestlers.

“It’s a once-in-a lifetime achievement,” he said. “She’s really trail blazed the way for our program and she’s just amazing. And you know, Yele, has really handed off the reins to these girls and next year were just going to come back just as tough.”

In addition to Aycock’s exploits, Sellers was also impressed with Piestewa’s showing as his freshman wrestler captured state with two pins and a major decision.

“Lorianna was expected to win,” Sellers said. “She went in as the No. 1 seed and she was state runner-up as an eighth grader. I have no doubt in my mind she’s going to create history in the state of New Mexico alongside Yele.”

Entering the state tournament, Piestewa said she was focused on winning the state crown, as this title eluded her last season when she lost by a fall.

“I was so close to it last year,” she said. “This year I got even closer with all the hard work. I was in the room practicing every day and I’m just so grateful that I got it.”

After earning pins in her previous two matches, Piestewa gave Las Cruces wrestler Alyssa Sedillo all she could handle in the 100-pound championship match.

“It was just practice and hard work,” Piestewa said of outworking her opponent. “You can’t get anywhere unless you put the hard work in.”

With a state title in hand, the Miyamura freshman finished the year at 15-0.

“It’s amazing,” Piestewa said of going undefeated. “Last year I got beat by five amazing girls, and this year since I’ve been practicing so hard, I got to see how much I improved. It just made me feel a whole lot better as a wrestler and a person in general.”