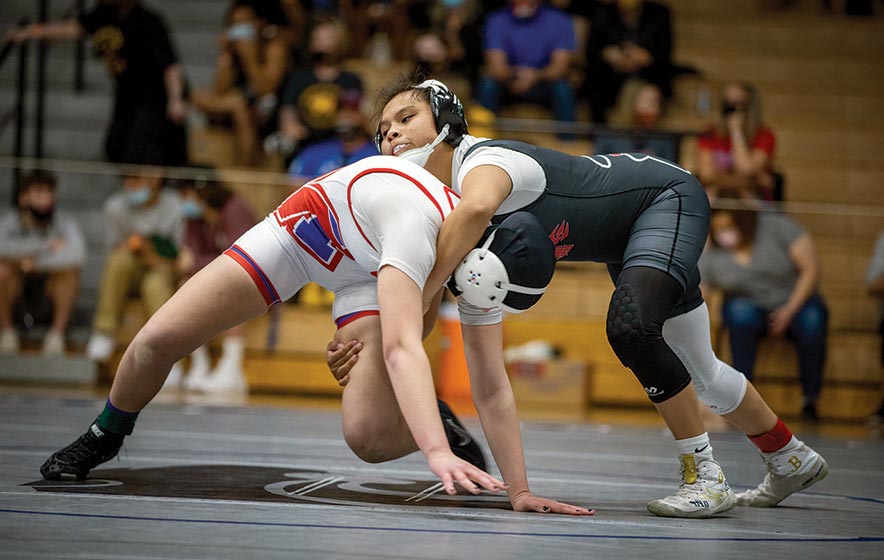 Going into the Arizona all-girls state wrestling tournament, there were question marks hanging over how Sharmayne Crank and Latasha Slim would do.

The two Page wrestlers lacked mat time experience as they entered the tournament with only one exhibition match under their belts.

Despite their predicament, the two wrestlers exceeded their coach’s expectations as they wrapped their prep careers with state medals on Saturday at Mesquite High School in Gilbert, Arizona.

At 138, Crank placed third while Slim took sixth in the 145-pound weight category.

“I was really impressed with how they wrestled,” Page interim coach Dakota Richardson said. “Getting to the podium was a big deal for them. They worked so hard and given that they only had four to six weeks of practice they were mentally prepared. They responded very well and they didn’t back down from a challenge.”

Richardson said it was great to see them battle throughout the two-day tournament. After the first day of competition, both wrestlers reached the quarterfinals of their respective bracket.

Crank took it a step further by making the state semis as she faced eventual champion Camry Carter of Casteel High School as the 5A wrestler earning a fall in 1:48.

“I wasn’t really prepared for that,” the Page wrestler said. “I was nervous going into the match and that’s what got the best of me.”

In her next match, Crank pinned Liberty’s Claire Avery in the opening quarter as she advanced into the third place match.

Against a much tougher opponent, the 138-pound Page wrestler found herself trailing 7-1 to Centennial senior Angelina Samarripas after one period.

Crank got three of those points back, including a reversal before she put Samarripas on her back for a fall.

“I got down but I had to keep pushing because this is my final season of wrestling,” she said. “I had to keep trying because she was really strong. I wasn’t expecting to pin her this early, I thought we were going to go three periods.”

Even though she trailed very early in the match, Richardson said he never doubted his wrestler.

“I’m comfortable with her in situations like that,” he said. “She’s a really tough girl and going into that second period I had a lot of confidence in her. She actually wrestles well when she’s down and I have complete trust in her.”

In the 145-bracket, Slim lost her quarterfinal match to Liberty’s Sara Schmoker by a fall. The Page wrestler then won her next two matches by pins for a chance to medal.

Unfortunately, Slim lost her final two matches as she placed sixth. In her final bout she lost to Mountain View’s Karstin Hollen by a fall.

With very little preparation, the Sand Devil wrestler was nevertheless satisfied that she got on the podium again as she placed third her sophomore season.

“I’m really proud of what I did because my whole season was basically state,” she said. “It was a pretty tough tournament but I felt that I could have placed a little bit higher if I had more conditioning.”

Nonetheless, Slim said her coaches did the best they could in preparing her as she had one month to train.

“She struggled with her cardio, conditioning,” Richardson said of his pupil. “And with COVID, it didn’t help her being out for so long.”

And although she struggled with her conditioning, the Page coach was happy that she got really far in the tournament.

“To have her place at state was good for her,” he said. “It was a tough tournament for Latasha. We were hoping that she would cut to 138 but she didn’t have enough time to cut that weight.

“She gave up a little weight but I’m really happy for her,” he said. “She has that nasty headlock and she gave it her best.”