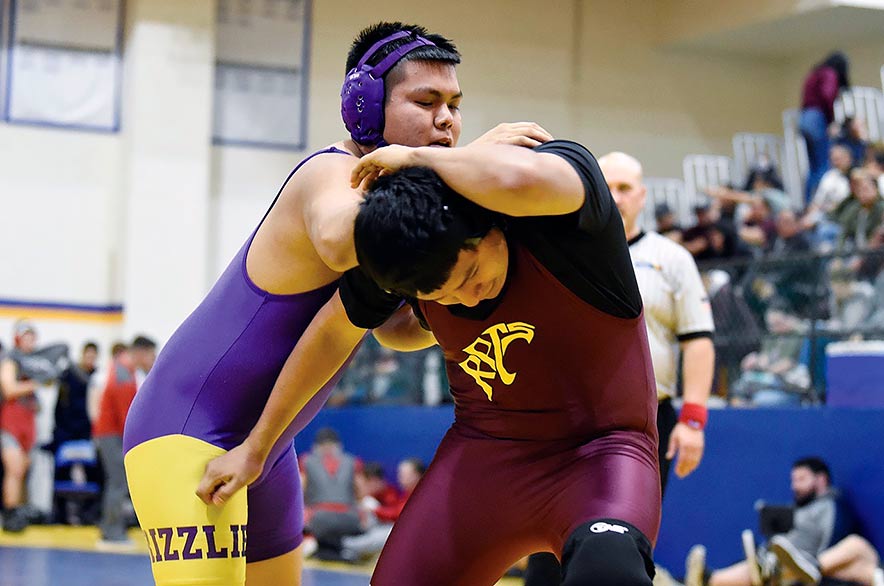 The third-year coach is hoping to get his first state qualifier this season. Last season, Begay said he had a couple of wrestlers come up one victory shy of going to state.

“I wish I could take them all but (realistically) I have two wrestlers that could go,” Begay said at last weekend’s Joseph City Invitational

“They’re hungry but it all comes down to how bad they want it. It’s going to be up to the kids,” he said. “They are going to have to want it and it starts from here. All the tournaments and meets we go to will get them ready.”

Of the 15 wrestlers in his program Begay brought his top four wrestlers from each squad to the 23-team Joseph City tournament.

“I left several wrestlers at home,” he said. “I wish I could have brought everybody but a lot of them are first-time wrestlers.”

Because of the team’s budget, Begay said he left those wrestlers home.

Between the two squads, the girls’ team finished in a two-way tie for seventh with River Valley as they amassed 35 points each.

The Lady Grizzlies were led by sophomore Maylene Ramires, who placed second in the 135-pound class. At 145, Audrianna Tracy finished fourth while Johanna Bowsley (110) and Gymenisha Bryant (125) took fifth.

The boys’ team, meanwhile, got a fourth place finish from junior Isaac Blake in the Blue heavyweight division. Shonto Prep also had a pair of wrestlers place in the Blue bracket with sophomore Tymicus Yazzie (160) and senior Carson Bryant (195) earning seventh-place honors.

“They did all right but they could have done better,” said Begay. “It’s just going back to the basics. Some of the stuff that we worked on they didn’t do.”

With some of the larger schools taking part, the Shonto Prep coach said some of his kids said they were “intimidated” when pressed about what they could have done better.

“A lot of these wrestlers here having been doing this a long time,” he said. “They have the basics down so that was a factor but I’m proud of my guys. Some of them lost some close matches and overall they did very well even though they were under pressure.”

As for his team, the Shonto Prep coach said Bryant and Blake are his two best grapplers and they are the ones carrying the team.

“When they wrestle they leave everything on the mat,” he said, adding that these two pupils are his best chances of getting someone to state.

Begay said since he took over the wrestling team his program has grown to twice its former size.

“Our program is building and getting bigger,” he said. “We have more females on the team.”

And with a junior high feeder program they just started this season, Begay is expecting his program to grow even more as they enlisted 19 kids this season.