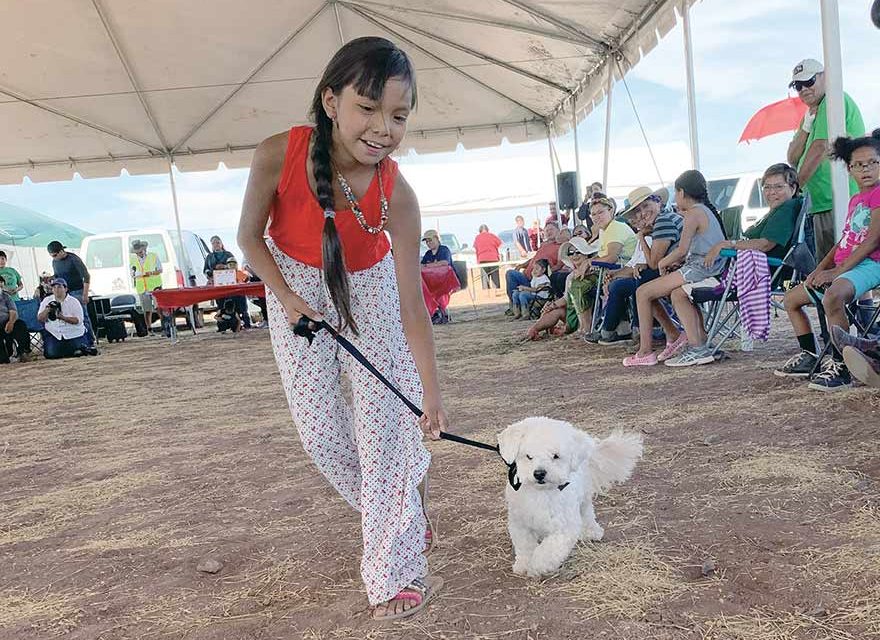 Navajo Times | Cindy Yurth
Tenelle Tenorio and Jacques make a lap around the arena at the first-ever Bow Wow Dog Show at the Central Navajo Fair.

It was a bit disappointing that there weren’t more rez mutts at the Central Navajo Fair’s first-ever Bow Wow Dog Show. There were a lot of Chihuahuas, shih tzus, pit bulls and even a purebred Australian shepherd owned by former Olympic running hopeful Alvina Begay, who not surprisingly won best of show. But, their owners insisted, they’re all rez dogs.

Take Jacques, the elderly white toy poodle owned by Tenelle Tenorio. He looks like your average foo-foo dog. But he’s a survivor. Tenelle’s mom’s sponsor in California passed away, leaving Jacques alone for a whole week while the family debated what to do with him.

Hearing about the situation, the Tenorios didn’t think twice. They jumped in the car, drove all the way to California and brought Jacques back to the rez, where he bonded firmly with Tenelle. He’s definitely a rez dog now. According to the family, one of his favorite activities is rolling in horse poop.

A lot of the dogs at the show, perhaps the majority, were rescues in one form or another. Leilani, a brown rez mutt of indeterminate breed who used to hang around the Chinle hospital, followed Nick Yazzie’s girlfriend home from a walk one day. She brought him to Yazzie, who was living in Durango at the time, and asked him to take her to the shelter there. “It was the weekend, so I was going to take her in that Monday,” Yazzie recalled. “But by the time Monday rolled around, I just couldn’t. She’s been with me ever since.”

Most of the dogs at the show wouldn’t have made it past round one at Westminster. Some were so nervous, they had to be picked up and carried around the arena. Only two could satisfactorily shake hands. The “Best Trick” category was won by Milo the Rottweiler, who merely trotted through a hoop at ground level. But one thing was clear: these pooches are loved.

Alessandra Uentillie, who organized the dog show, said the fair committee was looking for a fun family activity, and the dog show definitely qualified, as entrants ranged from 8 to 80.

“At first, we were thinking about a husband-calling contest,” said Uentillie. (It’s a thing; Google it.) “But we weren’t sure we would have enough brave contestants.” They figured dogs would be less easily embarrassed than husbands, and sure enough, 21 people entered their pets — not a bad turnout for a first-time event.

Enough fun was had that the committee is considering making the show an annual event, so start training your pubby now if you want to beat that show-off Dale the Aussie.

• Best in Show, Handsomest Hound and Most Talented — Dale