Calendar gives a glimpse back in time

In 2007, a friend showed Vern Ince, of Dolores, a box of old glass negatives he said he had found in the back of an old trading post. A lot of the pictures were of Navajos.

Ince, who is Anglo, had worked with a number of Navajos in the uranium mines back in the 1960s and had kept in touch with a few of them. “I thought my Indian buddies would get a kick out of the pictures,” he said. He offered to buy the collection, but the man refused, saying they weren’t for sale. They each went on their merry way.

But a little later, Ince tried again. “He was a little down on his luck and needed some change,” Ince recalled. Ince ended up taking home a box of about 300 glass negatives and some film ones.

But when he got home and started holding them up to the light, he realized they were far more than a conversation piece. These were century-old photographs of the northern part of the reservation, marking such pieces of history as the first oil well. “I kept trying to think of something fun to do with them,” he said.

Last year he mentioned the plates to his friend and sometimes business partner Dave Reinecke, also of Dolores. Reinecke was a builder but also a photographer of local renown. 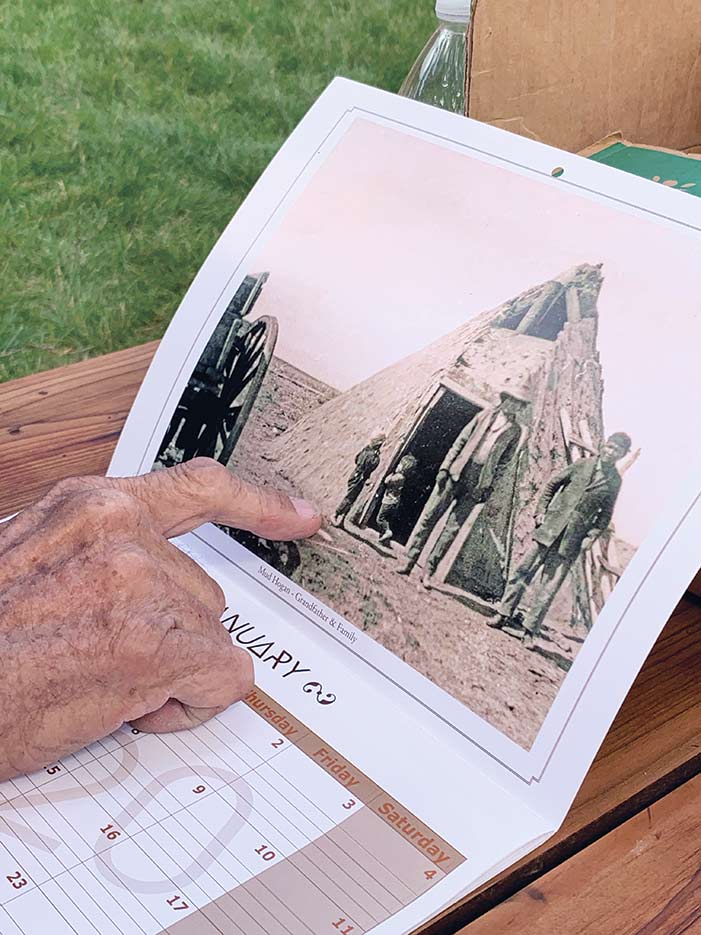 Navajo Times | Cindy Yurth
Vern Ince points out details in a photograph in the 2020 Hogback in Time calendar.

At first, Reinecke recalled, he was lukewarm. “I thought, ‘Why would I be interested in a bunch of pictures of people I don’t know?’” he said in an interview at his home overlooking the Dolores River Saturday. “Then Vern said, ‘Dave, these photographs are over a hundred years old!’ That got my attention.”

The men, both 77 and retired, had time for a project. Ince suggested a poster, but Reinecke, who estimated at least a third of the negatives were in good enough shape to print, thought a calendar would show them off to best advantage and be an inexpensive way to get them into the hands of people who might like them, while making a few bucks for the buddies. “By this time, it was already October (2019),” laughed Reinecke.

The men chose 12 photographs — some of the earliest ones, since the calendar would be for 2020 and they could call it the “Centennial edition.” To give it more appeal, they dubbed it the “collector’s first edition,” although they weren’t entirely sure there would be a second one.

They printed 15 calendars, thinking they could give some to their friends and sell the rest. “Poof! They were gone,” recalled Ince. “So then we printed 100. Poof! Those didn’t last much longer than the 15.”

They went back to Southwest Printing and asked for another 1,000. “We thought we’d have lots left over,” said Ince. “I made two half-day trips to Farmington, one to Gallup and one to Bluff, and sold almost all of them.”

Reinecke and his wife Jan, a former nurse and current technophile, came up with a process to scan the negatives, turn them into positives in Photoshop, and change the resulting black-and-white images to sepia tones. Reinecke uses Photoshop to edit out the little scratches and flakes that you would expect 100-year-old glass negatives to have, but “I don’t get them too perfect, because that’s part of their charm.”

He spends four to five hours on each photograph. After picking the pictures they wanted in the calendar, the men matched them to the months as best they could.

For instance, they knew the Navajos would have sold wool in the spring and lambs in the fall. As for the year, they looked for tiny details (a date on a poster, an odd article of clothing) that might give a clue. In one case, Reinecke was able to date an image by Googling the metal wheels on a bassinet. If there was a car in the photos, it was easy, given Ince’s passion for vintage automobiles.

To illustrate, Reinecke pulled up a picture on his computer. “Nineteen-twenty-nine Chevy Landau,” pronounced Ince after a few seconds’ perusal. The friends are now excitedly working on the 2021 calendar, which will have pictures from the 1930s, including some from a friend whose grandfather was a photographer. “That’s also a really interesting time in history, because you had the Depression and the Indian Reorganization Act,” said Reinecke.

One of the photos, they believe, depicts Navajo leaders signing a document that might be the act. They don’t look particularly thrilled about it.

Producing the calendar has taught the men a lot, as Navajos who buy the calendar often educate them about certain images. Ince, for example, learned the difference between a male and female hogan, and also between Navajo and Hopi footwear.

The October picture in the 2020 calendar, titled “Apples for sale,” portrays two Native women holding up pans of apples to the windows of a passing train. While shopping the calendar around, Ince referred to them as Navajos, but quickly learned that, judging by their moccasins, they were Hopi or Zuni. “I got a lot of grief for that one in Gallup,” he chuckled.

Ince and Reinecke call their new company Hogback in Time, a combination of “back in time” and the iconic land formation in northern Navajo. In addition to the 2021 calendar, they plan to print some greeting cards and post cards. They already have plans for 2022 as well: another old photograph calendar, but also one with the work of a local artist whose style they like and are trying to promote.

As for the photographer whose work is featured in their first calendar, they may never know who he or she was. But they’re grateful that person’s work found its way to them.

Information: The 2021 calendar will be out in a month and will be available at trading posts in the Four Corners for about $10. For more information, email hogbackintime@gmail.com