Singer D. Johnson, 59, hopes that one day his original songs will be picked up by a national recording artist. But for now, he will continue writing original songs. 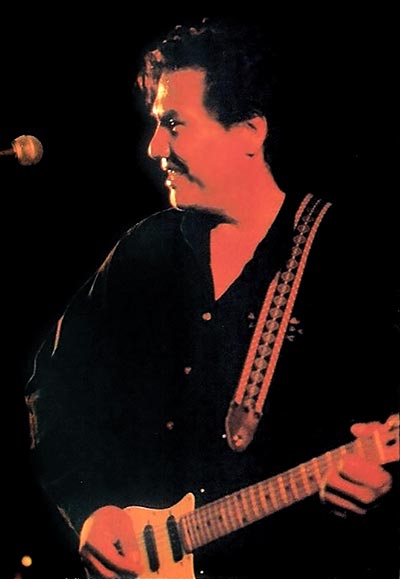 Courtesy photo
D. Johnson, 59, from Teec Nos Pos, Ariz., hopes that one day his original songs will be picked up by a national recording artist. In the meantime, he often visits the capital of country music, Nashville.

“As far back as I can remember, I was on the stage,” he said. “My brother used to stand me on the chair. He had a band called The Westerneers. He was killed in a hunting accident in 1971.”
His brother, Wesley Johnson, was 18.

“That’s all I remember,” he said. “I still remember that song I used to sing by Johnny Horton (All for the love).”

Originally from Teec Nos Pos, Arizona, Johnson is Kinlichii’nii born for Bit’ahnii. His chei is Ashiihi and his nali is Todich’iinii.

Singing has always been a passion and he has done so without any formal coaching.

“To this point, I still don’t know if this is what I want to do,” he said. “It’s been something that has been a part of my life.

“The sad part is just when I was about to get the tip of my toe into the Nashville music industry, I was only to enjoy it probably about a few months, but I was deemed too old,” he said. “I wasn’t marketable because they were looking for young, new artists.”

For many years the major record labels that signed artists controlled how music was made, distributed and by whom in terms of songwriters and producers, Johnson noted.

Currently, many artists are starting their own record labels to create and distribute music and to have control.

In 2007 Johnson performed “Midnight Song” in a showcase called “Writer’s Realm” at the Commodore Grille where music producers looked for music and artists.

“The very first time I went to Nashville, I had a No.1 hit song, I went over there proud, not (egotistical), but proud of having a No.1 hit,” Johnson recalled. “I got up on stage and I sang my song.

“Then these other two also sang their songs,” he said. “Right off the bat, they just floored me. These guys were amazing. I felt like a silly rez dog that got (ran) over by a truck, rolling under it.

“I guess I could’ve ran home with my tail tucked between my legs,” he said. “It was embarrassing. They are amazing artists and they have no mercy.

“They don’t care if your song is cheesy or not,” he said. “They’re going to play their music. But they are some of the nicest people.”

The amount of talent in Nashville is humbling, Johnson said.

“When I go to Nashville, I come (home) feeling better because there are literally thousands and thousands of musicians and songwriters. They are super amazing,” he said. “And many of them are still in line knocking on the door.”

Entertainment is a cut-throat business and the trend among producers is to find a young and talented artist. Johnson added that many are writing original music and performing in hopes they are noticed.

He traveled to Nashville frequently since 2007 and throughout that time he learned “more tricks of the trade” when it comes to performing and songwriting.

When it comes to songwriting, Johnson said one of two things happen. It’s either the humming of a melody that comes to him or writing down a verse that expands.

Once he feels like a song is ready, he sends what he prepared to a studio producer in Nashville.

“I realized that (Nashville) is like a casino – you put in all that money as an investment and you’re gambling on that chance,” he said. “Like a casino, you may get lucky and hit the jackpot. It’s like that with the music industry.”

Johnson has not performed on the reservation but welcomes an opportunity, he said.

The album “Midnight Song” sold out on his website and his “K-Town” album is available.

The album “K-Town” is a mixture of country, rock and gospel. The 10 songs featured are professionally crafted and some of the highlights include “K-Town,” “Blind Man,” and “I stand.”