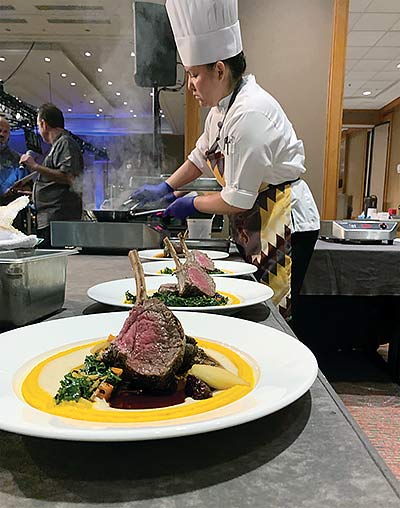 Debe Honibah Brady, originally from Chilchinbeto, Arizona, serves up her medal-winning venision dish at a national cooking competition for college chefs in Denver last week. Brady works for the University of Wyoming in Laramie.

College food gets a bad rap, but if you’ve visited a college lately, you know that’s undeserved.

Colleges and universities are competing to hire top-notch chefs to keep students healthy and satisfied — it’s one thing today’s foodie generation definitely looks at when picking their future alma mater.

College chefs even have competitions to show off and hone their skills, and at last week’s National Association of College and University Food Services National Culinary Challenge in Denver, a Diné chef who works for the University of Wyoming claimed third prize. The judges snapped up Debe Honibah Brady’s “Duet of Venison,” a pan-roasted venison chop and venison marrow roulade served on a warm blackberry-beet quenelle with bordelaise sauce. She complemented the rich meat with pan-seared foie gras, braised kale (with piñons, of course) and roasted root vegetables.

Brady, 29, originally of Chilchinbeto, Arizona, was quick to share the credit. “My co-workers helped me come up with the menu,” she said, adding that as the competition drew close, they often covered for her so she could focus on preparing for the cook-off. “It was a team effort,” noted the former Monument Valley High football player and wrestler.

TV chefs make it look easy, but you don’t just stroll into the competition kitchen and start cooking.