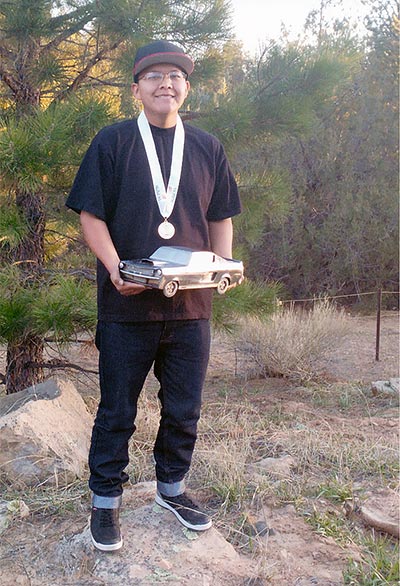 Courtesy photo
Ryan Descheny, a senior at Navajo Pine High and a student at UNM-Gallup, holds the car for which he won a gold medal in welding April 9 at the New Mexico SkillsUSA competition held in Albuquerque.

Descheny qualifies for the national competition in Atlanta and plans to leave for Georgia on June 20.

He is taking welding classes at the University of New Mexico-Gallup and represented the college when he won the New Mexico competition.

His mother said he is a Native American “Navajo” who is from and lives on the Navajo Nation.

“Winning first place, receiving a gold medal, and bringing it back home was a huge achievement,” she said. “He’s a young man who works hard and wants to be recognized by the Navajo Nation.

“Anybody who has a dream and a goal can do anything in life,” she said. 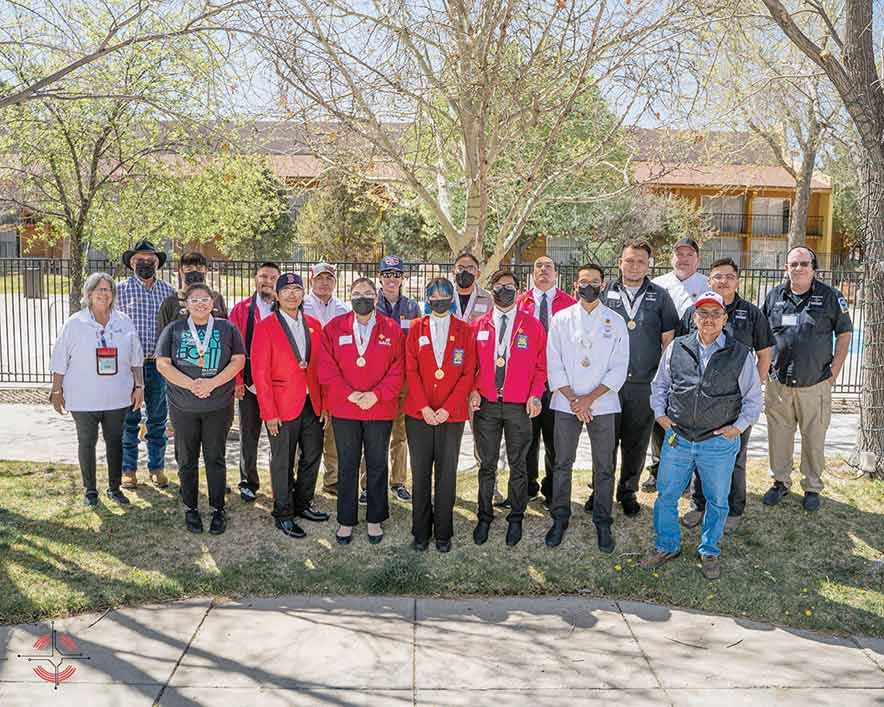 Courtesy Photo
The Navajo Technical University team, with medal winners in front, are shown at the New Mexico SkillsUSA competition in Albuquerque on April. 9.

At the state leadership and skills conference in Albuquerque, NTU had 17 students entered. One bronze medal was for a three-person team.

These five gold medalists are eligible to compete at the National SkillsUSA Leadership and Skills Conference in Atlanta in June.

The workshop is June 19 to 25 and students will stay on the NAU campus and learn how to tell stories using the skills of digital filmmaking, photography, audio production and broadcast journalism.

This year’s workshop will also include a Broadcast and Media Career Fair, where students will learn about internships and career opportunities from Arizona broadcast and media professionals.

Tuition is $50. Scholarships are available.

The awards celebrate and honor full-time teachers from pre-kindergarten to 12th grade.

If nominated, teachers submit an essay with letters of support. A panel of five judges will score the applications and determine the top six candidates in each category. The top six will be interviewed.

All finalists will be recognized at an event in spring 2023. The teacher of the year will automatically receive a nomination for the Arizona Teacher of the Year Award.

Nominations must be received by June 1 at 5 p.m.

Winners are competing for a total of $22,000 in cash prizes. This year, community members are invited to attend in person or stream the presentations online.

In the college track, the first-place student team for FLC and SJC will each earn $5,000. Then, in the final round, they will compete head-to-head for an additional $5,000 prize.

In the alumni track, students who recently graduated from FLC and SJC will compete to win a $5,000 prize for the best business plan.

High school students from the Durango/Four Corners regions compete to win up to $8,000 in scholarships to the FLC or SJC and cash prizes up to $500.