By Deb Haaland
Secretary of the Interior

This is the sad and ironic truth — even though Indigenous communities in North America are some of the oldest democracies in the world. 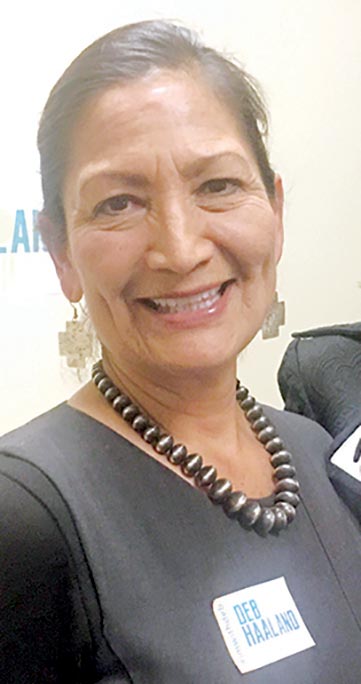 Participating in governing is a time honored and sacred tradition in our Indigenous communities. Our ancestors and relatives survived against seemingly insurmountable odds, which is why we owe it to them to make our voices heard at the ballot box.

This is why I became an organizer in the first place. I knew that generations of laws restricting the right to vote for Native people impacted our participation in elections, and that it would take a concerted effort to register voters; ensure they had the information about voting dates, locations and hours; and personal outreach to increase voter participation.

With my voting rights champion, World War II veteran Miguel Trujillo in my mind, I would lace up my sneakers, drive out to remote communities in New Mexico, and go door to door.

I can’t count how many times I knocked on someone’s door and heard that it was the first time anyone had ever reached out to them to register to vote.

Since my organizing days in the early 2000s, we’ve made strides to increase the Native vote. But as we fast forward to today, we face the same battles.

With President Biden’s support, we are working with states to expand access to voting at Interior-operated post-secondary tribal institutions.

In May, I was proud to announce that Haskell Indian Nations University in Kansas and the Southwestern Indian Polytechnic Institute in New Mexico will be designated voter registration agencies under the National Voter Registration Act.

This action seeks to remove barriers to voting by allowing these institutions to facilitate voter registration opportunities for enrolled students and members of those communities.

These may seem like small steps, but to the students at Haskell, SIPI and Native communities everywhere, this is one way we can live up to our democratic Indigenous roots.

Participatory democracy is part of who we are as people – collaboration, consensus and common good are built into our cultures and traditions.

Voting is sacred and we must use our voices in every election. Our votes reflect our values and the issues we care about.

When we vote, we can impact the direction of the country, because our votes determine who has the power to make decisions for our communities.

From school board, to governor, to president – leadership matters. Our communities will thrive when leaders in elected office know and understand the federal government’s obligations to tribal nations.

When I was in Congress, I heard from many tribal leaders about how much more efficient it was to walk into a meeting with an elected leader who already understood and knew what trust responsibility meant and what government-to-government relationships are.

It is inspiring for young people to see themselves in an elected leader, and it is one of the many reasons I believe strongly that representation matters.

Your voice and your vote can make a difference. There are places in this country where Native votes can turn the tables and drive our country toward progress.

The strides we’re taking for Native people at all levels of government can and will be slowed down if we don’t use the power of our votes to make our voices heard.

I encourage everyone to learn about the candidates on the ballot, reach out to your election officials, and vote in the upcoming elections.