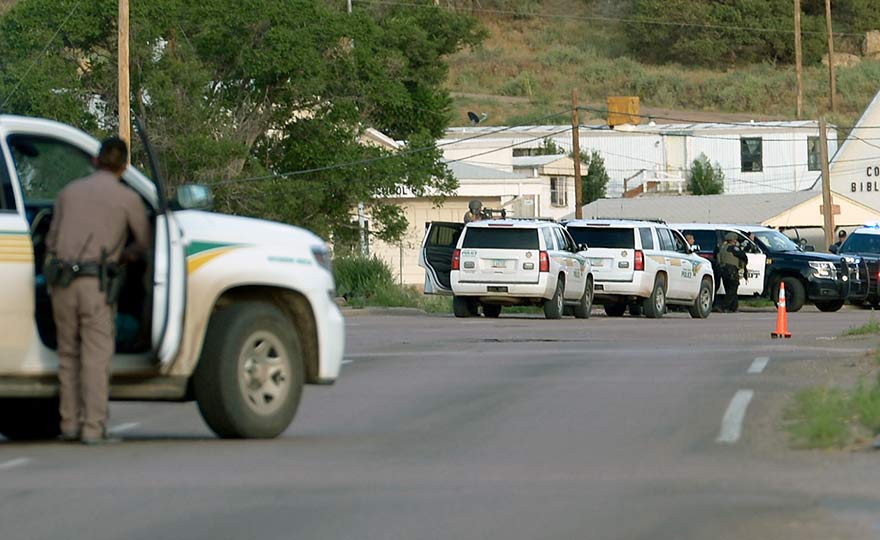 Navajo Times | Donovan Quintero A Navajo Police Officer looks on as other police officers negotiate with an armed man who was allegedly involved in a police chase on Sunday. The chase ended in Tse Bonito where Navajo Nation Police Chief Phillip Francisco said the man threatened to shoot a propane tank.

An man suspected of robbing the Chevron convenience store in Window Rock at gunpoint led police on wild chase on Sunday afternoon.

Randall Redhair, 34, from Window Rock, identified by the McKinley County Sheriff’s Office, allegedly armed with a rifle and a “banana clip,” is accused of the robbery.

According to Christina Tsosie, spokesperson for the Window Rock District, dispatch received a call at 3:52 p.m. about a robbery in progress.

Police began pursuing Redhair when he failed to stop despite their emergency lights and sirens. He took police through St. Michaels Housing and by Lowes grocery store several times before speeding off on State Highway 264 and stopping at the car wash in Tse Bonito where he fled on foot and hid underneath a large propane tank.

Tsosie said he crawled underneath the propane tank where he began threatening to shoot the tank. She added Redhair pointed his weapon – which was an air rifle wrapped in a blanket, as written by McKinley County Sherriff’s Capt. James Maiorano III – at police several times.

At 6:43 p.m. during the three-hour standoff, a Navajo Police officer discharged a duty weapon at the robbery suspect. Tsosie said the officer fired at the man “for officer safety.”

Both lanes of the highway were closed in both directions and businesses and customers were evacuated from the area as police dealt with Redhair.

Navajo Police called the McKinley County Sheriff’s Office for assistance since Tse Bonito is within their jurisdiction. Officers from the New Mexico State Police also responded.

Several heavily armed deputies from McKinley County were seen approaching the man. He was arrested without incident at 7:28 p.m.

Tsosie said the officer who fired their weapon at the suspect was placed on administrative leave pending an investigation from the department’s Internal Affairs office.

Maiorano stated Redhair would not comply with the deputies and fired the air rifle in the vicinity of the deputies. Officers used a Taser to subdue him.

He was arrested for aggravated assault upon a peace officer, a third-degree felony, and booked into the McKinley County Adult Detention Center in Gallup.

No injuries were reported. Both the Navajo Police Department and the McKinley County Sheriff’s Office are continuing to investigate the incident.