Genevieve H. Tso’s family never left her side when she tested positive for the coronavirus last Thursday.

Even though stress immediately followed her diagnosis, her husband and her adult children reassured her, “It’s OK, we’re going to fight this together.” 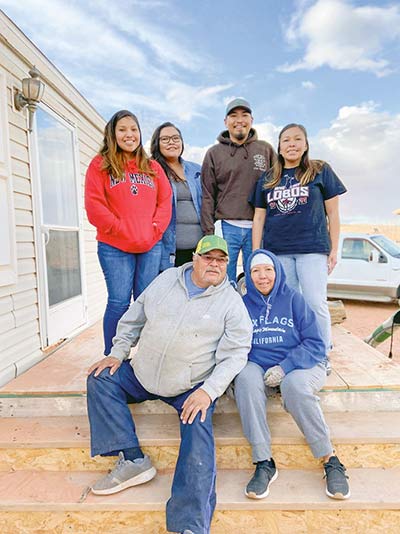 Genevieve, 60, was sick for two days before she began experiencing body aches. Her daughters said she started running a fever last Wednesday, March 25. Her first symptoms appeared around March 18 or 19. “My bones were aching, and I got really weak,” said Genevieve, an educator with 30 years of experience and no underlying medical conditions, as she coughed in an interview alongside her family on Saturday afternoon.

“I wasn’t coughing as much,” she said. “But now, since I’m kind of getting over it to where I’m coughing more. And my fever is at a normal level now.” Although still weak, Genevieve on Saturday went outside to help her daughter feed her family’s livestock and then sat outside. “I’m still really weak,” she said. “I take a walk and then I have to take a break. I kept on walking until I got close to the horses.”

Genevieve said she may have contracted the virus that causes COVID-19 from a relative who took part in the March 7 Chilchinbeto Church of the Nazarene rally. That meeting is suspected of spreading the coronavirus in Western Navajo. Chilchinbeto is located about 33 miles southwest of here.

“We, as a family, coming forward, we want to create public awareness,” said Tovarai Tso Tenorio, Genevieve’s eldest daughter. “We want people to understand why ‘shelter in place’ is so important,” added Teesa R. Tso, Genevieve’s second eldest daughter who’s a medical assistant by trade. “We’re advocating for people to stay home as much as they can and not travel to different areas on the (Navajo Nation) and just stay home.”

Both Tovarai and Teesa, along with their father Paul H. Tso, 64, their youngest sister Urbina and brother Haskan, all tested negative for the coronavirus on Sunday, March 29.

After Genevieve was told by her physician that she had the coronavirus, Tovarai, Teesa, Haskan and Urbina took her home and isolated her in a room with a private bathroom and a private entrance.

The siblings then went to extreme measures to keep their parents’ home clean and sanitized. “When my mom came back (from COVID-19 testing) on March 25 – that was kind of her area of when she got really sick – the fevers and the coughing pretty much increased around that time,” Teesa said. “We siblings came together and talked about how she needs to go in and it’s really important.

“So we had her go in on the 25th and doctors told her, ‘Go home and self-isolate, drink lots of fluids and monitor your temperature,’” Teesa said. “We’ve been managing to have her do that pretty well. She’s been noting those things down every six hours.”

Teesa said she received a call at work regarding her mother’s test results the next day, March 26. She met with a physician and a nurse who told Genevieve she tested positive. “When she got the news, she was pretty scared,” Teesa said. “I took the rest of the week off to come home and be with her and to get everything settled into place.”

Teesa and her siblings moved Paul from the bedroom he shared with Genevieve into another room – something that was hard for him to do because they’ve shared a bedroom for decades. “She’s been doing really well with that,” Teesa said. “She stays in the (the room) and we open the windows here and there, and the back doors so air can circulate for her. It does get pretty stuffy in her little room.”

Teesa said her mother has her own eating utensils, which are kept separated from other dishes. “We’re trying to keep things clean as possible,” she said. “We clean daily. We do a deep clean at least three times a day. And then we continue to wipe down door handles. Anything that she comes in contact with we wipe down. We use a lot of Clorox; we use a lot of disinfectant sprays.”

Genevieve said when her first symptoms appeared in mid-March, she noticed a slight fever and then later a cough. “Eventually on the 25th, that’s when it got pretty severe,” Teesa said. “Her body started to get really weak. She couldn’t sit for very long or be up and about very long. She had a hard time getting in and out of bed for a while. So, we’re getting past that now.”

As coronavirus cases expand across the Nation, there is angst and anxiety as Diné face the new uncertainty. Is Genevieve and her family afraid? Like almost everyone, yes, along with the litany of, “Why our mom? Why us?” and “What have we done? What did we do bad?”

“The media shares nothing but the negative every time,” Teesa said. “You know, going into it, it was just a lot of uncertainty when we got the phone call. It made our hearts heavy. In reality, it’s a pandemic. It’s something that’s real that’s going from home to home. There’s no telling who the next person is.”

Teesa said while it can be difficult to see the positive in anything, there is something positive to be gained. For Genevieve’s family, it was, simply, family unity. “It’s OK, we’re going to fight it together,” is what Paul and his children told Genevieve.

“With that, it really made us think about it and say, ‘People need to be aware that shelter in place is important,’” Teesa said. “And it’s really important to know that it’s not targeted to people who are not clean or clean. People like celebrities are obtaining these things.

“My mom, it did send her into a panic attack. Within that (first) 12 hours, she was just so worried and bombarded … that it really put her into a bad spot to where she started feeling the tightness in her chest – having a panic attack or an anxiety,” she said.

Patients with confirmed coronavirus infection have reportedly had mild to severe respiratory illness with symptoms of fever, cough, and shortness of breath, according to the Centers for Disease Control and Prevention. “That’s where my mom wants to come forward,” Teesa said. “That’s where she wants to let you know that, the range of symptoms, it’s like a deck of cards. It’s not going to show up the way it does. Some of them are completely different.”

Teesa said her family have been receiving calls about people who have also tested positive, all of whom are scared and don’t know how to handle it. “And we’re trying to bring comfort to them as well,” she said. One way the siblings are doing that for their mother is through words of comfort and helping set her mind at rest, telling her that “the media exaggerates negative news.”

“We talk to her every day,” Tovarai said. “My sister (Teesa) tells her to turn off the TV, shut off your phone. We appreciate the phone calls, but we have to shut it off because in the Navajo way, there’s a lot of jinni. “In fact, we’re already hearing our mom’s in the hospital in New Mexico,” she said, “when, really, she’s not.”

Tovarai said she and her siblings announced to the Dennehotso community that their family had been impacted by COVID-19 only to educate – because her mother is an educator. “We’re going to keep you guys informed what we’re doing as a family,” Tovarai said, “to make us feel better, to make you feel better, to know that you can beat this regardless of what media says. Regardless of what the people are telling you through jiní.

“We’re Navajo, we’ve come far enough to beat it. And that’s what we’re trying to bring to everybody – comfort, knowing that we’re going to get through it. Everybody is. We’re just going to try to fight it together as a community.”

Genevieve’s family is traditional, and they follow the ways of tádídíín, corn pollen. “And for us, we’re using all remedies as possible, as far as herbs,” Teesa said, “and we had prayers done for us. We’ve been accepting all religions through their prayers and church.”

“We’ve been using a lot of (ch’il azee’),” Tovarai said. “People have been mentioning sage (ts’ah), yucca (tsá’ászi’), and burning cedar (gad ni’eełí). We’ve done quite a few of those.”

Tovarai and Teesa said the ch’il azee’ have alleviated some the pain and the psychological burden on their family.

“Maybe it’s because it’s something our ancestors have done before,” Tovarai explained. “It only makes you feel stronger toward the fight that you’re fighting.”

“Don’t be ashamed if you obtain the coronavirus,” Teesa added. “Be mindful of others. It’s better to tell the truth and let people know what you’re going through and that they’re well-aware that you tested positive.
“And we totally understand,” she said. “We totally get shelter in place is hard because some of us have children. They need milk, they need their food. But at the same time, you’ve to understand, if you’re positive, just be honest and let your family and friends know because they have a heart.”

Tovarai said she and her family want to thank all those who have come forward and talked about contracting the coronavirus.

“Thank you for spreading awareness and continuing to advocate for shelter in place,” she said. “Thank you to all those who have helped us so far — that have been there for us, prayed for us. We want to say thank you.”

Tovarai said her mom is doing a lot better as of March 30.

Tovarai on Wednesday morning said her mother is doing good and walking around.

“She felt a difference yesterday,” she said. “We are on day 14 since (the) first symptoms, which is a good sign with no hospital admission.”

“We are sticking by our Navajo traditional ways and we strongly believe in ‘naayéé’ sisiih,’” Paul added.