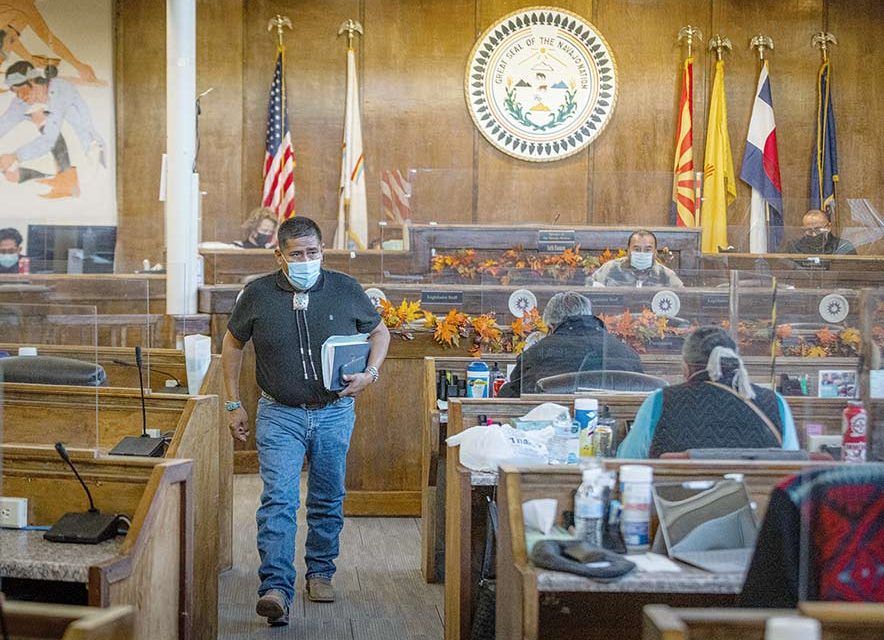 The 24th Navajo Nation Council sputtered and whined before choosing who the interim speaker would be.

Council Delegate Otto Tso was controversially elected on Wednesday to become interim speaker of the Council.

Delegate Jamie Henio and Tso were chosen from a body of seven nominees. After they gave their speeches, delegates cast their ballots. After about 10 minutes, they split the votes, 11-11, with Delegate Amber Crotty not voting.

Henio said he would step down as a candidate because he has elderly parents and livestock he needed to return to.

“I respectfully have to say I’ll step back,” he said.

Crotty chimed in and said she decided to vote and felt violated because the chief counsel was involved. She added she cast her vote but did not indicate who she voted for.

Henio then added his comments and said he stepped back.

Tso, who represents Tónaneesdizí, said the Council still has unfinished business they needed to complete before the incoming Council officially takes over in mid-January.

“I am only here to finish out the remaining Council,” Tso said, who spoke only in Navajo.

He added many of the delegates still had projects that were not yet completed.

Tso will retain his seat and move onto the 25th Navajo Nation Council after defeating Angie Williams by an unofficial vote, 937 votes to 552 votes. The Law and Order Committee member recently got involved in a controversy when he put his name on legislation that would have placed Seth Damon on unpaid administrative leave.

Damon, who ran unopposed and was reelected to represent Bááhááli, Chéch’iltah, Tsé łichíí, Rock Springs, Tsayatoh, and Kin’hózhóní, was caught in a compromising position during the Indian National Finals Rodeo which was held from Oct.18-22, in Las Vegas, Nevada.

Damon admitted to being intoxicated. He was photographed at the South Point Casino and Resort. While he publicly went on record and gave a statement stating he went to the INFR on a “private vacation,” it was confirmed by the Navajo Times that Damon attended the Navajo Community Development Financial Institution as speaker of the Council, which was held at the Southpoint Casino.

The photograph depicts Damon sitting at a slot machine, and he confirmed he was intoxicated when it was taken. The person who took the photo remains unknown.

Damon authored the legislation Tso signed, which was nulled when Damon said he would resign as speaker of the Council.

He reiterated what Tso said, saying the current Council body needed to prepare for a transition.

“We will try and get the Council ready for the next Council,” Henio said. “We will get them ready. After that, it’ll be on them.”