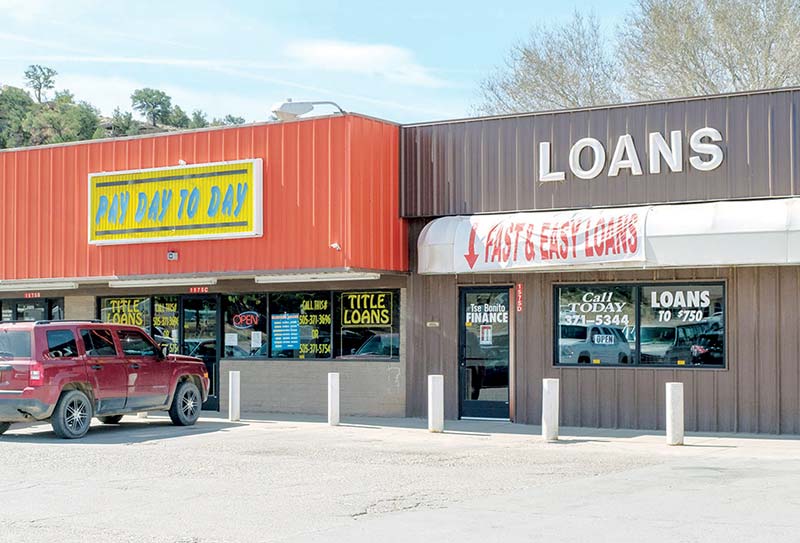 Shop around for payday loans – or use bank, credit union

In the late 90s, the biggest issue with credit was how inaccessible it was to communities of color and low-income families, according to an article published by the American Bar Association.

Just a few years later, in 2005, the issue would shift: Credit became too assessable.

“Today, because of advances in technology and changes in the marketplace, many in these same populations are bombarded with offers from subprime mortgage lenders, check cashers, payday lenders, and other fringe bankers,” Nikitra Bailey, vice president of the Center for Responsible Lending, stated in her article. “Credit in the United States is now more widely available than ever before. Yet this expansion has been accompanied by a sharp rise in predatory lending.”

Border towns near the reservation are riddled with small lending companies that offer loans at high interest rates.

For example, Tse Bonito, a small community on the New Mexico-Arizona border with a population of 180, is home to two small loan companies. Gallup has over 20 of them and Farmington is nearly the same way according to Cassie Fleming, an attorney for New Mexico Legal Aid.

“McKinley County has the highest number of small loans per county compared to the rest of New Mexico,” Fleming said. “That means there’s a lot of money flowing from our residents here in McKinley Country to the small lenders’ bank accounts.”

One of the goals of the workshop: “How to get off, what we call, the small loan treadmill and to stay off it if you’re not yet on it,” Fleming said.

New Mexico defines small loans as anything less than $5,000.