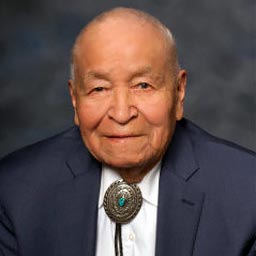 Pinto, who passed away May 24, was elected as senator for District 3 of New Mexico in 1977 and has held that position since then, making him the longest serving member of the Senate in New Mexico.

In order to continue Pinto’s legacy and strong advocacy to “enhance” the lives of the Navajo people, Resource and Development Committee member Mark Freeland sponsored the emergency bill to make certain the person to replace Pinto is Navajo.

Freeland said the county commission of District 3, which includes McKinley and San Juan counties, are the ones who make the recommendation of who they want to see replace Pinto. But Freeland said this resolution is just to “send a message” of who they hope to see take the seat.

“We lost a true warrior advocate,” said Freeland. “He’s irreplaceable but his legacy carries on.”

Delegate Amber Kanazbah Crotty said Pinto did talk about whom he believed should replace him if he were to step down or vacate his seat, and that was his granddaughter Shannon Pinto.

“I know Senator Pinto asked me to support his granddaughter Shannon Pinto,” said Crotty.”We should confer with his family on what was senator’s wishes or plans. He was a keen and noble leader. He discussed openly transition to what his projects were, and he was mentoring individuals to be in those positions.”

Crotty said she is concerned with the individuals that feel they are entitled or should replace Pinto. She also said his constituents should also be apart of this conversation.

At Shiprock Chapter’s planning meeting Wednesday it was reported there were three nominations for the late senator’s replacement and they are: Dineh Benally, Janene Yazzie and Shannon Pinto.

On Sunday, the chapter will vote on their choice and send it to Grisham.