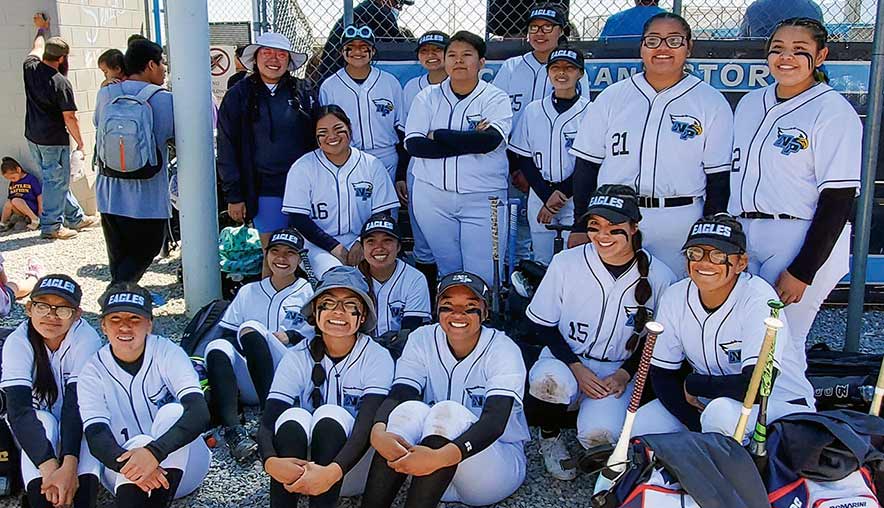 Courtesy photo | Darwyn Henderson
The Navajo Prep softball team pose for a picture during the Class 3A state softball tournament on Wednesday, May 11 at Cleveland High School in Rio Rancho, New Mexico.

It was a tale of two seasons for the Navajo Prep softball team.

That is how second-year coach Darwyn Henderson summed up the year as the Lady Eagles finished with a 15-15 overall record and a 9-1 mark in District 1-3A play.

As a state playoff team, Navajo Prep ended a 30-year drought by winning its first round game at the New Mexico Class 3A state tournament on May 11.

“The first half of the season we had a lot of youth, and we were playing 4A and 5A schools, so we took our lumps,” Henderson said. “It was good for the young players. They got some experience real fast, but they played against a lot of speed and higher level of competition.”

By mid-March, the team gained a few seasoned players at the conclusion of the winter basketball season.

“That really solidified our roster because we had a wealth of experience with those players returning,” Henderson said of seniors Amber Garcia, Alexis Sandoval and Breanna Lewis, and sophomores Kambreya Dinae and Aniya Johnson.

Henderson said Johnson brought her bat and speed even though she didn’t play for the team last season.

“She played on some club teams in Farmington, so she had experience,” he said of his third baseman.

As for his three seniors, Garcia and Sandoval played in the outfield while Lewis caught for the team.

“They played for us last season, so we had a lot of leadership on the team,” he said.

Dinae, meanwhile, played an instrumental role inside the circle as she gave up 56 runs on 76 hits in 20 games played. In 86 innings pitched, she fanned 153 batters and allowed 47 walks.

“Kambreya really buckled down and got us through the whole district,” Henderson said, while noting the only blemish they had in league play was a forfeit to Zuni during its last regular season game.

Henderson said his squad exceeded the 26 game limit set by the New Mexico Activities Association, so after shutting out Zuni 13-0 they dropped the nightcap with a forfeit.

“We played in two tournaments and that put us over,” he said. “Sometimes you don’t know how many games you’re gonna get, so we played like three and four additional games, so that put us over the edge.”

Nonetheless, the Henderson-coached team captured the district title for the second straight year despite finishing with an identical 9-1 mark with Zuni. The Eagles won the tie-breaker based on runs allowed.

For the playoffs, Navajo Prep was awarded the No. 7 seed and they played No. 10 Santa Fe St. Michael’s in the single elimination play-in game.

The Eagles plated two runs in the fourth and held onto a 3-1 win to send Navajo Prep into the next round that featured a double-elimination format.

“It’s been a while since we won a playoff game,” Henderson said. “In 1992, they made the finals and they lost to Loving. Since then, they’ve been to state, but they haven’t gone that far.”

Against St. Michael’s, the Eagles pounded out 12 hits with Johnson, Sandoval and Lewis coming up with three hits each.

“It was close,” Henderson said of their first round game with St Michael’s. “They had a good pitcher, and it was a good game.”

The Navajo Prep coach said St. Michael’s was one of five teams that made the playoffs from District 2-3A.

“They come from the toughest district,” he said. “All five of their teams made state, so they were pretty good.”

After prevailing 3-1, Henderson said his club was given a 30-minute break before they matched up with No. 2 Cobre. As one of the higher seeded teams, Cobre got a first-round bye.

“They were fresh, and we weren’t,” Henderson said as Cobre sent the Eagles to the elimination bracket with a 16-1 win.

“We gave up some early runs, and then we settled down,” he said. “We couldn’t capitalize on some situations. We had two (runners) on with two outs. We just couldn’t get a clutch hit that we needed.”

Henderson said they had two other innings like that with runners in scoring position.

“I think we just got tired,” he said.

Following that game, Navajo Prep played No. 6 West Las Vegas as they were on the wrong end of a 10-6 decision.

“We were looking for a little revenge because they ended our season last year,” Henderson said. “Again, we played them tough, but overall it was fatigue. We were out in the sun, out in the wind the whole day, and we played three games that day.”

To make a deep run in the playoffs, Henderson believes a state championship team needs multiple pitchers to do that. And although he tried to develop his pitching staff they were young and inexperienced.

“We had others try, but they were not getting it across consistently,” he said. “They were giving up walks, and you just can’t have that.”

Next season, Navajo Prep is expected to return Alexis Wauneka in the circle for her junior season as she had ACL surgery on the first day of spring practice.

“We’ll have a 1-2 punch,” Henderson said of Wauneka and Dinae.

And with 15 players coming back, the second-year coach is feeling optimistic about next season.