Winslow comes up short in 3A title game 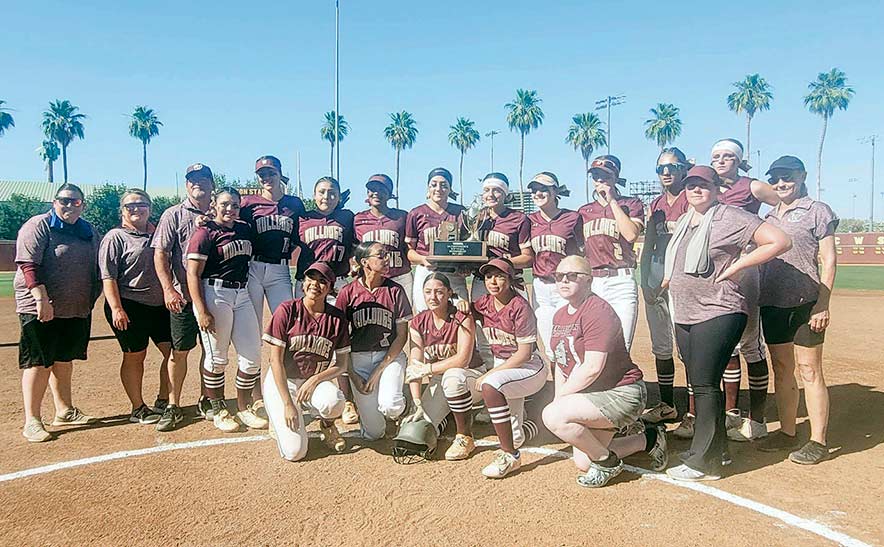 Navajo Times | David Smith The Winslow Lady Bulldogs ended their softball season as the reserve champions in the 3A Conference. The Bulldogs came up short to Tucson Sabino in an 8-0 affair.

The Lady Bulldogs worked its way up the brackets in the state 3A softball tournament.

The Bulldogs made it to Phoenix as it battled for the state title. Winslow was seeded as No. 2 in the division as it faced the No. 1 Sabino Lady Sabercats.

Despite significant efforts from Winslow, Sabino took the title, defeating the Lady Bulldogs 8-0.

Winslow Coach Megan Lymer said it was a challenging game, but the girls did their best.

“We played our hearts out,” Lymer said. “The girls still played great; at the end of the day, they (Sabino) had a really good pitcher, we didn’t get any hits in the last inning, and that’ll do it for you.”

The Lady Bulldogs started its journey to the finals by defeating Safford High the week before 6-1. The team faced Bourgade Catholic, where it pulled another win 8-7; and another close win against Northwest Christian with 8-7 again, which propelled them to the finals at Alberta B. Farrington Softball Stadium – home of the Arizona State Sun Devils’ softball team.

The Lady Bulldogs started the game determined, but the Lady Sabercats were ready. In its first inning, Sabino quickly struck out Winslow before taking up the bat, where its strong batting got them to take positions.

Senior Lady Bulldog Mykenzie Flores pitched through the whole game. Even when Sabino was ahead, she remained calm and kept throwing fastballs.

She gave up base hits, but she made three strikeouts, all the way to her last pitch in the sixth inning.

“I knew I had to go in with a strong mindset knowing that they’re going to hit and we’re just going to have to make play,” Flores said. “It was hard. It was hard fighting the sun (as it got in my eye), but I just tried to ignore it the best I could and just pitch my game the best I could.”

Sabino scored in the first inning and again in the fourth. Winslow’s defense was able to hold them at bay through most of the game, but Sabino entered a hot streak in the sixth inning.

Doubles and a home run

Blazing through the gates, Sabino began hitting doubles and hitting a home run, hitting the balls low and across the field and making it difficult for Winslow to catch while the Lady Sabercats discreetly stole bases.

By the end of the inning, Sabino scored six points, securing the lead of 8-0.

Although the score was devastating, Lymer encouraged her girls to keep their heads high.

“It’s been an amazing season, and we told the girls out on the field just now that second place is nothing to be ashamed of,” Lymer said.

Despite the stiff competition, Flores congratulates her team for making it this far.

“I honestly knew that we were going to make it here this year,” Flores said. “And I knew that my team was behind me through the whole season and just making it here was a huge accomplishment for everybody, and I think they should all be proud of themselves.”

Flores said this had been a great season; they were No. 1 in their region, won a ton of awards, and had terrific plays.

One of her most prominent highlights of this season was the team executing a triple play during its games, signifying its bond and skill.

She commends Brinleigh Arredondo for her hard-hitting, which helped Jaylynn Sharp advance on the bases. Andrea Guzman, who made a diving catch during the game, raised morale and cheers from the Winslow crowd.

“Everybody should feel really good about themselves right now because it’s been four years since we’ve been here. Maybe next year they’ll be champions,” Flores said.

For this season, the Lady Bulldogs finished at 26-8 overall, including a 10-win streak. The team finishes as No. 1 in the 3A East and No. 2 in the state.