The Farmington girls’ basketball team missed its first nine shots from beyond the three-point line on Saturday night. 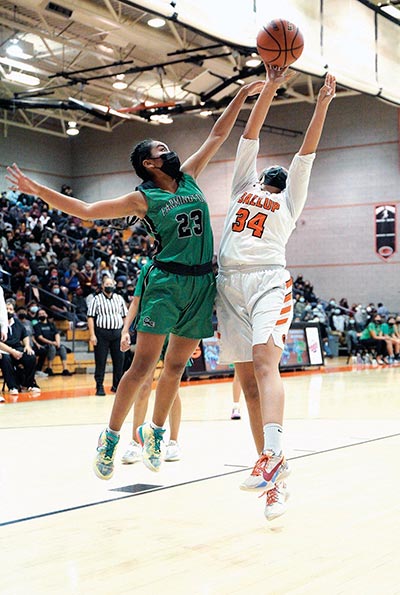 The Lady Scorps had some good looks at the basket but their shots missed its mark. As a team Farmington put up 26 treys and they made five in its season opener against Gallup.

“I’m just glad to see our girls shoot,” Farmington coach Larenson Henderson said. “We didn’t shoot very well tonight but once they start to fall, man, I think we’re going to be tough to beat because we can move the ball just as fast as any other team.”

The Henderson-coached team used its speed and athleticism to post a 57-46 win over the defending 4A state champs before a large crowd at Gallup High.

“I love the environment,” Henderson said. “It’s awesome to have all these fans out here. Last year with COVID we played a couple of games without fans.”

The Farmington team stayed resilient even though they trailed 7-2 during its early shooting slump.

The Scorps tied the game at 11-all after one quarter of play and they took the lead for good on a 17-4 run at the tail end of the first half.

Senior Kiiyani Anitielu pumped in eight of her game-high 22 points during that spurt as Farmington erased a four-point deficit and led 33-24 at the break.

“She’s a heck of a player,” Gallup coach Todd McBroom said of Anitielu. “She can do a lot of stuff.”

In the second half, Farmington stretched its lead to as much as 10 points in the middle of the third.

The Bengals, however, were not going away as they cut that margin to 45-40 heading into the fourth with senior Jordan Joe scoring six of her 11 points.

The Lady Bengals had an opportunity to close that gap to a one-possession game but the two attempts they had near the basket hung on the rim to no avail just as time expired.

“It’s one of those nights to where it seemed like we couldn’t finish the easy ones,” McBroom said. “We had some easy ones in the lane. Its shot that I feel we should make (but) the ball just didn’t bounce tonight.”

McBroom also pointed out that his team made only 4-of-24 shots at the three-point line.

“We had some wide open threes, we just missed them,” he said.

A big concern for the fifth-year Gallup coach was the effort on the glass.

“They kicked us on the boards,” he said. “We got to rebound better. I mean, when they get three, four opportunities in a possession it makes it hard, especially when you’re playing quality opponent that shoots it as well as they do.”

“We got into the passing lanes,” Henderson said. “We try to get at least a fingernail on the ball and that changes the trajectory on it. We recovered a few tonight, so we did a really good job at that today.”

In the fourth, Farmington outscored the Bengals 12 to 6 to end Gallup’s modest 10-game win streak, which dates back to last season.

The Bengals had three players in double figures with Hailey Long and Jordan Joe finishing with 11 each while Michaela McCurtain added 10.

For the Scorps, Kiiyani Anitielu scored 22 while younger sister Kamalani had 10.

Despite coming up short, McBroom said they want to play tough competition to get ready for the postseason.

“Preseason is all about seeing good people,” he said, while adding that Farmington is a top 4 team in 5A. “It makes you better even when you don’t win sometimes. I felt that we had chances to win tonight but we couldn’t get over the hump.”

Henderson said playing Gallup for its season opener also bodes well for his squad as the Scorps are looking to make the Class 5A state playoffs next spring.

Last season, the Scorps were the odd team out when the playoffs was whittled down to eight teams during the abbreviated season.

“We had a caliber team last year and we were right there,” he said of making the field. “It should have been us in the state tournament but we lost our bid.

“If we got the No. 8 spot I think we could have knocked somebody off,” he said. “Hopefully this year we’ll make a statement. We got to earn that respect, so we got to work at it to get there.”