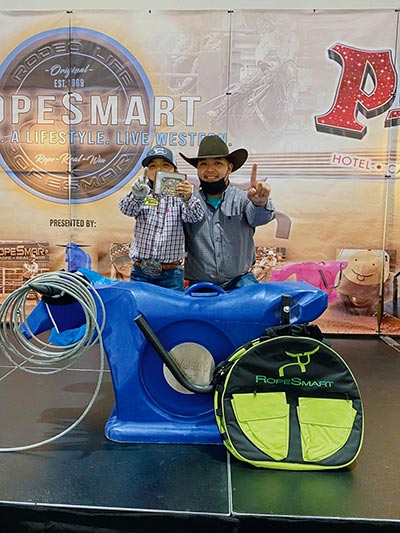 Submitted
Klay Tohsonii was a double winner in Las Vegas, capturing two world titles in dummy roping. He is pictured here with his dad Nick Tohsonii.

Klay has always been interested in roping, said his parents. Most of his family are rodeo athletes and he and the other kids of the family are already following in their footsteps.

Klay is a very energetic boy who enjoys playing basketball, golfing, roping, going fishing, hunting, and riding horses. His father, Nick Tohsonii, always took his son out and do these activities together.

“He (Klay) shows that all the hard work truly paid off and when everybody, like the local community and even the Navajo Nation president recognizes him, it’s just a bonus,” Nick said. “But I’m very happy and hopefully he’ll continue down the road with more success.”

Klay’s mother, Chassity Benward, said she is proud of her son for not only having so many hobbies but also for doing well in school. She said Klay asks his teachers lots of questions and gets along well with his fellow students.

He was 4 years old when he started entering competitions and showing his talent for roping, winning multiple prizes in the past two years.

The kindergartner has traveled to six different states for competition and is also the current titleholder for the INFR 2021 Kids Dummy Roping Championship.

“What I like about roping are the kids, talking and competing and the challenges and having fun,” Klay said.

The past year was difficult for him when the COVID-19 pandemic struck and deeply affected the family.

All competitions were canceled, and he was left asking when the competition would start again. He missed roping and seeing his friends. He was very happy when school and competitions started. He was excited to rope again, especially when he went to the world championships.

On Dec. 9, Klay competed against many opponents in the Stetson Country Christmas World Championship. He hung in there until his last throw, roping his target 13 feet away and winning the title.

He won a custom headstall and a beast collar, a saddle pad, a classic rope bag, a smarty dummy, and a personalized trophy buckle.

A few days later, he was in the 2021 Rope Smart Championship. This time he roped his target at 10-feet of distance and won the title on Dec. 11. He won another rope bag, ropes, gift certificates, a RopeSmart dummy, a world championship saddle, and a second custom buckle.

“He has come a long way from practicing, being committed, being dedicated,” Benward said, “all his hard work has paid off and he’s still going.

“His gift is God’s talent and we’re blessed to have him,” she said.

Benward encourages other mothers across the Navajo Nation to be supportive of their children as that support can lay the foundation for their children’s future success.

After witnessing all that was a loss in the past year of COVID, opportunity, and loved ones, she stresses that family is more important than ever.

“I feel like we should reflect on these complicated years and really be supportive of one another and love one another, especially our children,” Benward said. “They grow up so fast and before you know it, they’re out of the house and on their own.

“I love Klay and my daughter Ensley, and I’d do anything for them no matter how much it costs, how far it is or how challenging it is,” she added. “As a mother, I’ll do anything for my children. Having their backs and giving them the support they need.”

Nick is proud of how far his son has come and hopes it will have a lasting impact.

“For young kids,” Nick said. “I truly would like Klay to inspire the young kids so that they see anything is possible if you put in the hard work and the dedication and see how far you can go.”

Klay is already getting ready for his next competition on Jan. 1, 2022, and he’s looking forward to more fun and meeting new potential friends in the coming new year.