The pressure of being high callback at this year’s Indian National Final Rodeo didn’t seem to faze event leaders.

Of the eight open events, seven of those leaders were crowned champions on Saturday night at the South Point Equestrian Center in Las Vegas, Nevada. 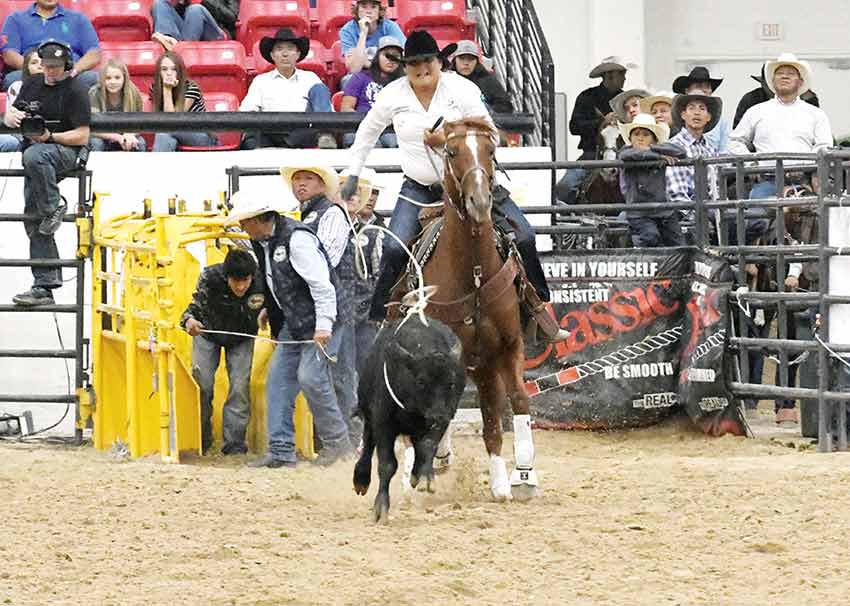 File Photo | SMITH RODEO PHOTOS
Gilbert, Arizona cowgirl Danielle Lowman posted the fastest run of 2.50 seconds in the opening round of the ladies breakaway roping on in 2018 at the 43rd Annual Indian National Finals Rodeo in Las Vegas, Nevada.

Gilbert, Arizona, cowgirl Danielle Lowman was one of those leaders who stayed relaxed and poised despite getting a formidable challenge from fellow Diné roper Bailey Bates in the ladies’ breakaway roping.

As the second callback, Bates posted a 2.10 run in the last performance of the INFR, which gave her a 9.36 aggregate on four runs.

Lowman, who led Bates by 1.29 seconds heading into the final round, smoothly roped her final draw in 2.33 seconds to give the Gilbert cowgirl her first INFR win.

“I knew Bailey was going to do her job just because she’s a former world champ,” Lowman said. “I expected that out of her, but I knew that if I did my job and rope aggressive and be on that barrier, I had a shot.”

That final effort sealed the deal for Lowman as she roped four draws in 8.30 seconds, which included a mind-boggling 1.70 run in the second round.

“That calf was really, really good,” Lowman said. “It came out straight so I was thinking like I could be 1-something if I get on that barrier.”

In team roping, Erich Rogers and Aaron Tsinigine ran the tables and won the world title by roping four steers in 19.83 seconds, beating out the second-place team of Dennis Begay and Hiyo Yazzie, who finished with a 24.38 aggregate.

In the final round, the Rogers/Tsinigine duo registered a debatable first-place run of 3.55 seconds on Saturday night.

Despite that controversial finish, Tsinigine said his partner did a good job of turning steers all week.

“All I had to do was my job, and he made it easy on me,” the Tuba City roper said.

“Aaron roped good all week and it was just fun,” Rogers chimed in. “I’m just so lucky and blessed to be back here and have fun hanging out with my people and friends throughout Indian Country. So it was pretty cool.”

Coupled with his second-place finish in the tie-down event Rogers also claimed the men’s all-around.

“It’s the greatest feeling in the world to have the all-around championship,” he said. “Just to have a good year at the Indian finals is awesome. To be the reserve champion in the calf roping and to win the team roping is a great feeling. It was a successful year for us this year.”

The women’s all-around went to Kassidy Dennison who placed seventh in the barrel racing and 10th in the breakaway aggregate races.