The competition is ‘gonna be tough’: Diné ropers saddling up for NFR 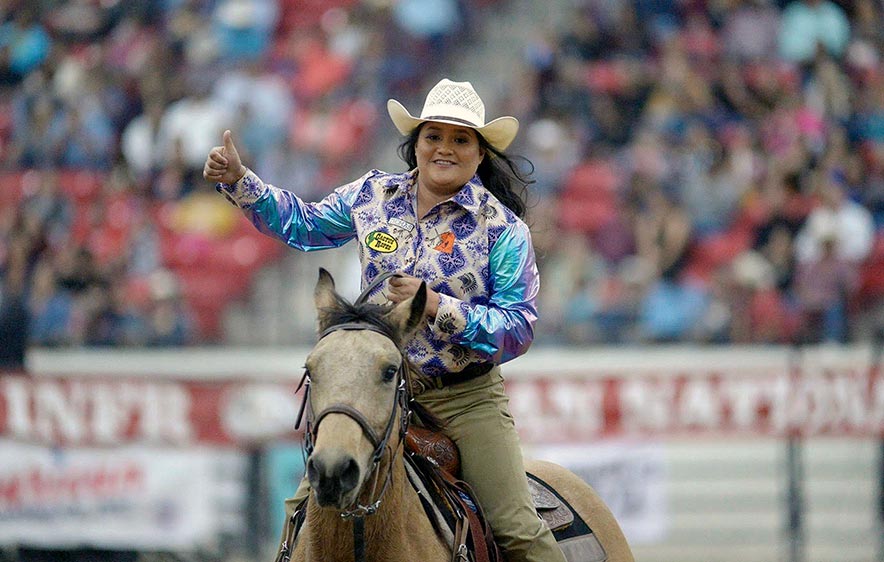 File photo
Gilbert, Arizona cowgirl Danielle Lowman qualified for her first Wrangler National Finals Rodeo in the breakaway event. She is currently ranked No. 8 in the world.

Making the Wrangler National Finals Rodeo is nothing new for Erich Rogers and Derrick Begay.

The two Diné team ropers have qualified a combined 20 times with Rogers making his 11th straight trip to the NFR.

“This is something that I’ve worked hard for,” said Lowman, who is currently ranked No. 8 in the world with $34,843 won in the Women’s Professional Rodeo Association.

“I feel very fortunate to go up and down the road with these ladies,” she said. “This is something that I always wanted to do and the more I kept going, the more I got confident in my roping because you learn by just watching what they do.”

Lowman said she’s picked up a lot in her two years on the circuit by learning from ropers like Kelsie Chace and Jackie Crawford with the latter being rodeo’s most esteemed cowgirl.

“At first it was kind of overwhelming to ask them questions but once you warm up to them it got easier to be around them,” she said. “They have a lot of knowledge and I wanted to learn from the best.

“I just feel very blessed because being around them has helped my roping so much,” she said. “My roping has changed in the last two years.”

Lowman said she’s dedicating her NFR debut to her late father and grandmother. Her dad, Ernie Lowman, passed away in 2013 while her grandmother Frieda J. Alex died last year due to COVID-19 complications.

And now that she’s made the NFR, Lowman said she’s feeling very emotional of not having her grandmother there to watch her.

“It’s a little sad for me because she is not here to celebrate with me,” Lowman said. “Now I just gotta push forward and make her proud up there in heaven. I have to go rope for my grandma and my father because they basically made me see where I could go.

“I want to go in there and do the best that I can and hopefully it works out in my favor,” she added.

As the No. 2 team-roping header in the world, Rogers is also hoping to have things fall his way during the NFR that starts on Thursday and ends on Dec. 11 at the Thomas & Mack Center.

Last year the two ropers won the average race when they were a perfect 10 for 10 at the 2020 NFR, which was held in Fort Worth, Texas, due to COVID-19 restrictions in the state of Nevada.

“We’re just lucky and blessed to have had a great year,” Rogers said. “Hopefully when we get to Vegas we can capitalize and try to do good.”

And while they were able to rope all 10 of their draws last year, Rogers suggested that’s easier said than done.

“It’s hard regardless,” Rogers said. “It’s 10 steers in 10 nights. You just have to take it one run at a time and that’s what I have my mindset on.”

Begay is taking that same approach as he is teamed up with Washington cowboy Brady Minor. Both cowboys had to find new partners for the NFR since their regular season partners did not make the top 15 in the PRCA world standings.

“Everybody knows the competition is gonna be tough,” he added. “But if you just rope the way you do and do your own job the rest will take care of itself. That’s kind of how I’m going about it.”

With that, Begay is roping with Minor, who comes in at No. 14 in the world.

“He’s a good partner,” Begay said. “He’s been there and done that. He knows all the ins and outs about rodeo, so he’s pretty smart with his rope. Everything I turn for him, I know he’s gonna catch two feet.”

And while this is his ninth qualification, this is Begay’s first one back since 2018.

“I’m glad to be back,” he said. “This is exciting but I’m getting closer to ending my career. I like to be home more but I’m just very appreciative that I’m back here in Vegas.

“I’m gonna do the best I can, and I’m gonna try to have fun,” he said. We’ll just see what happens.”