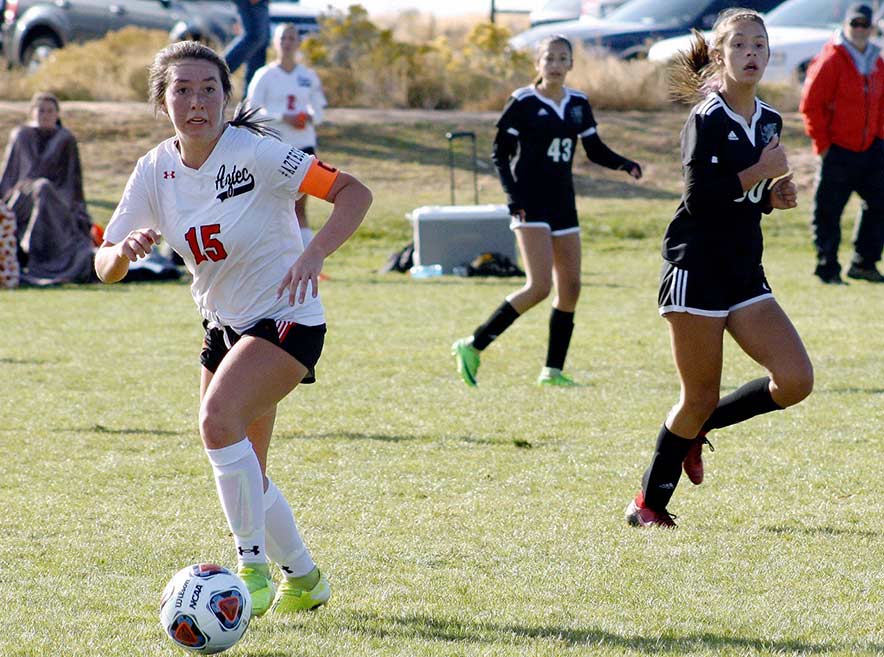 Eden-James Martinez learned at an early age that her passion to play soccer would take her places.

The Aztec High senior started playing the sport at five years old and when she reached the sixth grade she joined the Rio Rapids Girls 03 Premier team, a youth soccer group based out of Albuquerque.

Through her club, Eden-Martinez got the needed exposure to help her land an athletic scholarship as she is headed to play for the Oklahoma Panhandle State University women’s program next fall.

“This is big and it’s something that I’ve been wanting for so long,” she said of signing. “As soon as I realized that going to college for soccer could be on the table I put in the work to get this opportunity.”

“I think it’s really well deserved,” her mom, Elise Martinez, said. “This is something that she has been working on for a really long time. She’s made a lot of social and emotional sacrifices to be able to put forth the effort that she needed to do to be able to be seen by coaches.”

Elise said she was real proud that her daughter was able to see this through as she credited the Rio Rapids team for helping her daughter improve her skill set.

As part of the Rio Rapids team, Eden-James said she got a chance to travel everywhere and it helped her mature as a player.

“It’s taken me to so many places and it really humbled me coming from a small town,” the 2019 Navajo Times’ Soccer Player of the Year said. “In Aztec, I’m like a big fish in a small pond but when you go to other states and play girls who are as good as you, or even better, it’s a humbling experience.”

And although she wasn’t the best player out there, Eden-James said it made her want to grow.

“The biggest thing for me is I want to get to my peak and stay there as long as I can,” Eden-James said. “I’m nowhere close to that but I think college is going to really bring that out for me having to battle girls that are possibly two, three years older than me.”

With the OPSU women’s program still in its infancy, Eden-James is expecting to contribute immediately.

“The program is really new,” the center back said. “Everybody on the team is pretty young. I think it’s a good program to go into so that I can be an impact player right away.”

Besides the opportunity to play right away, Eden-James felt the town of Wells, Oklahoma, was the right fit for her.

“I had other offers but the biggest factor is definitely the location,” the criminal justice major said. “I think it’s the ideal location and it’s a small town, kind of similar to Aztec. I definitely don’t want to have that culture shock going into college, knowing that I was leaving home.”

And while she’s happy that her daughter is going off to college, Elise said she is feeling a bit antsy about her daughter leaving the nest.

“I don’t think any parent is ever ready for that, but in saying that I am really excited for her,” she said. “I’m looking forward for her to be able to get out of this community and start to spread her wings as she takes on her next challenge.”