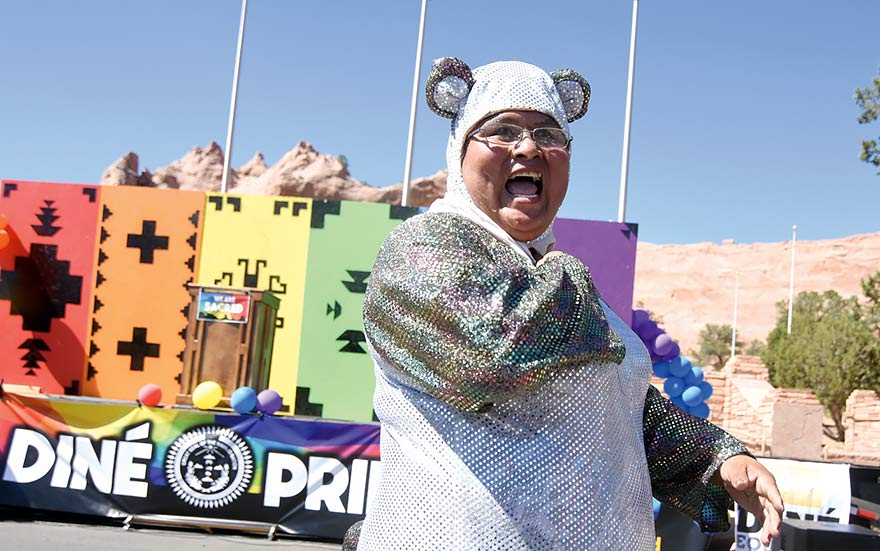 Navajo Times | Ravonelle Yazzie
Mattee Jim is not only the hostess for this year’s Diné Pride, one of the honored champions, an HIV prevention advocate but also a renowned entertainer.

The focus was supposed to be legislation proclaiming the third week of June Diné Pride Week, but the debate during Thursday’s Naabik’iyati Committee meeting shifted toward whether a special week to honor LGBTQ Navajos is even necessary or worthy of celebration.

Sponsored by Budget and Finance Committee member Nathaniel Brown, the legislation (0140-20) was approved 12-9, and it goes next to Navajo Nation Summer session this upcoming week.

“We do have our relatives here on the Nation who were born and identify as LGBTQ,” Brown said. “Basic human rights are not covered. We see a lot of inequality on the Navajo Nation for our LGBTQ brothers and sisters out there.”

Resource and Development Committee Chair Rickie Nez asked why is there a need for this legislation, especially after Damon had signed a proclamation. After botching the letters “LGBTQ” (which stands for stand for lesbian, gay, bisexual, transgender, and questioning or queer) while talking, he said veterans and elders aren’t honored and maybe a week should be designated for these groups.

“All lives matter,” said Nez. “Our veterans served our country, they fought for the very freedom we abuse each other with — our freedom of rights and speech. We write whatever we want to write, and say whatever we want to say to people … They fought for these freedoms, and yet we are not thankful for them. I don’t think we need a whole week to recognize a certain group of people.”

Health, Education and Human Services Vice Chair Carl Slater emphasized that a week devoted to Diné Pride is needed because it supports those who are not recognized and experience prejudice from the Navajo government.

“We are a diverse Nation and we have an obligation to figure out as a governing body how all those peoples can live in harmony on the Navajo Nation,” said Slater. “I call on my colleagues to really deeply perform some introspection and listen to the viewpoints that are different from theirs, not seek to highlight all the different identities that people have and say, ‘Because they did this they deserve this or that.’”

Law and Order Committee member Eugene Tso said in his viewpoint everyone is respected, appreciated and encouraged, and he didn’t understand where this conversation is coming from.

A confounded Slater said hearing from his colleagues only reaffirms the need for them to perform some introspection and challenge their perceptions. He noted that when he surveyed his colleagues about gay marriage and rights he was met with “incredible homophobia.”

“They echo some of the worst sentiments in American society today,” said Slater. “The only people who are saying ‘All Lives Matter’ are white supremacists at the highest level. Listen to the young people. We need to listen to their experiences.”