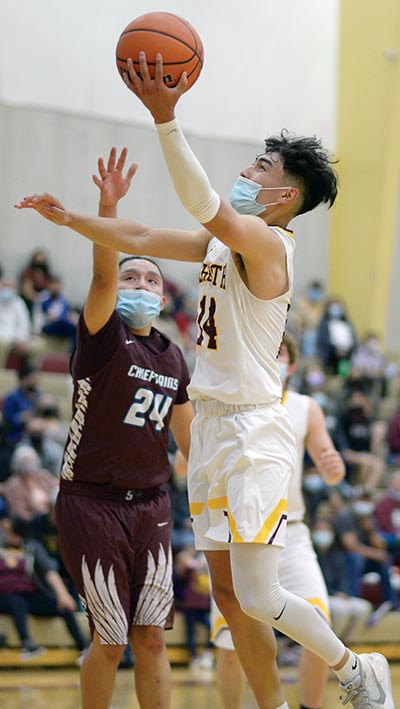 The Shiprock boys’ basketball team scheduled a trip to Rehoboth for one of its two nondistrict games.

The 4A Chieftains left the Rehoboth campus on Tuesday night lauding the play of the 2A Lynx as Rehoboth stunned the visiting team with a 64-49 win.

“Hats off to the Rehoboth Lynx,” Chieftains coach Chester Atcitty Jr. said. “They’re a good ball club and they played very well. They were ready for us and you could see that during the warm-ups with how they were shooting.”

Rehoboth coach Kevin Zwiers said hosting Shiprock was a good way to measure his team’s progress as the Chieftains matched the Lynx in skills, size and athleticism.

“They’re a great opponent and they gave us that big push at the beginning of the year,” he said. “I’m super excited that they were willing to come down here and play us.”

The Chieftains provided that push Zwiers was looking for as his team never backed down.

“We came into this game with the utmost confidence,” Rehoboth guard Talon West said as the junior playmaker finished with a game-best 27 points, which included 14 in the fourth quarter.
“We got a great group of guys and tonight we got the job done,” he said.

Senior post Jake Zylstra said it took a team effort to beat a good Shiprock team, especially when they faced some adversity with foul trouble in the second half.

The Rehoboth center picked up his fourth foul and had to watch the game from the sidelines with his team leading 40-32 with 3:38 left in the third.

With Zylstra on the bench, Rehoboth had to go deep into their bench and, despite having some young talent on the court, the Lynx surged ahead with a 54-39 cushion in the early going of the fourth.

“It was fun seeing how our group of guys were able to knock down some shots,” Zylstra said. “That is huge to see, especially with me on the bench.”

And although Zylstra finished the contest with six points, the Lynx had others step up.

Senior Shannon Dale had 20 points for the Chieftains, who were hurt by 19 turnovers.

“That’s the way it goes sometimes,” Atcitty said. “One of things we talked about was complacency. We can’t take that for granted and tonight we just didn’t move very well.”

Dale had the hot hand early as he scored half of his points in the opening quarter. He got Shiprock on board first with a trey for its only lead of the contest.

The Lynx, however, answered with a 6-0 run before the game was tied two times with the last coming at 11-all on a free throw by Dale with 3:16 showing on the clock.

Rehoboth closed out the period on a 7-2 run with junior guard Talon West scoring four points while Isaac Zwiers added a trey for an 18-13 cushion.

The Lynx extended that margin to as much as 17 points in the early going of the second as they made 5-of-8 baskets, which included a pair of inside buckets from senior post Jake Zylstra.

Shiprock, meanwhile, was held scoreless as they coughed up the ball three times as Rehoboth opened up a 30-13 advantage on a trey from senior Casey Joe with 4:08 remaining until the half.

“Jake was so instrumental in dicing apart that zone that they were playing,” Zwiers said. “And then for him to go out with four fouls, it was like ‘Boy, what’s going to happen?’

“But I’m super happy with our young guys,” the Rehoboth coach added. “I’m just so pleased with how those guys stepped up and competed. They just didn’t hold the lead, they extended it.”

Zwiers said playing a marquee matchup with Shiprock is going to pay dividends later in the season as the Lynx are looking to make gains from last year’s state playoffs.

Rehoboth got as far as the second round before they were ousted by eventual state champion Pecos by an 80-47 count.

“We had a good season last year and then we ran into that buzz saw with Pecos,” Zwiers said. “They played at a whole different level and that loss kind of woke us up. It motivated our guys to try and get to that level that we need to be at.”

West said losing to Pecos by 33 points left a bad taste in their mouths and they are looking to get far in the playoffs this year.

“Not only did we put in the hard work and effort, we did it through quarantine,” he said. “It’s been a weird way of getting the guys together but we came away from the Pecos game knowing what they did and we wanted to achieve something like that and have fun.”

Zylstra said the sky’s the limit on what this team can accomplish in this shortened season. He stated that while emphasizing the importance of team unity.