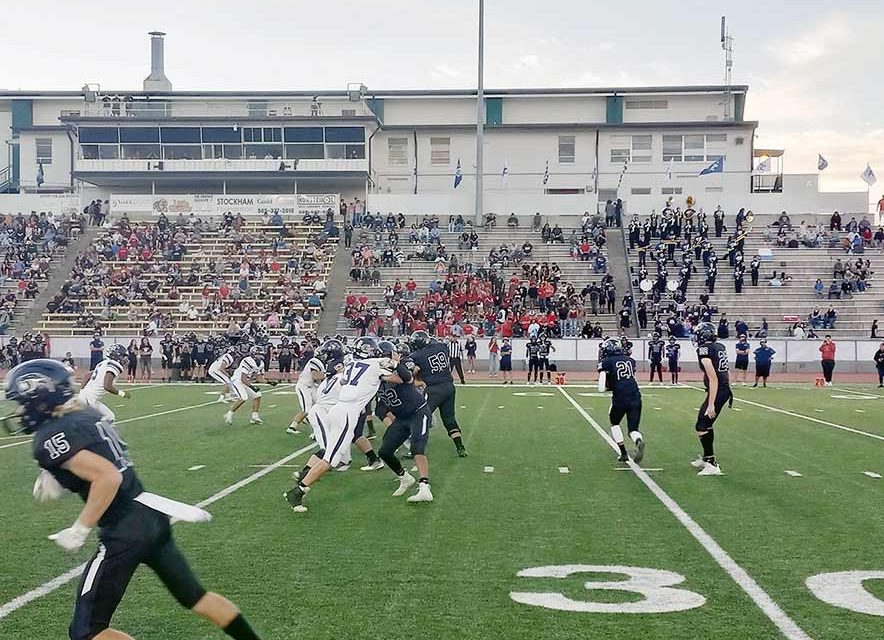 Navajo Times | Quentin Jodie
The Piedra Vista football team scored in waves against Roswell Goddard last Friday to the tune of a 47-29 win. The Panthers will play No. 5 Albuquerque Valley on Saturday on the road.

Adhering to its mantra, the Piedra Vista football team kept pounding away.

The top-ranked Panthers scored in waves last Friday night upending No. 4 Roswell Goddard 47-29 in a matchup between two of the top 5A teams in the state.

Of 10 possessions, PV scored in seven to improve its record to 5-0 overall.

“I thought the offense played tremendously well,” PV coach Jared Howell said. “I can’t say enough about how they played. You know, we just answered every (Goddard) play with another big play.

“That was huge for us tonight because this could have really been a problem if we started sputtering or lost focus offensively,” he said.

The Panthers finished the night with 407 yards with 272 in rushing. Senior running back Zach Mora-Dotson had nine carries for 179 yards and three touchdowns.

Manuel Montelongo added 49 yards on two carries and a score.

“We got the ability to spread the field and we got two really physical fullbacks,” Howell said. “We got a little speed on the edge that can help us get on the edge when we need that, but then we’ve been able to throw the ball, so it’s a tough task to handle.”

By spreading the field, PV baffled the visiting Rockets with coverage as the Panthers had several big gains.

“But they have to pull people out in order to cover you effectively,” he said, “you’re going to see the effects of the run game.”

That scheme was pretty evident early in the contest with PV racing out to a 19-7 lead.

After forcing a punt, the Panthers completed a six-play, 56-yard drive with Howell hitting Vigil for 51-yard scoring strike.

An interception gave PV good field position and they took full advantage with Montelongo going 47 yards on the first play from the line of scrimmage for a 13-0 cushion.

The Rockets cut that lead down to six on a one-yard TD run from Cesar Fierro with 40.6 seconds left in the opening frame.

Both squads added a TD each in the second with Mora-Dotson scoring the final 12 yards of a 67-yard PV drive for a 26-7 halftime cushion.

The Rockets did have an opportunity to cut into that margin, but Mora-Dotson came up with a huge interception just as time expired inside the end zone.

That interception was one of four first-half turnovers committed by Goddard.

Unlike the opening half, the Rockets hit the paydirt on its first three possessions to start the second.

Nonetheless, PV had an answer with Mora-Dotson scoring two TDs, a 19-yarder and 76-yarder all in the third.

And while the offense was hitting on all cylinders, the PV coach had some concerns with the defense as the Panthers gave up some big plays.

“Defensively, we were great, then we were poor,” Howell said. “Now credit Goddard. They put us in positions for us to make mistakes, and we made some mistakes in the secondary.

“That has to be corrected,” he said. “We’re too good in the back end for that to happen, but we just got bad discipline with our eyes.”

PV cornerback Jacob Schreuder said those defensive lapses are correctable and they hope to have those shored up when they play No. 5 Albuquerque Valley on Saturday.

“We did struggle with communication, and we’re gonna clean them up so that doesn’t happen on us when we play Valley,” he said. “I’m glad the offense picked up the slack and they did an amazing job.”

The game on Saturday will be PV’s first true road game of the season. Earlier this year, PV was the designated visiting team when they played city rival Farmington.

Following that contest, PV will make the six-hour drive to Roswell to play the No. 2 Coyotes.

“We told them that these next three teams – Goddard, Valley and Roswell – are all top five teams,” Howell said. “This is really basically like playing in the playoffs. We’re playing teams that are going to make the playoffs right now, so, yeah, it doesn’t get any easier.

“It’s going to challenging, and we knew this schedule was gonna be tough at the beginning of the year,” he said. “But the kids are playing well, and the coaches are doing a great job.”

While not getting too far ahead, Howell said they still have to earn their way into the playoffs playing the likes of Miyamura, Belen and Highland in District 1/5-5A play.

“We still got district to play,” he said. “Miyamura and Highland are definitely improved teams from last year. We’ve seen them on film and they’re better than they were last year.

“Belen’s got a new coach and I haven’t got a lot of film on them, so we’re trying to figure Belen out,” he said. “They have good athletes and they have a pretty good tradition, so I expect to get everybody’s best and we’re not expecting anything less.”