In her first year she was named MVP for the Yankee Small College Conference, a first in the college’s young volleyball program. And a week ago, she earned 1st Team All-American status, being named one of the best in the country.

“All of these achievements mean that my aunt and my mom, what they taught me when I first started playing volleyball, has paid off,” Begishe said. “Playing the sport I love comes with big things and if you love the game, play the game and that’s what I did.

“The more I kept playing, it meant a lot to me and I think this means that I’ve done something right especially in sports.” 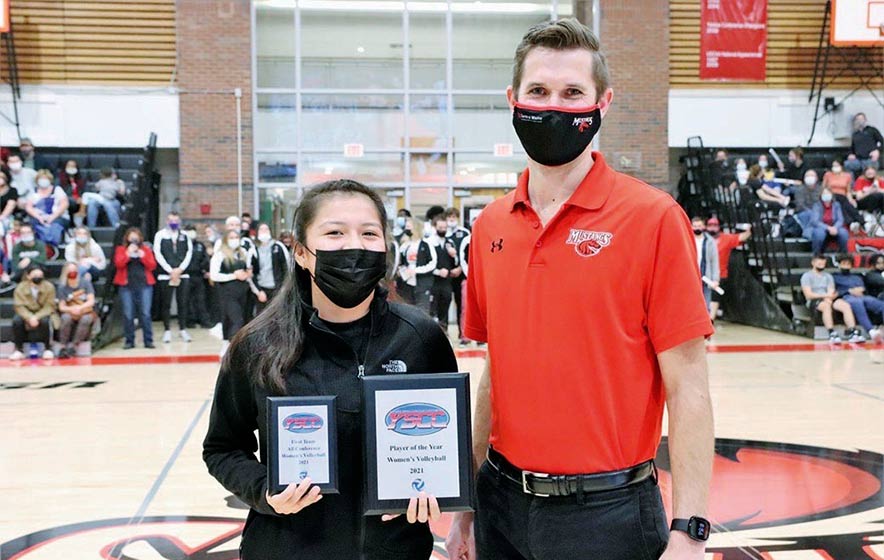 Begishe said she was surprised when she won the achievements, never imagining her first season in college would be so successful.

She said it was rough for her traveling across the country and playing with a new team, but she continued to put in the work.

She was made a team captain for communicating effectively with the team and seeing the floor and the plays.

Playing as outside hitter, she recorded a total of 144 kills. She was credited with helping the team progress through the season and giving the Mustangs one of its best seasons.

Begishe grew up playing volleyball most of her life, learning it from her family. She played volleyball in high school, but when schools were cancelled the previous year because of the COVID-19 pandemic, she played with the Shonto Starlings volleyball club where she got recognition from scouts.

She is currently studying physical health fitness and hopes to earn a bachelor’s and become a volleyball coach. She’s already coaching a volleyball club in Maine: the Lewiston Maine Volleyball. She said volleyball helps build character and the sport has changed her life.

Playing collegiate volleyball is different from high school as it puts more expectations on her and she also has to be more responsible by going to the gym and getting her studies done as well.

Her first year was complicated by the pandemic. The college follows guidelines, which includes wearing a mask and social distancing.

Begishe said it can be frustrating training hard while wearing a mask. However, she and her team followed all the regulations and remained safe.

She is already looking forward to the coming year, feeling that her team will get only better overtime and with experience. She applauds her teammates for their dedication and work ethic. A lot of her teammates had to play outside their comfort zone as they were a small team, but they adapted.

Begishe strives to continue working hard and being a positive role model for the incoming athletes as well as any high school girl who is looking up to her for inspiration.

“Growing up it’s been tough playing sports,” Begishe said. “It was just me, my aunt and my mom who tried to teach me as much as they could.

“It will be a struggle,” she added, “but continuing to play what you love, it will get you far in life.”